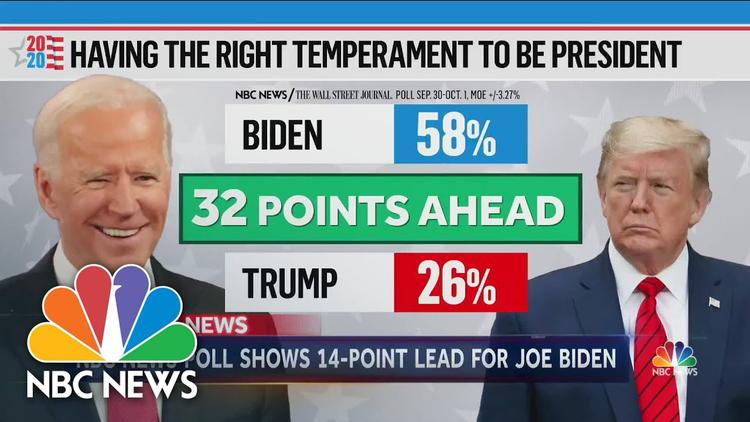 Ann Arbor (Informed Comment) – Those observers asking whether Trump would get a bounce of sympathy from falling ill with COVID-19, the way Ronald Reagan saw his popularity soar after he was shot and had to be hospitalized, now have their answer.

An October 2-3 opinion poll conducted by Yahoo and YouGov from Friday-Saturday, when the public knew about Trump having fallen ill, found that they blamed him.

This result is not surprising. Reagan wasn’t doing anything reckless when he was shot by a mentally unhinged assailant. And although I deeply disliked his politics, I have to admit that Reagan was personally likeable. When he regained consciousness and Nancy was there by his side, he quipped, “Honey, I forgot to duck!”

Trump, not so much. His reckless SUV turn outside Walter Reed was just for show, and put his Secret Service detail in danger. They’ll have to quarantine from their families and colleagues for 14 days, now.

59% of respondents said that Trump has not been social distancing or wearing a mask appropriately, while only 20% answered the question in the affirmative.

And, by 52% to 18%, Americans believe that Trump could have avoided falling ill if he had worn a mask and practiced social distancing.

They think it is his own damn fault.

More bad news for Trump: Not only did people strongly disapprove of his bullying and interrupting in the debate with Joe Biden, but we saw a 15 point swing away from Trump by independents in the aftermath, according to Andrew Romano at Yahoo News.

Let’s review the more recent Yahoo/ YouGov poll. Likely voters thought Biden would do a better job in handling the coronavirus than Trump by 48% to 39%, a nine-point spread. Among African-Americans, that spread was 73% to 9%! And among Latinos it was 62% to 14%. Between them, they are about a third of the US population. For women, who are half the population, Biden beats Trump on this issue 48% to 35%.

By a margin of 15 points, likely voters believe Biden would have done a better job dealing with the pandemic.

All this matters because 67% of likely voters say they are worried or very worried about the coronavirus. Among minorities that figure goes up to 82%. We know that African-Americans and Latinos have been disproportionately affected by the pandemic.

Among likely voters, 82% report wearing a mask when they go out always or some of the time. They are lying, and likely are reporting what they think they ought to do. Most estimates are that only 48% of Americans wear masks when they go out, compared to 82% of Chinese and 98% of Hong Kongese. Guess who has the lowest case and death rates.

Some 71% of likely voters say masks should be mandatory. Even in the general population, 69% hold this position. I’m shocked. I thought there was more polarization on this issue.

Interestingly, those polled admit that less than half of Americans wear masks, so they seem to think that those other people aren’t doing it right.

Although these polls are heartening for Biden, we must always remember that the election is not decided by national opinion polls. The election will be much more narrow in swing states like Ohio and Wisconsin. Moreover, people often lie to pollsters, saying what they think polite company would expect them to say rather than what is in their hearts. No one who really wants Trump gone can be complacent, and only actually voting, not answering pollsters’ telephone calls, can accomplish that objective.