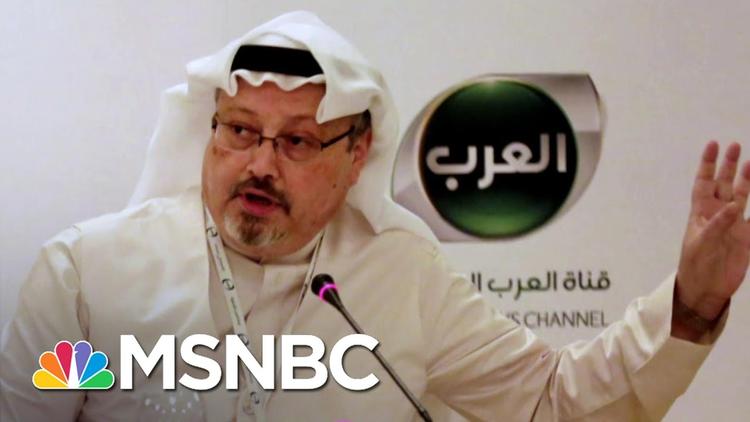 The Biden-Harris campaign releases a statement on the two-year anniversary of Khashoggi's murder stating that his death "will not be in vain." https://t.co/ZYEmx5kMem pic.twitter.com/rsl7pOWZEP

( Middle East Monitor) – In an interview a few days after the murder of Jamal Khashoggi two years ago, Republican Senator Lindsey Graham called Crown Prince Mohammed Bin Salman of Saudi Arabia a “wrecking ball” as a diffused congruence of evidence unfolded, all pointing to the fact that the Washington Post journalist was killed inside the Saudi Consulate in Istanbul.

“I know this, nothing happens in Saudi Arabia without [Bin Salman] knowing it… He had this guy murdered in a consulate in Turkey and to expect me to ignore it… I feel used and abused. I was on the floor every time defending Saudi Arabia,” Graham told Fox. “I think he’s on a bad track. I can never do business with Saudi Arabia again until we get this behind us… I feel personally offended. This guy has got to go. [Bin Salman] has tainted your country and tainted himself.”

Like many of his colleagues in the Senate, Lindsey Graham was a staunch supporter and defender of the US alliance with the ruling Al-Saud family in Riyadh, a support tested briefly by the international debacle that was the murder of Khashoggi, who had permanent US residence rights. However, it is not the support of alliances that requires re-visitation, rather, it is the means by which these alliances persist.

The past few years under the Trump administration have seen a solidifying of US support for Arab authoritarians – from Mohammed Bin Zayed of the UAE to Abdel Fattah Al-Sisi of Egypt and Bin Salman of Saudi Arabia. Specifically, the current US administration was critical of the latter’s appointment as crown prince. The now de-facto leader of Saudi Arabia was not in direct line to the throne; it was collaboration between — amongst others — Jared Kushner, a senior advisor to US President Donald Trump, and Bin Zayed that led to Bin Salman’s unprecedented rise within the Saudi hierarchy. At what cost does the US bolster such dictatorial figures, though?

Washington’s support for authoritarian figures and regimes is a short-term strategy, one that will ultimately cost the United States the loss of public support in these countries. In an interview with Al Jazeera just over a year ago, Abdullah Alaoudh, son of imprisoned Saudi scholar Salman Al-Odah, argued that, “If you [the West] want to establish a real alliance with Saudi Arabia, if you want to make sure that you have a stable relationship, (or) a long term alliance, you have to establish that with the Saudi public who will be there forever.”

A focus on establishing relations with the people of these states rather than exclusive relationships with illegitimate rulers is one that ought to guide future US foreign policy towards the Middle East-North Africa (MENA) region. It was towards such a refocus that Khashoggi was striving.

Khashoggi was the archetype of the “good-willed and optimistic reformist”, the “beneficent citizen”. He — and thousands like him – believed in miniscule yet gradual reform from within the Saudi Arabian elite. With this in mind, he attempted to utilise the connections he had made with government officials throughout his tenure as a media consultant at the Saudi Embassies in Washington and London.

Specifically, Khashoggi was impressed by the Kuwaiti experience and saw it as a model that could be applied in Saudi Arabia and the rest of the Gulf; a constitutional monarchy where the royal family retains its status, and the people participate actively in parliament. His attempts to advise and encourage reform, though, were met with absolute rejection, leading to his eventual killing at the hands of the new crown prince.

Khashoggi’s death on 2 October 2018 was a wake-up call for the international community, a moment of realisation that the audacity and brutality of the current Saudi crown prince and his authoritarian counterparts in the region are irrational and unprecedented. That realisation ought to remain in the conscience of a potential Joe Biden administration and it should guide consequent US foreign policy.

Mohammad Bin Salman and his ilk should be held accountable for their crimes, but the status quo remains devoid of liability. The Khashoggis of the region will face a similar fate if the same road continues to be travelled, but US foreign policy can and should refocus and turn its attention to those who support reform in the region and embrace the popular will.

Sometimes that can mean — as Khashoggi eluded to — a fusion of Islamic and democratic principles that the West has long acted against. One example of his thoughts on this came just about a month before his murder in the Saudi Consulate in Istanbul, in one of his final articles: “The US is wrong about the Muslim Brotherhood, and the Arab world is suffering for it.” Khashoggi argued that America’s aversion to the Brotherhood is the root cause of a major predicament across the entire Arab world.

The eradication of the movement — or its forced removal from power and the prevention of it getting there in the first place, as Khashoggi saw it — was a fatal mistake that the Barack Obama administration made when it gave tacit approval to the 2013 coup that overthrew the first democratically elected government in Egyptian history. In doing so, the US publicly renounced its long-established desire for democratic proselytisation, all for the sake of the short-term interest of ensuring victory for favoured candidates.

Khashoggi saw that US approval of this act against the popular will would ensure the continuation of the avoidable causes of revolutions, extremism and the international refugee crisis. And the Egyptian story is merely one of many cases of US complicity in anti-democratic military coups and massacres.

In essence, American acceptance and support of anti-democratic institutions within these states will come back to haunt future administrations which must come to terms with a newly liberated people. A Biden administration would have an opportunity to turn the tide on American complicity in authoritarian rule. The MENA region will inevitably witness the continuation of a wave of popular demands for democratic reforms and wider human rights, and the US response will undoubtedly play a major role in their success or failure.

An administration with foresight in Washington can correct previous miscalculations, abandoning the short-term gains of alliances with totalitarian regimes, and choosing instead to accept the popular will as a long-term investment in both US national interests and the interests of the people across the region. In short, a Biden administration could ensure that Khashoggi’s death was not in vain.

Abderrahmane Amor is a former staffer of the Bernie Sanders for President Campaign and a PhD student at the Department of Political Science at Texas Tech University.