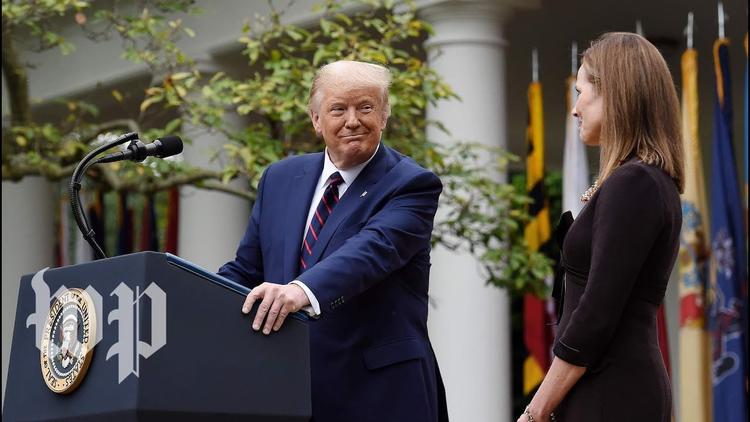 Ann Arbor (Informed Comment) – In the twenty-first century’s biggest irony so far, last Saturday’s ceremony for the nomination of Amy Coney Barrett to the Supreme Court may have been a coronavirus superspreader event among the Republican Party elite. So suggests Oliver O’Connell at The Independent.

It is an irony because that gathering was a stealth way for the superwealthy to celebrate the sealing of the fate of President Obama’s Affordable Care Act. Barrett takes a dim view of the ACA, though how exactly she would rule in November is hard to predict. Certainly Trump wants her to strike it down and hopes she will. They were now confident that they could deprive an estimated 23.3 million Americans of health insurance, and so avoid the taxes on the rich that pay for it. They also want to deprive 55 million Americans of coverage for their pre-existing conditions. The number of Americans to be thrown into the street when it comes to health care has grown during the pandemic.

Even as they were plotting against Americans’ health, the Republican elite were breathing in malicious strips of RNA (ribonucleic acid), otherwise known as the novel coronavirus. The nomination event was closely packed and few wore masks, with typical Republican recklessness or ignorance. Senator Mike Lee went around unmasked and hugging people, breathing in their faces.

It turns out that not everybody is effective at spreading the coronavirus. Just because someone has it doesn’t mean they necessarily spread it around a lot. As Zeynep Tufekci argues in The Atlantic, the strange distribution of the outbreaks argues for seeing them as superspreader events.

Rather, a large portion of the transmission comes from superspreaders, ill people who for some reason are especially contagious. Barrett’s nomination was possibly a superspreader event for Republicans. The president of Notre Dame came out to support Barrett, and disdained wearing a mask, and now he has the disease. Hope Hicks, the Trumps, Republican senators Mike Lee and Thom Tillis, publicist Kelly Ann Conway, Republican National Committee chair Ronna McDaniel, were all there and are now all sick.

Another irony: Senators Lee and Tillis being ill may make it impossible to confirm Barrett before the November 3 elections.

Barret belongs to a secretive far right wing cult that believes in faith healing. I do not know if she shares that belief with her fellow congregants or whether she takes unrealistic comfort in the ability of people to wish away diseases, underpinning her opposition to the Affordable Care Act.

Even the ACA is insufficient to address seriously the health care crisis, since it ties health insurance to employment, and 8 percent of American workers are unemployed at the moment, i.e. 12.6 million people. No work, no health care insurance for them and their families–which I suspect affects about 25 million Americans (workers in the work force typically account for a little less than half of all Americans). CNBC confirms that about 12 million American workers have lost their health insurance during the pandemic.

In addition, the 2.3 million workers who have stopped looking for work since February out of despair at finding a job in the midst of a pandemic are not even counted in those statistics. The US government and economists define “unemployment” technically as workers without employment who have looked for work within the past four weeks. There are in total 7.2 million people who would like a job but haven’t formally applied for a job in the past month, which is 2.3 million more than in February. Those 2.3 million have lost their jobs and stopped looking for a new one. Again, I suspect that those 7.2 million, not counted as unemployed, account for 14 million Americans without health care insurance.

If the Democrats take the White House and the Senate, they need to craft revisions to the ACA that allow the unemployed to get affordable health care, and the ACA needs to be redone so that its cost doesn’t depend on the cooperativeness of Republican governors and state legislators. And they need to assert themselves against the 6-3 conservative Supreme Court to prevent unelected lifetime nominees of the far right Federalist Society from ruining the lives of tens of millions of Americans.