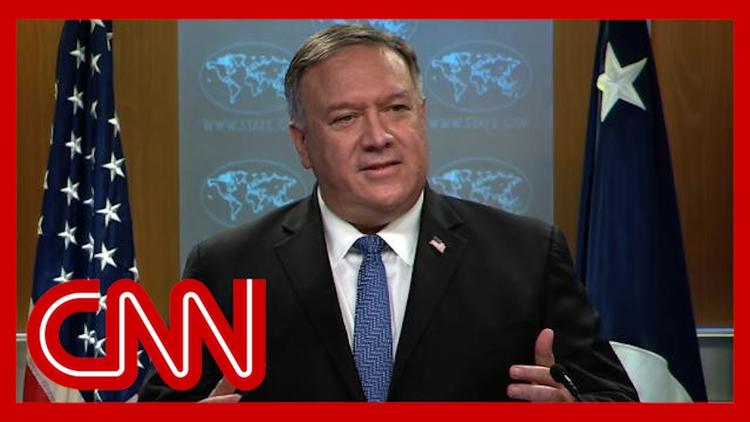 Ann Arbor (Informed Comment) – Nicole Gaouette, Jennifer Hansler and Kylie Atwood at CNN report that secretary of state Mike Pompeo insisted there would be a smooth transition to a second Trump term. The statement, which appears to have been sardonic rather than in earnest, disgusted a lot of people, especially ambassadors. If it was a joke, it was a bad one.

Pompeo continued, “The world is watching what’s taking place. We’re gonna count all the votes. When the process is completed, they’ll be electors selected. There’s a process, the Constitution lays it out pretty clearly. The world should have every confidence that the transition necessary to make sure that the State Department is functional today, successful today and successful with a president who’s in office on January 20 a minute after noon, will also be successful.”

What hasn’t been emphasized enough is that Pompeo was first asked whether the refusal of the Trump administration to cooperate with the Biden transition team made the US look hypocritical to the rest of the world. He went into a hissy fit worthy of a two year old child, calling the question “ridiculous.”

The context for the question is that the United States constantly hectors other countries about not respecting the outcome of democratic elections. One of the duties of US ambassadors in other countries is to go in to complain to heads of state about little things like not respecting legitimate transitions of power. In fact, Pompeo’s own State Department produces an annual human rights report that attacked dozens of governments for disregarding the outcome of a democratic election.

Here is what Pompeo’s department said about Nicolas Maduro of Venezuela in its 2019 report:

“On January 10, the term of former president Nicolas Maduro ended. He sought to remain in power based on his claimed “victory” in the 2018 presidential elections widely condemned as neither free nor fair, a claim not accepted by the democratically elected National Assembly (AN).”

“On January 20, the term of former president Donald Trump ended. He sought to remain in power based on his claimed “victory” in the 2020 presidential elections which he widely condemned as neither free nor fair, a claim not accepted by the democratically elected electoral college.”

Or we could do China:

“The People’s Republic of China (PRC) is an authoritarian state in which the Chinese Communist Party (CCP) is the paramount authority. CCP members hold almost all top government and security apparatus positions… The CCP continued to dominate the judiciary and controlled the appointment of all judges and in certain cases directly dictated the court’s ruling. Authorities harassed, detained, and arrested citizens who promoted independent efforts to combat abuses of power.”

If you know the scam Mitch McConnell has been pulling with hundreds of poorly qualified judicial appointments, this paragraph seems to me a fair description of Trump’s Republican Party. You might object that the Communist Party of China does not contest elections, and is not willing to step down in the face of a majority vote against it. You might.

Or here is the language of the State Department about Iran’s disputed election in the summer of 2009:

“The government’s poor human rights record degenerated during the year, particularly after the disputed June presidential elections. The government severely limited citizens’ right to peacefully change their government through free and fair elections.”

Trump and Pompeo are, of course, right this instant severely limiting “citizens’ right to peacefully change their government through free and fair elections” by casting doubt on the legitimacy of the election.

Pompeo’s stupid joke about a second Trump administration put all the US ambassadors and deputy chiefs of mission all around the world in an impossible situation. How are they supposed to meet with foreign heads of state who have sidestepped the will of the people and tell them they have to be more democratic at this point? Several told CNN that they are “disgusted” at Pompeo’s remarks.

Trump and Pompeo do not respect the will of the people if it differs from their own will to power. They have for four years been trying to turn the United States into a banana republic. Let’s hope that instead, they slip on the peel.

CNN: “See what Pompeo said when asked about Biden’s victory”