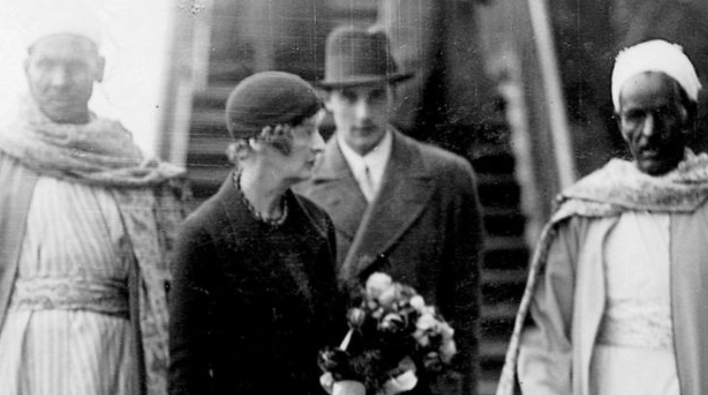 Middlebury, Vt. (Special to Informed Comment) – In 1934, Lady Evelyn Cobbold, a Scottish aristocrat and traveler, wrote that with the tightening of Nazi rule over Germany, many in England sensed that a European War was looming. Among the British elites ‘rumors of war’ were discouraged; the trauma and losses of the 1914-18 World War, and the need to avoid another war, were uppermost in people’s minds. European disarmament was the clarion call of the day.

Lady Cobbold’s response to the crisis in European politics was quite unusual. She made the case for a militarily prepared Britain in this way. “While all the world is discussing the vexed question of war and disarmament, it is perhaps well to give here the attitude of Islam on the subject: While Islam bans all aggressive wars, it permits such as are undertaken in defense of the life, property, and religious liberty of all denominations.” Lady Cobbold then turned to the second Sura of the Qur’an to make her case: “Fight in the name of God against those who fight against you, but begin not hostilities; verily God loveth not aggression.”

Invoking Islamic ideas to address a European political crisis was more than unusual at the time. Among British elites it was unheard of.

But Evelyn Cobbold was not citing the Qur’an as an outsider to Islam, but rather as a Muslim convert. In 1933, at age sixty-five, she performed the Hajj, the pilgrimage to Mecca, and a year later she published Pilgrimage to Mecca, an account of her experiences in Saudi Arabia. The British newspapers hailed her as “the first English woman on the Mecca Pilgrimage.” As she was widely known as a traveler and game hunter, the British press depicted her pilgrimage as something of a celebrity event, as in the Daily Express headline, “Woman’s Trousered Trip to Mecca.”

Evelyn Murray was born to aristocratic Scottish family in 1867. Her parents were the Earl and Countess of Dunmore. Their family seat was on the Isle of Harris. As a young child Evelyn, the eldest of six children, spent long periods of time traveling with her father, a noted explorer, hunter, and geographer. Summers were spent in Cairo, where the Murray family kept a residence.

Converts to Islam undergo a formal process of accepting the faith; but in Evelyn Cobbold’s case no such ritual was recorded, or ever mentioned by her. Later in life she said that she had always been a Muslim, had felt that way since her childhood, so there was no reason for her to undergo a formal conversion. In her twenties Evelyn took a Muslim name, Zainab, and when in the Middle East liked to be known as Lady Zainab. But, unlike many converts to Islam, she did not give up her Christian name or her ‘Western’ ways. She remained an avid and expert hunter and angler, often winning competitions in those fields.

Lady Zainab’s story and her 1934 book might have been forgotten but for the efforts of London writer and publisher William Facey and his co-author Miranda Taylor, an editor at the Royal Geographical Society. In 2008 they re-published Cobbold’s Pilgrimage to Mecca along with a richly-detailed biographical introduction.

Lady Zainab’s pilgrimage account pays considerable attention to Muslim women in general, and to the participation of women in the Haj in particular. Seeking to counter Western stereotypes of the era, she makes the case that “it is a mistake to think that the seclusion of women is an Islamic institution . . . Muhammad enforced as one the essential teachings of his creed respect for women.”

As to the institution of purdah, the seclusion of women in Muslim India and elsewhere, Lady Cobbold asserted that “the purdah system in India is no part of the Islamic Law. It is of Zoroastrian, Persian and Byzantine origin . . . also the lack of education among the greater part of the women is in direct contravention of the Prophet’s plain command.”

After her pilgrimage to Mecca Evelyn Cobbold – Lady Zainab spent most of her long life in London and at her family estate in Scotland. She remained in contact with other British Muslims, including her fellow-convert to Islam, Muhammed Marmeduke Pickthall.

On her death at age ninety-six in 1963, she was buried, according to her explicit instructions, on her estate in Scotland. A Muslim ceremony was conducted by a British imam. And on her tombstone a calligrapher inscribed the Light Verse of the Qur’an.