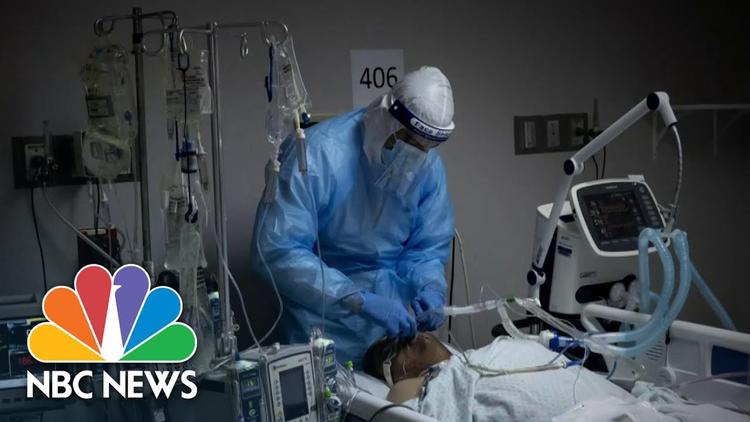 Ann Arbor (Informed Comment) – Holly Yan, Christina Maxouris and Theresa Waldrop at CNN report that the United States has passed the grim milestone of 250,000 deaths. Trump had predicted a worst case of 50,000 deaths last spring, but then Donald Trump could not find his ass with both hands.

Nor is the worrisome death rate in the rear-view mirror. Johns Hopkins reports that 1,707 Americans died of COVID-19 on Tuesday, more than on any other day ever. There were 161,000 new cases on Tuesday, more new cases than on any day ever before. It is estimated that 3 million Americans are walking around infected right now and spreading the disease. You guessed it. That’s more infected people than at any time since the infection broke out in February.

Cases are on the rise in all fifty states. Some states, however, are particular basket cases. Newsweek reports that North Dakota has the world’s worst death rate for COVID-19, what with 1 in every 1,000 residents having died of it. Republican governor of N. Dakota, Douglas Burgum, resisted a statewide mask mandate until last week. He is, by the way, the worst leader in the entire world on the coronavirus crisis, what with having policies that killed off one in a thousand of his people. He is a dotcom entrepreneur with no experience of governing, and his health department is also run by a businessman rather than medical personnel. Burgum resisted implementing social distancing measures on the grounds that that would represent the heavy hand of the government. When you have people in charge of the government who do not believe in it, they are unable to wield the government during a crisis that demands good governance.

A leaked internal White House task force memo admitted, “Current mitigation efforts are inadequate and must be increased.” The Guardian also quotes Dr. Anthony Fauci as saying, ““Community spread doesn’t stop spontaneously unless you do something about it.”

We have national community spread, folks.

I have been thinking about why Trump’s America is one of the worst countries in the world for dealing with the pandemic.

Obviously, there are many intervening variables. Age is the most important. Italy’s high death rate certainly has something to do with the high median age of its population. Old countries are more vulnerable than young countries, which may explain why the expected COVID apocalypse did not strike Africa.

Still, it is clear that some governments do a better job with it than others.

Our mass media tend to make everything into a matter of personalities, so it is easy to blame Trump. And, the Lord knows, Trump bears special responsibility. People often do not understand that he had tools with the Centers for Disease Control that could have tamped the virus down last spring, and that he for the most part refused to wield them.

But as the case of Burgum the Burier shows, it isn’t just Trump. Ron DeSantis in Florida is another huge failure in this regard.

The problem isn’t merely capitalism, though capitalism may be a big part of the problem. Still, Germany, South Korea, Taiwan and Hong Kong are all capitalist countries, yet they have very low death rates.

The worst countries in the world for mortality per hundred thousand population, according to Johns Hopkins, are below, with their gini coefficient (a measure of economic inequality):

It is suspicious that, with the exception of Belgium, the worst-hit societies are all capitalist and all have high degrees of inequality.

Obviously, we have to toss out countries with high gini coefficients and also very young populations, as not comparable.

So how might levels of economic inequality be related to high COVID-19 death rates? Well, I’m figuring on the back of a napkin here, but I think in unequal societies the wealthy are unusually powerful. Mitigation efforts are bad for consumer capitalism, and the conservative ideology of the business classes value property over the lives of individuals (especially poor or marginal individuals).

So I think this list of high death-rate/ high inequality societies may in part be a list of capitalist oligarchies, where the government has been told by the plutocrats not to interfere in business. In places like North Dakota, there isn’t even a difference between the libertarian-leaning business classes and the government.

In contrast, countries with managed capitalism and strong workers unions and a significant public sector are less unequal but also thus less under the thumb of the plutes. They can maintain the taxes that support strong local public health institutions, stockpiling of PPE (neoliberalism led California to sell its stock off), and can mandate shutdowns and other mitigation measures without being countermanded by big corporations.

If I am right about the correlation, our covid apocalypse may just be another signal that oligarchic capitalism is bad for people. And in that case we could conclude that Trump is a symptom of the disease.