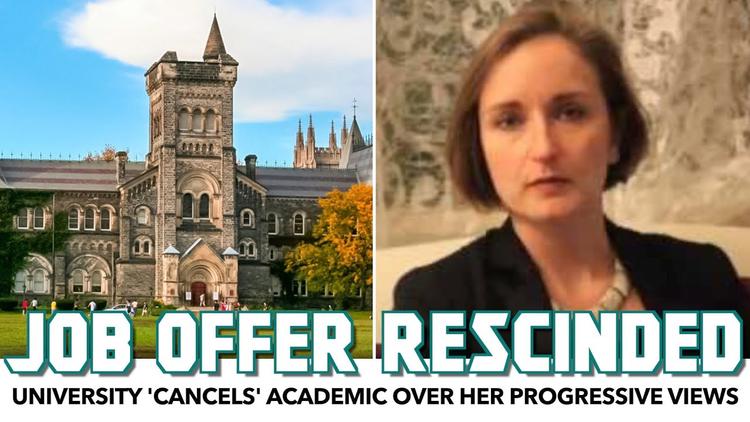 This summer controversy arose around the hiring of Valentina Azarova as the director of the University of Toronto faculty of law’s international human rights program.

Some faculty accused the dean of rescinding a job offer because public figures were uncomfortable with her scholarly criticism of Israel’s human rights record.

This incident is particularly concerning to scholars who conduct research on Palestine and Israel. Many see it as part of a growing trend to equate criticism of Israeli state policies with antisemitism.

Globally, scholars who criticize Israel are facing an increasingly uphill battle to protect their academic freedom.

At the heart of the issue rests the new definition of antisemitism by the International Holocaust Remembrance Alliance (IHRA). Proponents of the IHRA definition are part of what some are calling a new antisemitism movement that seeks to label criticism of Israel as antisemitic.

While challenging antisemitism is vital, Canadian critics of the IHRA definition argue that the new language could “chill political expressions of criticism of Israel as well as support for Palestinian rights.”

The IHRA definition is vague. It fails to connect antisemitism to other forms of racism. It also appears more intent on silencing critics of Israel than halting antisemitic threats from far-right white supremacists.

A series of open letters by scholars have warned against adopting this definition, including in Canada, the United Kingdom and Israel.

The main issue with the IHRA’s definition of antisemitism is not its short 38 word definition, but the 11 illustrative examples of anti-Semitism. Seven of these examples equate criticism of Israel with antisemitism. Two of them reference Israel without mentioning Jewish people.

Israel should be subject to the same critiques as other nations.

One of the original draftees of the IHRA definition, Kenneth Stern, now says that the new language “weaponizes” the definition of antisemitism.

Earlier this year, in Germany where the IHRA definition and its illustrations have been adopted nationally, renowned scholar Achille Mbembe (currently teaching at the University of the Witwatersrand in Johannesburg) was accused of racism and antisemitism by public figures and institutions because of his support of the BDS movement. BDS (Boycott, Divestment, Sanctions) is a Palestinian-led movement for the freedom, justice and equality of Palestinians.

In the United States, where various jurisdictions have adopted the IHRA working definition, investigations of alleged antisemitism have been launched at several institutions. These include: Rutgers University, Duke University, the University of North Carolina and Williams College, with another possible investigation into New York University.

In each case, the “antisemitic speech” being investigated is criticism of Israel.

In the U.K., universities face funding cuts if they do not adopt the IHRA definition. Universities have cancelled events, punished faculty and expelled students who criticize Israel.

Websites run by neoconservative campus groups demonize, harass and intimidate scholars who support Palestinian rights, support BDS and are critical of Israel’s policies. These targeted attacks have a chilling effect on classrooms, research and campus politics.

On Canadian campuses, student governments at Ryerson University and McGill University have adopted the IHRA definition of antisemitism in their anti-discrimination policies. This will potentially allow them to deny critics of Israel access to campus resources.

A recent conference at the University of Winnipeg focused on the Trump administration’s decision to move its embassy in Israel to Jerusalem. Citing the IHRA definition, the university condemned the conference and declared certain statements expressed at the conference to be a violation of the institution’s anti-harassment policy.

On Oct. 26, the Ontario government led by Doug Ford abandoned its controversial private members’ Bill 168 “Combating Antisemitism Act” and instead used Order in Council 1450/2020 to adopt the IHRA definition. An order-in-council is an executive decree that effectively shuts down the legislative process, including public discussion on the bill.

The order-in-council recognized “the working definition of antisemitism, as adopted by the International Holocaust Remembrance Alliance (IHRA).”

While Bill 168 was still under consideration by the Standing Committee on Justice Policy in Ontario, faculty unions across the province passed motions to oppose it.

It is unclear whether or not Ontario’s adoption of the IHRA working definition includes the illustrative examples. Without a clear position on this, academic freedom in this province remains vulnerable to political interference.

Arguments made by many of the world’s leading scholars contain statements that are critical of Israeli state violence and racism. This writing could easily be censored as antisemitic under the new definition.

Under this type of legal censure, professors could be at risk for teaching influential Jewish scholars such as Hannah Arendt and Judith Butler, the post-colonial legend Edward Said, Black liberation scholar Angela Davis and a long list of other scholars because of their critical work on Israel.

Canada’s federal government has adopted the IHRA definition and its examples, and it is possible that other provinces and institutions may feel pressured to follow suit.

Equating criticism of Israel with antisemitism undermines the ability of scholars to engage in important anti-racist and decolonial work.

The Rational National: “University ‘Cancels’ Academic Over Her Progressive Views”