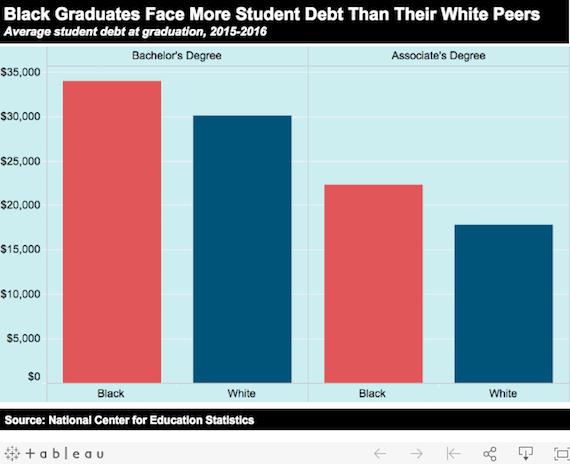 By Sarah Anderson and Margot Rathke | –

( Inequality.org) – Washington is abuzz with ideas for actions the Biden-Harris administration could take that would not require Congressional approval. One of the buzziest: cancellation of student debts owed to the federal government.

The U.S. Department of Education owns about 92 percent of the $1.6 trillion in U.S. student loans and many legal scholars say the Department has the authority to wipe these burdens away with the stroke of a pen.

“This is the single most effective executive action available to provide massive consumer-driven stimulus,” Senator Elizabeth Warren wrote in a Washington Post op-ed.

Back in September, Warren joined with Senate Democratic Leader Chuck Schumer to call on the next president to cancel up to $50,000 in federal student debt for every borrower in the United States. That would eliminate loan obligations for more than three-quarters of the approximately 44 million Americans with student debts.

Meleiza Figueroa is one of those many millions. The first in her family to graduate from college in the United States, she worked hard and was lucky enough to receive scholarships. But as the cost of living soared and wages stagnated, she still had to take out tens of thousands of dollars in loans.

“As a working adult in this country, I’ve had to decide between daily food, medicine, shelter, and paying off this debt — and daily survival will win out every single time,” she said on a November 13 webinar organized by the Congressional Progressive Caucus Center.

Now the National Coordinator of the Student Debt Campaign, Figueroa explained that debt cancellation would help her generation “fulfill our potential and contribute not just what little we can, but the best we can to society.”

Both Figueroa and Warren point out that student debt cancellation would help narrow the racial wealth gap. On average, Black students have to take out larger loans to get through college than their White peers. A National Center for Education Statistics study reveals that Black Bachelor’s degree graduates have 13 percent more student debt and Black Associate’s degree graduates have 26 percent more than White graduates with those degrees.

Research by the Federal Reserve and the Levy Economics Institute shows that debt cancellation would also boost the national economy. Freed up from these financial burdens, former debt holders would have more buying power to stimulate the economy — just when we need it most.

Where does President-Elect Biden stand? In March he tweeted support for a legislative proposal to cancel at least $10,000 in federal student loan debt per person, stating “young people and other student debt holders bore the brunt of the last crisis. It shouldn’t happen again.” But so far he has not committed to using executive action to avoid that historic repeat.

Rep. Ilhan Omar, who has championed proposals for universal student debt cancellation and free college, is among those pressing the Biden-Harris administration to take bold action. The mountain of student debt, she said at the CPCC event, “is the result of a two-tiered education system — one for the rich whose families can afford to pay tens of thousands of dollars for higher education and the other for poor and middle class families who have to pay off that education for the rest of their lives.”

The Biden administration will have the power to address these inequalities, Omar said. “As Americans, we are not suffering from scarcity, we are suffering from greed.”

Sarah Anderson directs the Global Economy Project and co-edits Inequality.org at the Institute for Policy Studies. Margot Rathke is an IPS Next Leader.