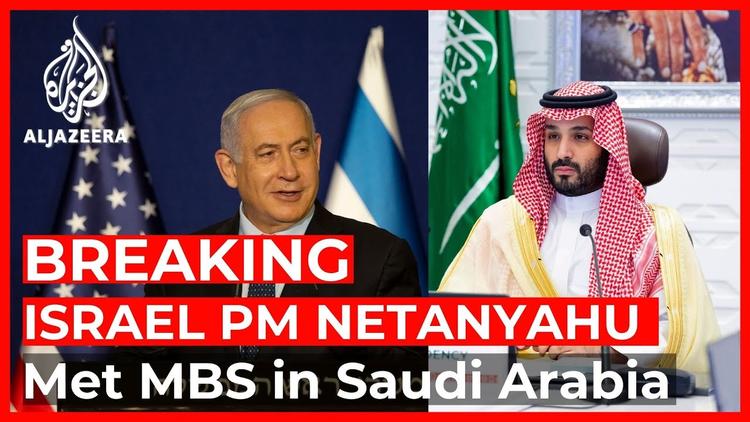 They are said to have had the use of a private plane owned by Israeli businessman Ehud “Udi” Angel, CEO of the Ofer Brothers Group, a close friend of Netanyahu’s. i24 says that a Saudi source confirmed the story. It says that the Hebrew news site Walla! reported that it was a five hour trip, and that Netanyahu met with Bin Salman.

An Israeli cabinet meeting on the government coronavirus response was postponed so that the meeting could take place.

Still, the report was denied by Saudi foreign minister Faisal Bin Farhan, though he only said that Netanyahu did not meet the crown prince.

Paul Goldman and Rachel Elbaum at NBC point out that the tracking site FlightRadar24.com showed a flight from Tel Aviv to Neom on Sunday.

The Israeli site i24 points out that the Wall Street Journal is reporting that two Saudi cabinet officials confirmed the meeting, which dealt with normalization and Iran, but said that no essential understandings were reached.

Netanyahu and Bin Salman have a lot to talk about. Both are frightened that president-elect Joe Biden will restore the 2015 Iran nuclear deal, which normalized Iran’s place in the world economy and lifted the sanctions that keep the country weak. Iran has 81 million people, while the Saudi citizens population is probably on the order of 21 million, and Israel is about 8.8 million. They are thus militarily at a disadvantage with regard to demography, but have been able to count on the US financial and trade blockade to keep Iran from having a robust economy and from being able to buy the latest generation of weapons. It is actually not clear that Iran has aggressive intentions. Its small presence in Iraq and Syria came at government invitation, and its military budget is tiny, somewhere around that of Norway or Singapore. Perhaps as part of the reflection fallacy, however, Tel Aviv and Riyadh see Iran as seeking regional hegemony.

As for Neom, Bin Salman envisages it as a high tech corridor, and he may be attempting to attract Israel companies to do business there. Saudi Arabia’s primary source of income, petroleum, is a stranded asset and the electrification of global transportation will rob it of most of its value. Bin Salman, for all his faults, knows that Saudi Arabia must transform itself into a manufacturing and services economy if it is to survive. A high tech sector could be a cash cow, and a fruitful avenue of cooperation with Israel.

King Salman, 84, opposes throwing the Palestinians under the bus, as his son is inclined to, and it may be that the relationship of Saudi Arabia and Israel will have to remain clandestine until Salman passes from the scene.

Palestinian sources told Al Jazeera that if the meeting took place, it was “heart-breaking.”

Al Jazeera reports that Saudi Arabia’s ambassador to the UN, Abdallah Y. al-Mouallimi, said Tuesday that normalization with Israel was possible, but only if it ended the Occupation of the Palestinian territories. The United States has for decades justified its close relationship to Israel despite the latter’s Apartheid policies on the ground that it was working toward a two-state solution (which certainly has not been true for the past two decades). Saudi Arabia may be poised to take up this American piece of misdirection.