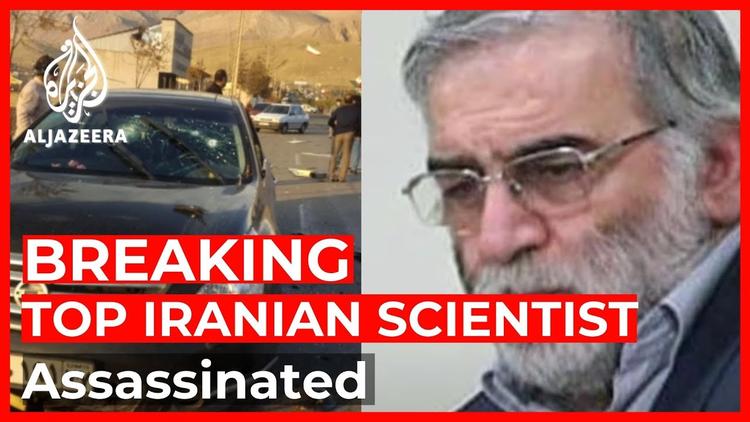 Ann Arbor (Informed Comment) – The Iranian newspaper Ettela’at reports that on Friday, what it called “armed terrorist elements” mounted an assault on the automobile carrying Dr. Mohsen Fakhrizadeh, who was badly wounded in the midst of the clash between his security team and the assailants and was transported to hospital, where he died of his injuries. Fakhrizadeh, an eminent nuclear scientist, was the head of the Research and Innovation Organization within the Iranian Ministry of Defense and Armed Forces Logistics.

Iran’s chief justice, Ayatollah Sayyed Ibrahim Ra’isi, characterized the attack as by “foreigners and international Zionism,” with, he said, “the sinister objective of forestalling the scientific progress of the country.”

The Iranian government believes that Israel’s Mossad carried out the assassination.

The speaker of the Iranian parliament, Mohammad Baqer Qalibaf, also blamed Israel, but included among the culprits “global arrogance,” the regime’s term for American imperialism in the Middle East.

Likely, the operation, whether by Israel or Saudi Arabia or both, was intended to spike tensions in US-Iranian relations so as to make it more difficult for Joe Biden to start back up the 2015 nuclear deal or Joint Comprehensive Plan of Action (JCPOA). Israel does not acknowledge its covert operations, but it seems the most likely culprit.

Trump withdrew from the JCPOA in May, 2018, and has strangled Iran with an unprecedented trade and financial embargo. Iran had given up 80% of its civilian nuclear enrichment program in 2015 in return for a lifting of international and US economic sanctions. Because Trump’s secretary of the treasury, Steven Mnuchin, has threatened third-party sanctions on firms and countries that deal with Iran the country has never received any sanctions relief from any quarter, despite its having completely abided by its obligations 2015-2018. In fact, the US moved from sanctions to blockade, preventing Iran from so much as selling its petroleum. Since 2018, in order to demonstrate its displeasure in having been taken for a ride, Iran has acted out by contravening some nuclear deal stipulations in a relatively minor ways.

In other words, the nuclear deal had an excellent prospect of forestalling Iran from ever moving to militarize its civilian nuclear enrichment program, but Trump’s destruction of it has had no success in stopping Iran from enriching uranium, in stockpiling it, and in establishing spheres of influence in Syria and Lebanon.

Trump and his cronies are afraid that Biden and his secretary of state, Antony Blinken, both of whom were deeply involved in the negotiations toward the nuclear deal, will revive it. Reviving the JCPOA could bring Iran into the world economy and lead it to be open to pressures from Europe and the US to change its behavior.

Israel and Saudi Arabia do not believe that Iran has no military nuclear ambitions, and they see it as a geopolitical enemy whom they would like the US to crush for them and keep weak, as the Bush administration broke the legs of Iraq, once one of the more formidable countries in the Middle East. That is, the likely alternative to a return to the 2015 nuclear deal is not the unstable status quo but eventually a US-Iran war that would be cheered on by Israel and Saudi Arabia.

Iran does not have a nuclear weapons program, and has not had one since about 2003. Back then, Fakhrizadeh was the head of it. After it mothballed its rudimentary military experiments once the existence of its nuclear enrichment program was revealed by spies of the People’s Jihadi (Mojahedin-e Khalq) Organization (the MKO or MEK), Iran kept to civilian enrichment. Uranium in nature is mostly inert U-238, but it is sprinkled with volatile U-235. If you enrich uranium 238 with more U-235 than is found in nature, you increase its volatility. If you enrich to 3.5% you make it into fuel that can run nuclear reactors. It gets hot and you can boil water with it that turns turbines. That’s all it is, an exotic way of boiling water. Iran has a reactor, and is building more, down at Bushehr.

You’d have to enrich the uranium to about 95% U-235 to make a bomb. Iran has never enriched beyond 19.5%, which is the level that is needed to run its small medical reactor, and is the cut-off for Low Enriched Uranium. There is no reason to think that Iran knows how to enrich to 95% for a bomb or has the various additional technologies that would be necessary to construct a bomb. Sometimes you see US journalists allege that Iran has “enough” enriched uranium to make “two bombs.” That is frankly ridiculous. You don’t make bombs by the amount of uranium you possess that is enriched to 3.5% or 4.5%. Without the necessary level of enrichment, you’d just have some rocks that could be used to heat water.

Iran accepted extensive and intrusive inspections by the International Atomic Energy Agency of its civilian nuclear enrichment program under the JCPOA from 2015 on. It was earlier under inspects as a signatory to the Nuclear Non-Proliferation Treaty. The IAEA has consistently certified that no Iranian nuclear material has ever been diverted (i.e. to possible military uses). No country actively under UN inspection has ever developed a nuclear weapon.

Fakhrizadeh was hardly the only high-powered Iranian nuclear scientist, and murdering him by terrorism likely has no implications for Iran’s ongoing enrichment.

My guess is that the regime will decline to take the bait by reacting in a dramatic way. As for reviving the nuclear deal, the Iranian foreign minister has said that if the US went back to observing the JCPOA and lifted the financial and trade blockade on Iran, Iran would go back to observing its obligations strictly.

That is what Trump, Israeli prime minister Binyamin Netanyahu and Saudi crown prince Mohammed Bin Salman are deathly afraid of.