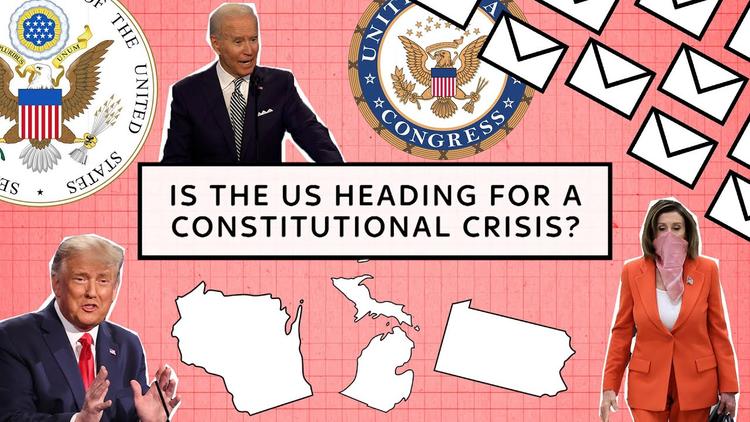 As I’ve Zoom-traveled the country speaking about legal issues involving the election, I have found myself, as well as audiences, bewildered and frustrated by one underlying question: Why is there so much legal uncertainty about so many critical questions concerning the rules for resolving a disputed presidential election?

If ever a need existed for clear legal rules established in advance, before we know whose ox will be (Al) Gored, that situation is it.

Let me provide just one critical example. The Constitution does not create rules or an institutional structure for resolving a modern, disputed presidential election. It provides a fail-safe mechanism for only one situation, which has not happened since 1824: If no candidate gets the necessary majority of votes in the Electoral College, then the House picks the president from the top three Electoral College candidates.

But that’s not the path the most disputed presidential elections have taken since 1824. Nor is it the likely path if this year brings us to that dark place.

And the way the country’s legal system is structured, we can’t get clear answers in advance to some critical legal questions, unless things actually get complicated enough to bring the courts into the picture.

The threat of a contested election

When the U.S. confronted the most intensely disputed presidential election in our history, the post-Civil War 1876 election, the country and Congress discovered we had no rules or institutional structure in place for addressing the form of conflict which that election raised.

Here’s what happened: Four states sent two or more competing slates of electors to the Electoral College, each claiming to represent the valid vote of their states. When Congress performed its constitutionally assigned power to count these votes, that meant Congress had to determine which slate to treat as valid. The issue was which candidate had won a majority of these electoral votes, not that no candidate had failed to garner a majority.

Congress decided on the spot to create an ad hoc, 15-member commission, with five Supreme Court justices, and agreed to be bound by its judgment unless both chambers, controlled by different parties, rejected it. Four months later, a compromise resulted in the election of Republican Rutherford B. Hayes, not the winner of the popular vote, Democrat Samuel Tilden.

In the wake of this barely averted disaster, Congress realized the country needed something better than an ad hoc arrangement. Resolving a disputed election for chief executive is one of the potentially most explosive situations any democracy can face; democracies have come apart in these situations.

After a decade of deliberations, Congress bequeathed the Electoral Count Act in 1887, designed to provide the framework, which still governs today, for how Congress should deal with a state that certifies two or more slates of electors.

Yet for all that deliberation – or maybe because of it – the Electoral Count Act is still riddled with major legal uncertainties. So are other federal statutes that govern the election.

But the law then says that if a state “has failed to make a choice,” the legislature can step in and decide how the state’s electors should be appointed – which includes the legislature appointing electors itself. But it’s not clear what “failed” means. And the law doesn’t provide any definition.

The question of when an election has “failed” thus takes on paramount importance. A natural disaster that completely prevents a state from conducting its presidential election would be the classic example.

But what if – more relevant this year, perhaps – a state cannot quickly enough to determine who has won the vote? That means reaching a final resolution, including any litigation that could affect the outcome, by the time the Electoral College must vote on Dec. 18. Can a legislature assert the election has “failed,” step in and directly appoint the electors itself? Yet the act contains no definition or examples of a “failed” election.

That is a rather large question to leave up in the air.

Send in the judges?

If the courts had given a definitive interpretation of what it means for an election to have “failed,” there would be a settled meaning of this term and other unresolved ones, in this law and others, in advance of the election.

The Supreme Court has also never interpreted the Electoral Count Act. Nor will there be any ruling on what a “failed” election means before the moment when Americans actually face potentially explosive political conflicts over exactly that issue.

The reason is that our federal courts, unlike those in some states and other constitutional democracies, will not address any legal issue unless it arises in the middle of what’s termed an actual “case or controversy.” Though this principle rests on a thin historical foundation, it is as deeply embedded in American legal doctrine as any principle.

In legal terms, the federal courts will not issue advisory opinions. That means federal courts will refuse to answer any question in the abstract about the legal meaning of a statute, including whether the statute is even constitutional, no matter how important it might be to have clear guidance on what those laws mean.

This principle is conventionally described as a way of limiting the role of federal courts in American democracy. Courts will resolve disputes over the meaning of law only when they absolutely must enter the fray. The “case or controversy” constraint is also linked to proper respect for the separation of powers.

No shelter in the storm

But as this election and many other contexts illustrate, this doctrine can also be dangerous for the country, as well as the courts themselves. The last time Americans want to discover the proper meaning of laws like the Electoral Count or Presidential Election Day acts is precisely in the midst of an actual controversy over who will become president.

At that moment, the courts are no longer operating behind a veil of ignorance, which would mean they were blind to any knowledge of who would benefit. They will be aware of which candidate is more likely to benefit from a ruling one way or the other.

Worse than that, even if the courts decide that question in exactly the same way they would behind that veil, the half of the country whose candidate loses will almost certainly perceive the courts as having acted for the purpose of favoring that candidate. That is almost inevitable, as I said at the time of Bush v. Gore.

One major purpose of a well-constructed legal regime is to provide a clear framework in advance for resolving contentious issues. Being in conflict about the very content of those rules, at the same time we are trying to apply them to resolve those issues, is sure to make these conflicts all the more divisive.

The country does not want to be debating how long the term of office for a president ought to be at the same time it is choosing a president, which is why the Constitution specifies the four-year term.

But to settle the meaning of many rules on the books, judicial interpretation is required. Yet that is exactly what the “case or controversy” requirement precludes – until we are in the midst of that controversy.

This is why audiences I talk to are frustrated at discovering that legal experts offer conflicting views, or give “on the one hand, on the other hand” answers to questions about exactly how a disputed election might arise and be resolved. In the name of limiting their own power, the federal courts leave us at sea until the boat is nearly capsizing.

Sky News: “What happens if the US election result is contested?”