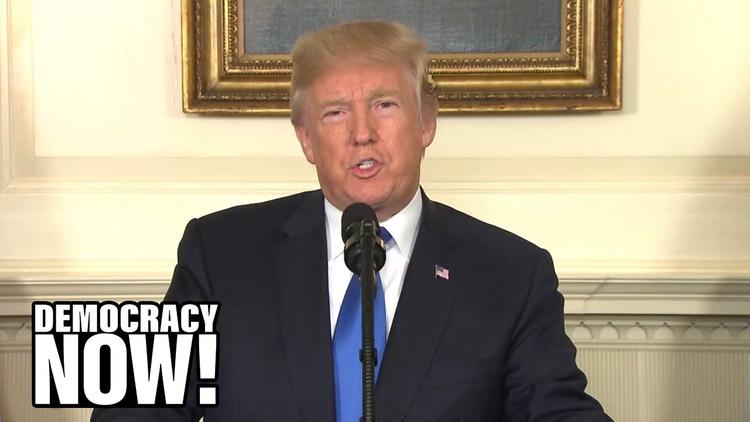 Donald Trump asked his senior advisers to examine options for air strikes against Iran’s main nuclear installation, the New York Times reported recently. According to the report, the meeting occurred the day after inspectors reported a significant increase in the country’s stockpile of nuclear material. Key advisers reportedly counselled against this course of action, warning of the possibility of rapid escalation into a regional conflict.

This situation is of the Trump administration’s making. The Iran nuclear deal (formally the Joint Comprehensive Action Plan) was the result of extensive negotiations, as Iran’s violations of its commitments under the Nuclear Nonproliferation Treaty had become apparent. Iran’s nuclear enrichment activities were severely restricted for ten years, and it gave up its entire stockpile of medium-enriched uranium as well 98% of its stockpile of low-enriched uranium.

On May 8 2018, the Trump Administration announced its withdrawal from the JCPOA and imposed sanctions. As Iran was and for some time remained in compliance with the nuclear deal, there was nothing to achieve with sanctions directed at the ballistic missile programme and Iran’s military actions and subversion abroad. Iran kept to its restrictions until July 2019, but after the killing of General Qassem Soleimani by the Trump administration in January 2020, the country announced its rejection of all limitations on its nuclear programme.

However, this doesn’t mean that Iran will build a nuclear weapon. It remains committed to being a non-nuclear state under the non-proliferation treaty, and going nuclear has all kinds of repercussions, including the loss of any technology cooperation with Russia, any access to the international uranium market and making Iran an explicit target for US and Israeli nuclear capabilities.

Other states might react by also going nuclear, and if Saudi Arabia decides it cannot rely on the protection of the United States, it could develop its own weapons which would set off a spiral of nuclear proliferation. For all of these reasons, Iran is likely to remain in the NPT.

No to military intervention

The risks of military action against Iran are high, as Trump’s advisers pointed out to him. There is no basis in international law to use military force against a country just because it has a nuclear programme. There is no prospect that the UN Security Council would approve military action against Iran. And for the United States to engage in yet another military intervention that is likely to be widely interpreted to defy international law will have wide-ranging consequences for the position of the US and the international system as a whole.

If Iran chooses to leave the NPT, there would be no legal instruments available to censure Iran and there would be no international support for the use of force. Trump is not the first US president to explore the use of military action against Iran’s nuclear programme, but the military leadership has always been clear that airpower alone is unlikely achieve the objective. It may well be that the main purpose of Trump’s idea for a military attack is to prevent a Biden administration from reactivating the nuclear deal.

While air strikes on Iranian nuclear facilities may delay the acquisition of nuclear weapons by Iran, they will not prevent it. Iran’s nuclear programme cannot be stopped if Tehran is determined to go nuclear, short of a major invasion and regime change. Not only would such an action be disproportionate, but the United States government under any administration will lack the political capital for such an undertaking.

By describing a nuclear-armed Iran as an absolute threat that cannot be tolerated, the political elite in the US is digging a dangerous trap for itself, given that it lacks the instruments to deal with this threat effectively. The underlying cause of the strategic conflict between the United States and Iran is the nature of the regime, the oppression of its citizens and its aggressive foreign policy (involving the use of terrorism). In other words, it is about domestic governance and the illicit use of force to further political objectives.

While the US is justified in maintaining robust power projection capabilities, the strategic objective of US policy must be to induce Iran to act within the rule of law both domestically and in its foreign policy, which entails abandoning the use of military threats and terrorism as tools of diplomacy.

The strategic conflict with Iran is a long and complex game that requires patience and determination. The nuclear issue is only one and by no means the most significant element. But Washington needs to rely on the tools of soft power unless there is really no other choice.