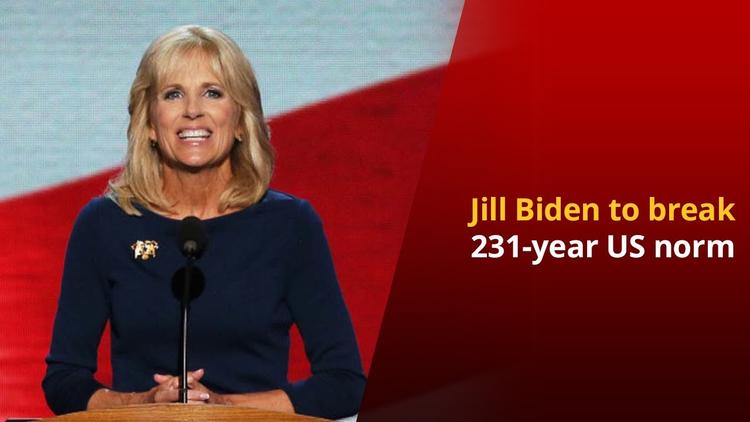 Ann Arbor (Informed Comment) – Essayist and writer Joseph Epstein took a shot at incoming First Lady Jill Biden at the Wall Street Journal on Saturday. In his op ed, the former editor of The American Scholar urged her to stop having herself referred to as “Dr. Jill Biden” on the grounds, he said, that she is not a medical doctor, that her doctorate is in education, and that doctorates are not worth much any more because diluted. He referred to her as “kiddo.”

Epstein said you shouldn’t refer to yourself as “Dr.” unless you have delivered a baby, displaying shocking ignorance both of the history of the English language and of who delivers babies.

The Oxford English Dictionary informs us that the word “doctor” is from the Latin “docere,” to teach. The word emerges in English around 1300 with the sense of a theologian, a doctor of divinity, who was licensed to teach his subject by a university. It is from the Old French doctour.

In 1387, John Trevisa (fl. 1342 – 1402) in his translation of the Polychronicon of Ranulf Higden from the Latin, said, “Seynt Austyn þe firste doctour of Englischemen.” Saint Austin or more properly St. Augustine of Canterbury (d. 604) had been a Benedictine monk sent by Pope Gregory the Great to bring the English to Christ. So Trevisa is using the term here as in the phrase “doctor of the church.”

And here is another sense of the term:

“One who, by reason of his skill in any branch of knowledge, is competent to teach it, or whose attainments entitle him to express an authoritative opinion; an eminently learned man. archaic.”

Around 1391, Chaucer in his Treatise on the Astrolabe, said it was “An introductorie aftur the statutz of owre doctours.” That is, by these doctors he meant astronomers.

In 1400, the Morte D’Arthur (Death of King Arthur) spoke of “Dukes and duspers and doctours noble.”

In 1510 Thomas More used the phrase in a translation about the life of Renaissance philosopher Giovanni Pico della Mirandola, “He scrupulously sought out all the famous doctours of his tyme.”

Philosophers and humanists with the highest university degrees were also called doctors. In 1665 a piece in Philosophical Transactions referred to “One of the most zealous Doctors of the contrary Opinion.”

It was not until the late 1500s that the term “doctor” began being with any regularity to physicians, who had until that time been called “leech.”

So historically speaking, educators like Dr. Jill Biden had first dibs on the title “doctor.” The medical doctors saved my life, and I love them, but they got the title second hand.

It isn’t, of course, that Epstein is just wrong about the history of usage. (Or rather, he is being a contrarian, since he surely knows that history and chose to disregard it).

It is that he is being sexist. I don’t remember reading an op-ed by Epstein catigating Henry Kissinger for being called Dr. Henry Kissinger. I did a search at Proquest for that string in newspapers over the past few decades and got nearly 2,000 hits.

Helen Magill White was the first woman in the United States to earn a doctorate, in 1877, at Boston University, in Greek. Her dissertation, “Greek Tragedy,” had been thought lost but was rediscovered in 2018.

Women with Ph.D.s remained rare until fairly recently, and maybe Epstein, born in 1937, still can’t get used to the idea. Princeton did not award a woman a doctorate until 1964, when Dr. T’sai-ying Cheng received one in biochemical sciences.

Older faculty members tell me that the University of Michigan had to bring in carpenters to install women’s bathrooms in Haven Hall, the home of the History and Political Science Departments, in 1972. In that year, nationally, only about 13% of Ph.D.s were earned by women. Today I think they earn slightly more of them than do the men.

Nor is it the case that Ph.D.s are worth less just because a lot of people (even women) now earn them. About 2 percent of Americans have a doctoral degree, or some 6.4 million people. Learning is not diluted by numbers but rather is enabled by them. More scientists make more inventions, and generate more new ideas that allow innovation. Knowledge is not a zero sum game.

I actually am sympathetic to what I take to be Epstein’s discomfort with social hierarchies. I wish TV journalists would stop calling people by the highest office they’ve held and just say Mr. and Ms. But I don’t think a title that recognizes a personal achievement is objectionable. It is a weird kind of American anti-intellectualism that doesn’t want to recognize when someone has hard-won expertise in a subject, so that your personal opinion might not be as good as theirs. I don’t understand quantum mechanics and I’m glad to call people who have higher degrees in it anything they want me to. The really tone deaf thing in Epstein’s essay, however, is that he could not see that he was taking away something from an accomplished woman that no one would try to take away from a man.