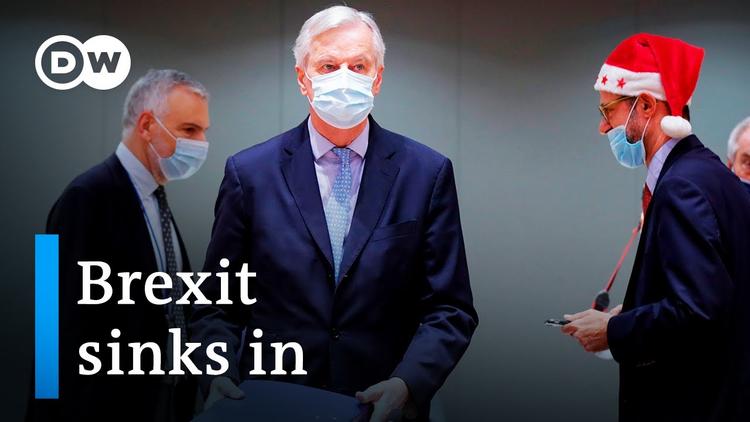 To misquote Shakespeare, our Brexit negotiating revels now are ended. The tempestuous talks did not lead to a dramatic walkout, even if at times the UK government gave the impression this was a feud worthy of the Montagues against the Capulets. The negotiators ignored the background noise and succeeded in drafting a dense legal document on which the future of UK-EU relations now hangs.

How the deal came together

The UK was adamant throughout the negotiations that it be treated as a sovereign equal of the EU and have its independence respected. This was particularly important when it came to fishing rights – one of the last issues to be resolved.

There were always two problems with this argument. Firstly, as explained by the Spanish foreign minister – a veteran trade negotiator – a trade agreement is designed to establish interdependence rather than being an exercise in asserting independence.

Secondly, the EU is simply a bigger beast economically speaking than the UK. This meant Brussels was confident it could weather the disruption of a no-deal separation better than the UK. By refusing to extend the transition period despite the pandemic, prime minister Boris Johnson ensured both parties faced the same time pressure. But they did not face the same level of risk if no agreement was reached. Hence the real ringmaster of the Brexit deal was Father Time, not Johnson or Angela Merkel, as UK newspapers often reported.

Nevertheless, it looks like the UK government will claim victory by arguing that it is now able to escape the jurisdiction of the European Court of Justice while getting tariff and quota-free access for goods exported to the EU. In a statement immediately following the announcement of the deal, the UK government did just that:

The deal … guarantees that we are no longer in the lunar pull of the EU, we are not bound by EU rules, there is no role for the European Court of Justice and all of our key red lines about returning sovereignty have been achieved. It means that we will have full political and economic independence on 1st January 2021.

The reality though – as with everything Brexit-related since 2016 – is far more complex.

Johnson’s negotiator David Frost liked to argue that the UK just wanted a standard free-trade deal like that between Canada and the EU. In reality, the UK was asking for extras, such as mutual recognition of conformity assessment for goods and mutual recognition of professional qualifications. The EU does not appear to have budged on those.

Brussels was also adamant that the deal required legal guarantees to prevent the UK undercutting the single market by using its new regulatory autonomy to lower environmental standards or employment rights. Johnson agreed in principle to this level playing field idea in the political declaration that accompanied the 2019 withdrawal agreement he got through parliament. Then, later in negotiations, he tried to renege on this pledge. In the end he u-turned again. The deal states that divergence from EU standards would lead to potentially restricted access to the single market.

In a press conference on the deal, Johnson reassured “fish fanatics” there would be plenty for their dinner plates, but the deal means that for the next five and a half years EU-based vessels will continue to enjoy significant access to British waters, during the transition to a final arrangement.

It’s clear that free movement of people has ended, while goods will face customs and regulatory checks. Transport chaos around the port at Dover is therefore still a distinct possibility after January 1 if exporters fail to have the proper paperwork to cross the Channel. Given they have not done this in a generation, there are bound to be difficulties. EU-based hauliers might also opt for caution and in the short–term avoid the risk of getting their lorries stuck in the UK. The UK will also leave the Erasmus higher education exchange programme, which will come as a blow to many students – although the UK now plans to launch its own “Turing” scheme to offer placements at universities around the world.

Much less clear is the future of the UK’s key export industry: financial services. Outside the single market, the City of London relies on the EU to grant permission to service EU-based clients and sell them banking, accounting, and associated legal products. This “equivalence” arrangement is reviewed on an ongoing basis, depending on the UK approach to financial regulation and data protection. That puts the sector on a much less firm footing than, say, manufacturing.

The dance is over but now comes the hard sell. Credit claiming and blame avoidance will be the twin priorities for the UK government. Johnson is bound to play up the sovereignty angle by highlighting the ability to avoid the intrusion of EU law.

The blame game is where things are likely to get more interesting. This is because the deal requires a constant dialogue with the EU over things that can affect the terms of the agreement, such as government subsidies. This is the position Switzerland constantly finds itself in. The Brexit deal requires both sides to submit to a general review after four years to make sure both sides are meeting the requirements. Hard eurosceptic Conservative backbenchers, who pushed for a no deal, may see this as a concession too far.

What can Boris Johnson do to overcome internal opposition? His parliamentary majority is sufficient to overcome anything short of a major revolt. But his strongest card might be to simply shift the blame to his predecessor, Theresa May, for triggering Brexit without a plan. Meanwhile, Scotland’s first minister Nicola Sturgeon tweeted immediately after the deal was announced that “no deal that will ever make up for what Brexit takes away from us. It’s time to chart our own future as an independent, European nation.” So, while one episode in this long drama may be drawing to a close, it seems that others, relating to the very future of the UK, are far from over.