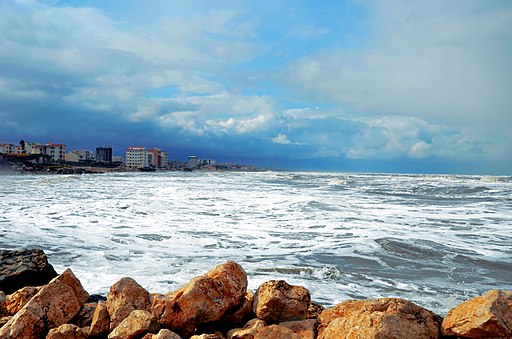 By Frank Wesselingh and Matteo Lattuada | –

Imagine you are on the coast, looking out to sea. In front of you lies 100 metres of barren sand that looks like a beach at low tide with gentle waves beyond. And yet there are no tides.

This is what we found when we visited the small harbour of Liman, on the Caspian Sea coast of Azerbaijan. The Caspian is actually a lake, the largest in the world, and it is experiencing a devastating decline in its water level that is about to accelerate. By the end of the century the Caspian Sea will be nine metres to 18 metres lower. That’s a depth considerably taller than most houses.

It means the lake will lose at least 25% of its former size, uncovering 93,000 sq km of dry land. If that new land were a country, it would be the size of Portugal.

Embed from Getty Images
ATYRAU, KAZAKHSTAN: An Aerial View of salt deposits on the shores where the Ural River meets the Caspian Sea near the historical fishing town of Atyrau, which is now the center of the oil industry in the Ural-Embensky region, on September 1997 in Atyrau, Kazakhstan. In the lower right corner, black petro-chemical pollution trapped by dirt barriers can be seen seeping into the salt flats. (Photo by Reza/Getty Images).

As we found in our new research, the crisis may well result in an ecocide as devastating as the one in the Aral Sea, a few hundred kilometres to the east. The Caspian’s surface is already dropping by 7cm every year, a trend likely to increase. In five years it might be about 40cm lower than today and in ten years almost one metre lower. Maritime countries worldwide are coming to terms with one metre or so of sea level rise by the end of the century. The Caspian Sea faces a drop of that size – except it will happen within a decade.

Climate change is the culprit. The Caspian Sea waters are isolated, its surface is already around 28 metres below global oceans. Its level is the product of how much water is flowing in from rivers, mostly the mighty Volga to the north, how much it rains, and how much evaporates away.

At the end of the century the Volga and other northern rivers will still be there. However, a projected temperature rise of about 3℃ to 4℃ in the region will drive evaporation through the roof.

Future misery despite past crises

The Caspian Sea has a history of violent rises and falls. In Derbent, on the Caucasus coast of Russia, submerged ancient city walls testify to how low the sea was in medieval times. Around 10,000 years ago the Caspian was about 100 metres lower. A few thousand years before that it was about 50 metres higher than today and even overspilled into the Black Sea.

Yet people who lived beside the sea were able to overcome the swings. No human infrastructure was around to be destroyed and many animal species simply moved up and down with the sea levels, as they had done over the past 2 million years or so. But this time is different. The fall will affect the Caspian’s unique and already stressed animal and plant life, along with human societies along the coasts.

In some areas the coastline is about to retract hundreds of metres a year or more. Can you imagine building new piers and harbours that fast? By the time they are ready, the sea will have moved kilometres or tens of kilometres further away. Coastal promenades will soon be landlocked. The beaches of today will be the sand ridges stranded in barren plains of tomorrow.

The drop will also affect lowland rivers and deltas around the Caspian Sea. Once-fertile plains will become too dry for watermelon and rice farming to continue.

The town of Ramsar, on the Iranian coast, gave its name to a global wetland convention. But as the sea recedes, the town is becoming landlocked and the surrounding wetlands will be gone within decades.

The shallower “shelves” of the northern and eastern Caspian are major food supplies for fish and birds, yet the entire northern and eastern shelves will transform in dry barren lands. This will devastate fish species, the Caspian seal and a richness of molluscs and crustaceans species unique to the sea. These Caspian inhabitants have already suffered badly in the past century from pollution, poaching and invasive species. About 99% of Caspian seal pups are raised on the winter ice of the north Caspian. Yet both the winter ice and indeed the whole north Caspian will disappear.

Remaining biodiversity hotspots in depths between 50 metres and 150 metres will be affected as rivers dump nutrients into the deeper central basins combined with rising temperatures. This will decrease oxygen levels and developing ecological dead zones could affect the remaining refuges of Caspian species. A genuine ecocide is around the corner.

The situation cries for action, but possibilities are limited. Rising global CO₂ levels, the main driver of climate conditions causing the Caspian crisis, can only be dealt with global agreements. In Soviet times, large scale water diversions from Siberian rivers were proposed to deal with the shrinking Aral Sea to the east. But such large works – in the case of the Caspian Sea, a canal from the Black Sea might be considered – come with huge ecological and geopolitical risks.

Yet action is necessary to safeguard the Caspian Sea’s unique plants and animals and the livelihood of the people who live around it. The stranded small harbour in Liman is further from the sea every year. If no action is taken, it will be left alone in more than one way.