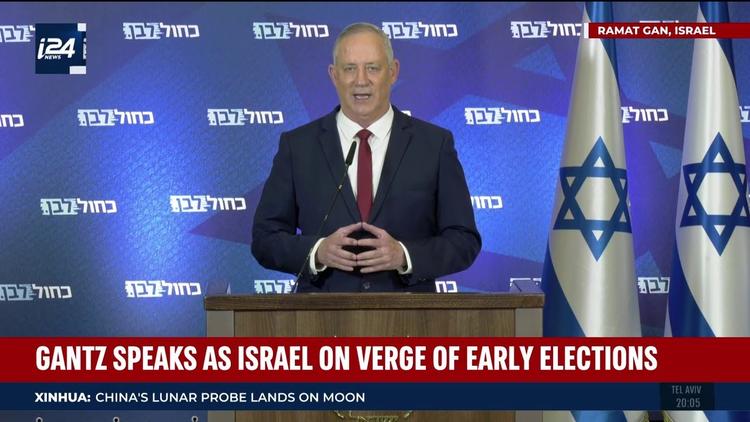 Ann Arbor (Informed Comment) – Mahmoud Mujadalah at the Israeli newspaper Arab48 reports that Benny Gantz, the Israeli minister of defense who was set to rotate in as prime minister after Binyamin Netanyahu next year this time, made a potentially game-changing announcement Tuesday.

He said that his party list, the Blue and White, will vote in favor of dissolving parliament when the proposal is tabled on Wednesday by the opposition party coalition Yesh Atid-Telem. If it succeeds, it could ultimately lead to Israel’s fourth election in the space of two years. The immediate issue is that Netanyahu has not presented and passed a budget. In the deal for the national unity government, the budget was supposed to have been completed in August.

Al Jazeera reports that Gantz has concluded that Netanyahu does not intend to honor his agreement to let the alternate prime minister take office as planned in December, 2021. This is why he hasn’t passed a budget, which would lock him in to stepping down. Instead, he likely wants to go to new elections in a few months, after the coronavirus has begun passing because of the availability of a vaccine and the economy improves.

Gantz instead has decided to seek snap elections because Netanyahu is currently unpopular, rather as Trump is, because of mishandling the coronavirus pandemic and because of the consequent bad economy. Sometimes large demonstrations have been mounted against him regularly for months. Polls show that in a new election, the Likud might still come out the largest single party, but its number of seats would likely shrink, increasing the possibility that Gantz could form a Blue and White government with the help of other small parties.

According to Mujadalah: In his speech, Gantz launched a sharp attack on Netanyahu, his partner in the current national unity government, saying that “he only acts in an attempt to elude being convicted.” Netanyahu is on trial for corruption, and Gantz accused him of stalling judicial and ministry of justice appointments in hopes of avoiding being convicted.

Gantz said it was Netanyahu who “decided to dismantle the government and who dragged us into new elections.”

He added that “Netanyahu transformed the efforts to confront the coronavirus into a personal campaign to glorify his own name and polish his image” and was guilty of “a serial breaking of all agreements.”

Gantz proclaimed that Netanyahu “did not fool me, but fooled you, the citizens of Israel.”

The minister of defense complained that “millions of citizens are in a sad condition, businesses are closing their doors, and more and more citizens are in distress and poverty — while Netanyahu veils from the government its own budget. For that reason, Blue and White will vote tomorrow in favor of dissolving the Knesset.”

Addressing Netanyahu, Gantz said, “The burden of proof falls on your shoulders. Arise immediately to present the budget for the government, and take an interest in passing it and approving it and guaranteeing unity.”

Netanyahu pleaded with Gantz to maintain the unity government.

The leader of the oppositionist Yesh Atid- Telem coalition, Yair Lapid, applauded Gantz’s move. “I call on Benny Gantz to complete what we began and to expel Netanyahu from Balfour [the avenue on which the prime minister’s residence is located]. We have the possibility to enter parliament tomorrow and to vote to dissolve the Knesset and begin a new path that will remove Netanyahu from Balfour.”

Amir Peretz, leader of the small center-left Labor Party, concurred, pledging his party to vote for the dissolution of parliament, as well.