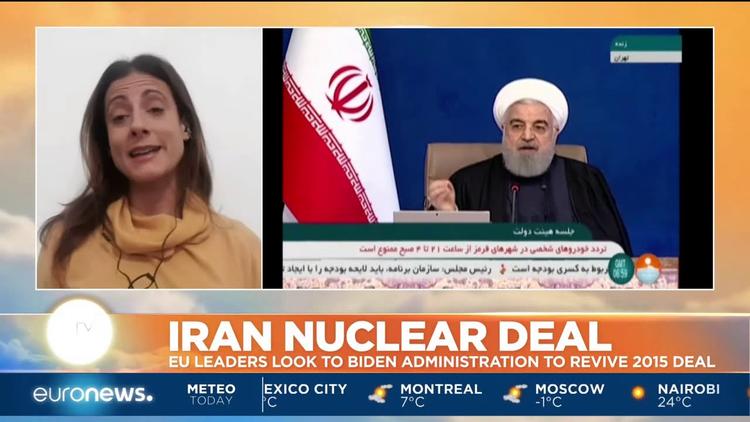 Ann Arbor (Informed Comment) – The NYT’s Thomas Friedman reports on a recent telephone conversation he had with Joe Biden, and the interview contains good news.

Biden made it clear that he will attempt to re-institute the 2015 Joint Comprehensive Plan of Action (JCPOA) or Iran nuclear deal, admitting, “It’s going to be hard, but yeah.”

It just got harder. The Iranian parliament passed a resolution on Wednesday threatening to kick out UN inspectors and to enrich uranium to 19.5% by February if the financial and trade embargo on Iran (put in place by the outgoing Trump administration) is not lifted by then. The Trump administration has reduced Iran’s oil exports from 2.5 million barrels a day of petroleum to less than 300,000 barrels a day, that is, by 88%. Petroleum had accounted for a large percentage of Iran’s economy, so this is severe economic warfare..

This resolution came in response to the (likely) Israeli assassination of prominent Iranian nuclear scientist Mohsen Fakhrizadeh last week. It is possible that the hit was also behind the scenes supported by the Trump administration, which hopes to sabotage any hope of a Biden reinvigoration fo the Iran nuclear deal.

The JCPOA had promised Iran an end to UN Security Council and US sanctions if it mothballed 80% of its civilian nuclear enrichment program and took steps to close off all avenues to ever militarizing the program. Among the provisions are that Iran would not enrich above 3.5%, which is what is needed for fuel for its nuclear reactor in Bushehr, and that Iran would accept regular and even snap UN inspections of its civilian facilities to make sure that the enrichment levels were not exceeded and that no material was diverted to military purposes.

Iran did as it was asked and UN inspectors confirmed its complete compliance 2015-2018, and is still largely observing the JCPOA, though it has acted out in minor ways. However, it gave all that up for less than nothing, since in May, 2018, Trump breached the treaty and slapped the most severe trade and financial restrictions on Iran ever put imposed by one country on another in peace time, making it impossible for it to sell its petroleum or conduct ordinary international banking transactions. (Even at the height of his own severe sanctions in 2012-2014, President Obama had never gone that far).

For Iran now to kick out the inspectors and enriching to the upper limit of low enriched uranium would be major breeches of the treaty, which has limped along largely intact so far.

The hard line Iranian press, however, notes that the country’s reformists are extremely upset by this proposal of parliament, presumably because they think the new Biden administration will lift sanctions if Iran does nothing provocative. Kayhan sniffs that you would think it would be the Americans who would be upset, not Iranians who were played for fools by the JCPOA.

Other Iranian commentators note that the parliament isn’t really in charge of decisions about the direction of the Iranian civilian nuclear enrichment program, which is in the hands of the executive, i.e. President Hasan Rouhani and the clerical “August Leader,” Ayatollah Ali Khamenei.

As Friedman notes, Biden for his part has said that the US would rejoin the JCPOA if Iran returns to compliance with its terms. Iran was limited to enriching to only 3.5% but has gone up to 4.5%, and was limited to only 6,000 centrifuges of a basic sort, but now is running more than than and putting into service some sophisticated ones.

The Rouhani government, which is in power for half a year before the June, 2021 elections, has signaled that it would gladly come back into compliance if the US removed sanctions. Iranian foreign minister Javad Zarif has said that restoration of the treaty, if the US lifts Trump’s financial and trade embargo, would not even require any negotiations and would be “automatic.”

Biden is smart enough to reject calls by the Right (and also by Friedman himself) to use the current blockade to wring from Iran a pull-back from Syria, Lebanon and Iraq and to pile on other demands of a political sort.

Biden realizes that the number one issue is Iran’s nuclear capability, which is now civilian, and which Biden want to keep that way. He wants some minor adjustments to the JCPOA, but his main goal is restoring it.

“Look, there’s a lot of talk about precision missiles and all range of other things that are destabilizing the region,” Biden said. But the fact is, “the best way to achieve getting some stability in the region” is to deal “with the nuclear program.”

“Then, Biden said, “in consultation with our allies and partners, we’re going to engage in negotiations and follow-on agreements to tighten and lengthen Iran’s nuclear constraints, as well as address the missile program.” The U.S. always has the option to snap back sanctions if need be, and Iran knows that, he added.”

Here I think President-Elect Biden expressed himself poorly. The snap-back provisions of the 2015 Iran nuclear deal allow the signatories on the UN Security Council to call for a reimposition of sanctions if Iran does not comply with the terms of the treaty.

The JCPOA does not provide for snapback sanctions just because the US does not like the Iranian presence in Syria. Nor is there any evidence at all that even the most massive sanctions the US could place on Iran would cause Tehran to pull out of Syria. From Iran’s point of view, it is propping up a friendly government, that of Bashar al-Assad, and preventing it from falling to US-backed radical Sunni extremists, and this is an existential issue for Iran.

The US will certainly want to negotiate with Iran about its geopolitical role in the Middle East, and perhaps there are sticks and carrots Washington can deploy to that end. But Biden should stick to his first instinct, and carefully separate out restoration of the nuclear deal from those other issues. JCPOA snapback is not relevant to them.

If Biden can resurrect the JCPOA and bring Iran into the international community with regard to trade and investment, that will be a much more powerful impetus for Tehran to avoid policies that anger its new trading partners than the threat of the reimposition of unilateral sanctions could ever be.