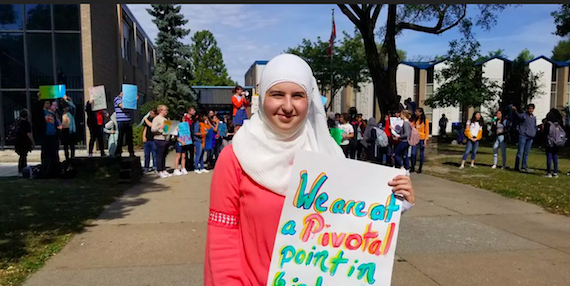 Weeks prior to the lockdowns and closures that came with the COVID-19 pandemic, UN Secretary General António Guterres said 2020 would be a “pivotal year for how we address climate change.”

Revamped emission goals were expected from 196 countries, but with international meetings postponed due to the pandemic, the stark reality is that 2020 is one of the hottest years recorded.

Widespread action based on a deep connection between people and the Earth may be the space of hope. In researching what motivates Muslim women to connect with the Earth and lead environmental activism, I’ve discovered courage and deep conviction to be driving forces.

Young Muslim women are transcending boundaries to create spaces of activism. Their efforts are acts of worship that integrate social and political realities.

Historically, Muslim scholars coupled their study of nature to their understanding of Allah (God). The Qur’an articulates how eco-consciousness permeates every aspect of life and explains nature as a complete, complex, interconnected and interdependent system. It highlights the importance of recognizing and preserving the mizan, or balance.

Verily, We have created everything in equal proportion and measure … (Qur’an, 54:49).

The natural world manifests many of Allah’s attributes, including beauty, patience and mercy. Reflecting and connecting with the Earth fosters deeper understanding of Allah and the truth. Honouring and protecting the Earth becomes an act of worship.

We did not create the heavens and the Earth, and what lies between them except with Truth … (Qur’an, 15:85).

Several Qur’anic chapters such as the “Bee,” “Fig” and “Sun” make the conversation between nature and scripture explicit. The Qur’an explains the Earth as a sacred responsibility entrusted by Allah on humans.

Every being exists within an interactive community, glorifying Allah. Destruction or loss of any entity is tragic and cruel, but also an offence against Allah’s creation.

All living beings roaming the Earth and winged birds soaring in the sky are communities like yourselves … (Qur’an, 6:38).

I have collected narratives from nearly 60 Muslim women around the world for my research. Here are a few:

Kadiatou Balde and Zainab Koli founded Faithfully Sustainable, which blends faith and environmental sustainability through education, activism and entrepreneurship. Faithfully Sustainable engages with an online community of more than 2,500 members through social media posts, talks and fellowships. Across spaces of minority narratives, they encourage members to understand and adopt sustainable practices.

Ndieguene discovered that laterite, a reddish, clay-like material and local natural resource, was historically used as a building material. She successfully incorporated laterite in her work, reintroducing Indigenous knowledge and methods. Ndieguene says the mention of trees in the Qur’an taught her about patience and being grounded in her identity and principles.

Have you not seen how Allah sets forth a parable? A good word like a good tree, whose root is firm and its branches reach the sky … (Qur’an, 14:24).

Mishka Banuri is the 20-year-old co-founder of Utah Youth Environmental Solutions (UYES). UYES empowers youth to hold government officials accountable in combating the climate crisis. In 2018, she led efforts to pass a resolution in the Utah legislature to recognize the validity and existential threat of climate change.

Recognizing her own intersectionality as a Muslim Pakistani American, Banuri says, “liberation is synonymous with autonomy: having the ability to choose how to use our bodies and minds, to be able to breathe clean air and to drink clean water.” Banuri explains how Qur’anic stories illustrate the connections between all of humanity and the natural world, “… when we pollute the Earth, we are essentially polluting ourselves.”

Alirifai balances her activism through spaces of opposing states of privilege between Canada and Syria. Syria is locked in a war, suffering from shortage in food, water and basic necessities, further exacerbated by climate change. For Alirifai, the Prophetic narration “removing a harmful object from the road is a charity,” is connected to her action on climate change. “There’s a really huge thing in the way and I need to work to remove this extremely harmful thing!” she said.

From an Islamic perspective, environmental activism is grounded in honouring the relationship between oneself, Allah and Allah’s creation. In my research, an overwhelming majority of women expressed how they draw inspiration from the Prophetic narration:

If the Final Hour comes while you have a seedling in your hands, then let them plant it.

Themes emerging from this include: finding hope amidst crisis, acting with calm consistency, working to benefit future generations, individual responsibility and recognizing one’s place and deep interconnection with the Earth.

During the 2019 Bioneers Conference, Banuri, who delivered a keynote talk, reflected on growing up in an Islamophobic climate in the U.S. “Muslims, like so many other people, have to constantly prove our humanity so that our sacred spaces are not vandalized, so that we can get jobs, and so that we can stay alive,” she said.

Despite such challenges, young Muslim women are leading change by carving spaces that acknowledge their identities, and are grounded in their beliefs.

At the World Leaders Forum this month, Guterres said, “Now is the time to transform humankind’s relationship with the natural world…. And we must do so together.” More Muslim leaders and our leaders at large must act on the climate emergency facing the Earth with the courage and conviction of these young women.