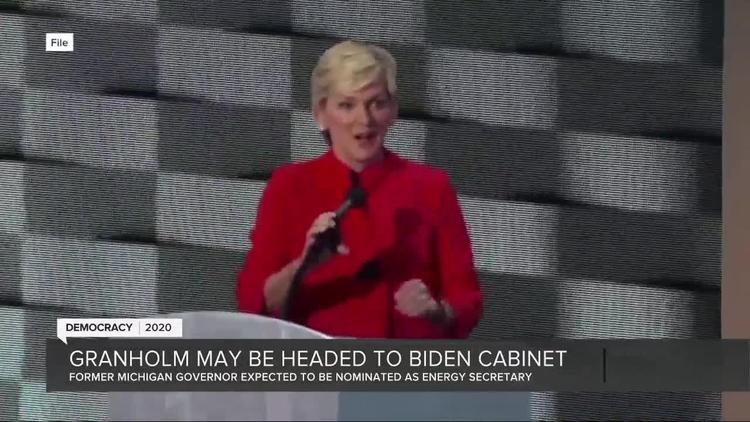 The Washington Post is reporting that Joe Biden will make Pete Buttigieg his secretary of transportation and Jennifer Granholm his secretary of energy. This is very good news for climate policy.

Energy is perhaps the most important portfolio in the Biden cabinet, since it is key to greening America and decarbonizing our economy (which will present a model for the rest of the world).

To get a sense of Granholm’s long term priorities, let us consider this Oct 18, 2011, interview on CNN after she had left Michigan’s governorship.:

“MALVEAUX: You and I spoke about a new investment in Michigan’s economy, the battery making business . . . How important is this new industry for your state?

[In older clip:] GRANHOLM: Well, that’s the whole thing. This is a whole new industry. So what you’re going to see here is one of 16 battery plants that are coming to Michigan or having been built in Michigan. Those 16 plants wouldn’t be here, but for the stimulus dollars. Those 16 plants are going to create 62,000 jobs here over the next ten years. . .

GRANHOLM: … this is an example of this cluster that we created because it was strategic for us as a state. We built car 1.0. We wanted to build car 2.0 and that means the electric car and the battery that’s the guts of it. So we developed a whole strategy to be able to do that, public private partnerships and a partnership with the federal government.

It is true, but for the partnership with the federal government, all of these battery companies and in fact there are 18 now in Michigan, they would be largely in Asia. They would not be in the United States.

We would not be building the electric vehicle to make us energy independent. This is the whole point of this book. The U.S. has to get smart about this.

If Hu Jintao, the premier of China, wakes up every night thinking how can he create 25 million jobs a year for his people. And he is not abiding by the old theories that many of those running for president right now in the United States are abiding by, he’s actively intervening in the economy to create jobs for his people.

We’ve got to wake up and realize we’ve got to craft our own strategy. Michigan’s example in the battery industry is one example of a cluster strategy that was unique to us but in partnership with the federal government and private sector to create jobs.”

Granholm has a philosophy of government incentives for industry to decarbonize. She was an early believer in the electric car, and could see that the auto industry in Michigan depended crucially on the Big Three moving quickly to build better batteries and new EVs.

Granholm was way ahead of her time. She understood early on the centrality of better and bigger batteries to green transportation and electricity. In 2019, General Motors and South Korea’s LG Chem announced a $2 billion investment in the largest jointly owned battery factory for electric vehicles in the world (admittedly, over the border in Ohio, but only 3 hours from Detroit). German lithium-ion battery manufacturer Akasol also announced in 2019 that it is building a plant near Detroit. And Samsung is building a battery pack factory in Auburn Hills, Michigan.

The old Big Three of the 2000s may have resisted Granholm, but now they are begging for exactly the policies she championed as governor. Reuters reports,

In other words, the big vehicle manufacturers are now parroting Granholm’s 2011 book word for word. Lucky for them, she, as Secretary of Energy, will be in a position to help them make the transition to an electric-vehicle future and to begin competing in earnest with the Chinese, who have a big head start. China’s affordable NIO just raised $2.7 billion in what Investors.com is calling an ‘arms race.’ Trump, beloved of Wall Street fatcats for cutting their taxes, didn’t do bupkes for US industry to take it successfully into the 21st century.

As for Buttigieg, he would be the first openly gay US cabinet secretary in history. He would be the second Arab-American secretary of transportation, after Ray Lahoud. Buttigieg’s family name is Maltese; the Maltese are Christian Arabic speakers. His name is formally Abu al-Dajjaj or chicken farmer.

Inside Climate News reviewed his clean energy plans last year. He wants all electricity production in the US to be from clean sources such as wind and solar by 2035. That is ambitious but doable. US electricity is already about 20% from renewables, but hydro is 8% of that. Wind and solar are falling so rapidly in price that we could well get there ahead of 2035.

Buttigieg urges a carbon tax and slapping steep fees on carbon dioxide-emitting vehicles. This approach has worked like a charm in the European Union. It isn’t clear how much of that sort of thing Biden will be able to do without the Senate, but maybe some executive orders will push things in the right direction.

Biden wants to install half a million electric vehicle charging stations by 2030, and Buttigieg would be his point man on that effort.

Trump promoted coal and tried to reduce automobile emissions standards. Biden’s cabinet is more oriented to the corporate sector than those of us on the left would have liked. But if Granholm and Buttigieg follow through on their stated goals, they will begin shifting the dirty-energy US behemoth toward green energy, green transportation, and a soft landing in the climate crisis.