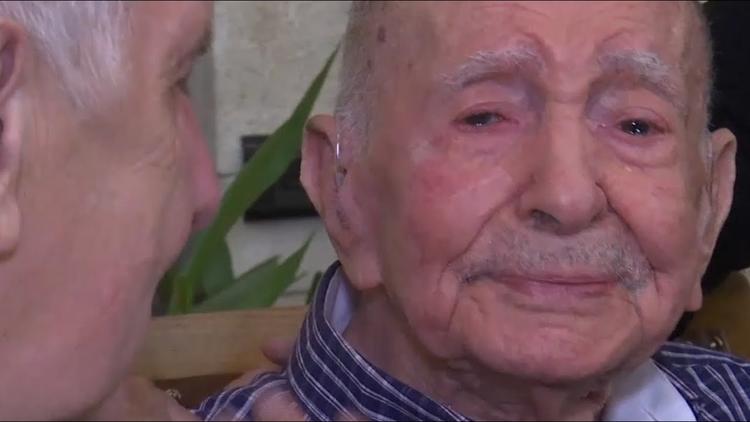 One in four American millennials believe the Holocaust was exaggerated or entirely made up, according to a recent national survey that sought to find out what young adults know about the genocide of nearly 6 million Jews at the hands of Nazis some 80 years ago.

That startling statistic was cited as one of the main reasons that Facebook CEO Mark Zuckerberg decided in October to finally ban Holocaust denial across the social network. Denying the Holocaust ever happened is an enduring form of anti-Semitic propaganda that attempts to deny or minimize the atrocities committed by the Nazis against the Jews during World War II.

Following Facebook’s lead, Twitter announced it, too, would remove any posts that denied the history of the Holocaust, though CEO Jack Dorsey appeared to contradict that policy at a Senate hearing weeks later.

Holocaust deniers have continued to emerge in social media, and perhaps predictably, many have migrated to less restrictive sites like Parler, where hashtags like #HolocaustNeverHappened and #HolocaustIsALie are widespread. “If you want Holocaust denial, hey, Parler is going to be great for you,” Bill Gates recently said of the social network.

While some tech companies address the rise in Holocaust revisionism, and others leave the door open, social networks have played an unwitting role in helping to distort the memory of these horrific events. But as a scholar who studies online extremism, I believe that same community could do more to protect Holocaust remembrance by highlighting the digitized accounts of those who lived through it.

Holocaust denial has been a tool of anti-Semitic movements since the 1960s. Pseudo-academic groups like the Institute for Historical Review, for example, spent years working to distort the public’s aging memory of the Holocaust, which took place between 1933 and 1945.

They tried to cast doubt on the feasibility of the mass executions, and even the existence of the gas chambers. They held annual conferences and gathered fellow deniers to share their beliefs that these events were conjured up by the Jewish people mostly as a means to justify the creation of the state of Israel in 1948.

For decades, most people quickly discarded those claims, because they had heard the firsthand accounts of the survivors who were sent to the camps and witnessed the daily operation of genocide and murder of family members. The allegations of the deniers could also not withstand the accounts of soldiers who liberated the camps and made the terrible discoveries of body-filled crematoriums and mass graves.

But for deniers, Holocaust revision has little to do with history. Denialism is really a pretext for delivering anti-Semitism in the form of “scholarship,” although few academics ever gave it such attention. So hate groups had to find other means of circulation. They found it online.

When the internet took off in the late 1990s, Holocaust deniers and countless other conspiracy theorists saw an opportunity to spread their ideas to new audiences. Anti-Semitic groups could now publish their distortions in well-visited forums, and later in faux-informational websites like Metapedia and The Occidental Observer – extremist communities, in fact, that collectively receive some 350,000 visitors each month.

The internet also gave Holocaust deniers an opportunity to reach a much wider public through social media. As early as 2009, Facebook groups emerged that were dedicated to “debunking” the Holocaust, as #Holohoax became a popular hashtag on Twitter, which it continues to be today. Reddit also became a far-right haven for Holocaust deniers, one of whom gained national attention when he was the invited guest of a Florida congressman to the 2018 State of the Union address.

For deniers, the internet helped repackage their conspiracy into something less recognizable than hate. I’ve long studied this process, which I call information laundering, tracking illegitimate forms of information, like Holocaust denial, that flow through social networks, blogs and search engines. There they intermix with mainstream ideas and slowly become washed of their radical origins.

This decadeslong campaign has resulted in the current surveys that show nearly a quarter of young adults are misinformed or skeptical about the Holocaust. Only now, few survivors are left to correct the record. That makes it even more important to spread the truth. Perhaps the internet can help.

When Gen. Dwight Eisenhower visited the Buchenwald concentration camp in 1945, after its liberation by U.S. forces, he realized how impossible it might be for people to believe the scale of Nazi atrocities. He wrote powerfully of the experience, and of his reasons for going to see it in person:

“The things I saw beggar description. … In one room, where they were piled up twenty or thirty naked men, killed by starvation, George Patton would not even enter. … I made the visit deliberately, in order to be in position to give first-hand evidence of these things if ever, in the near future, there develops a tendency to charge these allegations merely to ‘propaganda.’”

Eisenhower’s words are instructions for future generations. They underscore the need to be a witness to human cruelty in order to protect the memory of, and lessons learned from, these events from those who would try to distort them.

Back online, it may not be enough for social networks to ban Holocaust denial. Similar bans in Europe haven’t limited the rise of anti-Semitism there. Instead, social networks could follow Eisenhower’s example by answering the falsehoods of Holocaust deniers with the true stories of survivors.

The internet is already home to thousands of digitized survivor testimonies. They include oral histories that could be readily activated by social networks to refute those who deny the existence of the gas chambers with the accounts of those who stood inside them or witnessed them at work. Platforms like Facebook, Twitter and Reddit might share the firsthand stories of the Nazi persecutions, separations at the camps or rare reunions, wherever false claims arise, to counter denials with facts.

In the spirit of that counternarrative, I will place my grandmother’s story here. She was a Holocaust survivor. She later wrote about her experiences in Auschwitz, where, upon arrival, she and her sister were separated from their mother and her sister’s son, never to see them again. There are millions of other experiences like hers, and survivors of other genocides whose stories must be retold as well, from Armenia to Rwanda.

Holocaust deniers have long waited for the time when there were no remaining survivors or witnesses to keep these histories alive. But the internet is a powerful archive. Social networks have an opportunity to combat hateful disinformation by posting the personal stories of these tragedies, and end the so-called “debate” about whether the Holocaust ever happened.