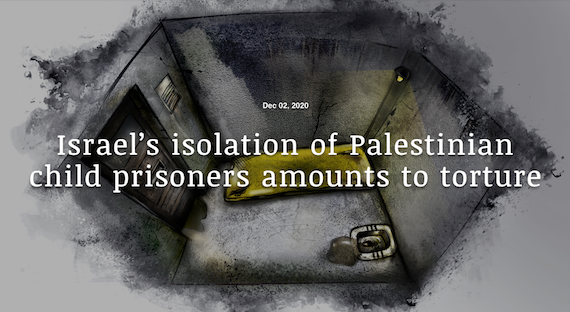 This is child abuse sanctioned by the Israeli government, not an aberration, or a case of a few bad apples. This is standard Israeli practice towards Palestinian children. Torturing children is normal for Israel.

“Israel has the dubious distinction of being the only country in the world that systematically prosecutes between 500 and 700 children in military courts each year,” DCIP states. The organisation estimates that, since the year 2000, approximately 13,000 Palestinian children have been imprisoned, detained, and prosecuted by Israel’s occupation forces.

The interrogation techniques used by Israeli forces are mentally and physically coercive, the report explains. They combine intimidation, threats, verbal abuse and physical violence with the clear intention of obtaining a confession.

Eighty per cent of the children “reported being subject to stress positions during interrogation, most commonly having their limbs tied to a low metal chair for prolonged periods, a position they described as acutely painful.”

This is torture by any standard; torture used to coerce these children into making a “confession”. This goes a long way towards explaining why Israel’s racist military courts — they are used for Palestinians only — have a 99.7 per cent conviction rate.

If you were tortured into testifying against yourself, then any court would probably make light work of “convicting” you. Imagine the terror that these children must feel. DCIP describes this as “cruel, inhuman, or degrading treatment or punishment.”

It points out that this form of torture is practiced by Israel “almost exclusively, during pre-charge and pre-trial detention” and that it’s not generally used after the kangaroo court has secured a conviction. This is evidence that Israel is torturing children solely in order to obtain confessions or gather intelligence under interrogation, DCIP argues.

“International law prohibits the use of solitary confinement and similar measures constituting cruel, inhuman or degrading treatment against children,” explains DCIP’s Khaled Quzmar, “and yet Israeli authorities frequently detain children in this manner. It is widely acknowledged that this practice causes both immediate and long-term psychological harm to children. It must end immediately, and the prohibition must be enshrined in law.”

Israel and the propagandists in its lobby in the West claim that it is “the only democracy in the Middle East.” As this report demonstrates, the routine use of torture — and against children at that — is the action of a dictatorship, not a democracy.