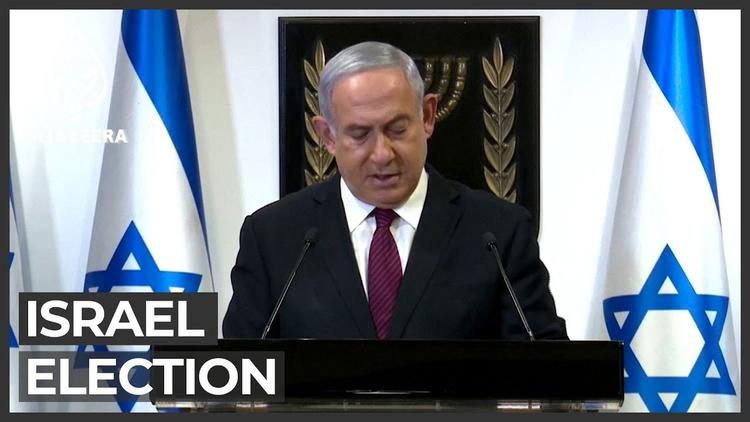 ( Middle East Monitor ) – Israel is heading towards a fourth general election in less than two years, coinciding with another confirmed fact that the competition in this election will be between the components of the Israeli right-wing. The elections will be held against a single backdrop: the opposition of Prime Minister Benjamin Netanyahu’s continued rule which has lasted for over a decade, due to suspicions of his corruption.

It seems that Netanyahu will compete in these elections using the Abraham Accords for peace with four Arab countries, signed under the auspices of the US. The benefits of the agreements on every level, especially political and economic, are being announced and promoted. The economic level is gaining great importance amongst the voters due to the severe crisis the occupation is experiencing because of the coronavirus pandemic, which simultaneously caused a healthcare crisis. The use of these agreements, more than anything else, will allow Netanyahu to stress that the agreements paved the way to a new equation in which Israel enjoys peace with the Arabs, including complete normalisations, without the condition of restoring the land and without even mentioning the occupation of the land in 1967 at all.

It would suit Netanyahu to use the agreements to argue that he kicked the Palestinians to the side, as the agreement with the United Arab Emirates (UAE) mentions the vision of peace according to US President Donald Trump’s plan. This means that the deal of the century came in from the window, while the Arab Peace Initiative went out the door. To further rub salt in the Palestinians’ wounds, based on the agreement, the two parties (Israel and Palestine) are committed to working together to achieve an approved solution to the conflict, responding to the legitimate needs and aspirations of the two peoples, and pushing towards stability and prosperity for a comprehensive peace agreement in the Middle East. Many Israeli official and media reports have concluded that this means there are no longer “legitimate rights”, but “legitimate needs”.

It is hard to believe that the experts who formulated the agreement, including prominent legal experts, do not know the difference between the two terms. Dealing blows to the Palestinians does not end there. The word “refugees” does not appear in the agreement, despite the fact that the refugee issue is an important pillar in the Palestinian cause and several decisions have been made about it in the United Nations institutions and the Arab League. However, there is not even the slightest mention of it.

Contrary to these reports, a few others believed that by means of the “peace cover” in this agreement, Netanyahu had re-promoted control over the Palestinians – not to mention the possibility that he can drive a wedge in the international opposition front to the occupation. This will further reduce the price of the occupation, and will turn it into a permanent state.

Standing on the verge of another Israeli election requires concluding a general judgment regarding Netanyahu’s own position on peace, over the terms of his successive governments since 2009. We do not need much effort in order to conclude that Netanyahu does not believe in peace with the Palestinians. At the beginning of his second term, he was aware, like his predecessors, that the fate of the occupying state depends on its “strength and legitimacy”, according to what the first Prime Minister David Ben-Gurion has repeatedly said. In that particular year, the growing power of Iran posed a threat to the power of Israel, and the legitimacy of the latter was undermined by the aggressive war on the Gaza Strip and the subsequent issuance of the Goldstone Report.

Due to the settlement activity in the West Bank, it is in dire need of more recognition and support. This requires pleasing the world under the guise of the peace process – a behaviour reproduced by Netanyahu from the legacy of his predecessors. Since at least 2000, Netanyahu has been talking about peace more than actually working to make real progress towards it. Instead, he is relying on it to justify policies while holding the other side responsible for any setback.