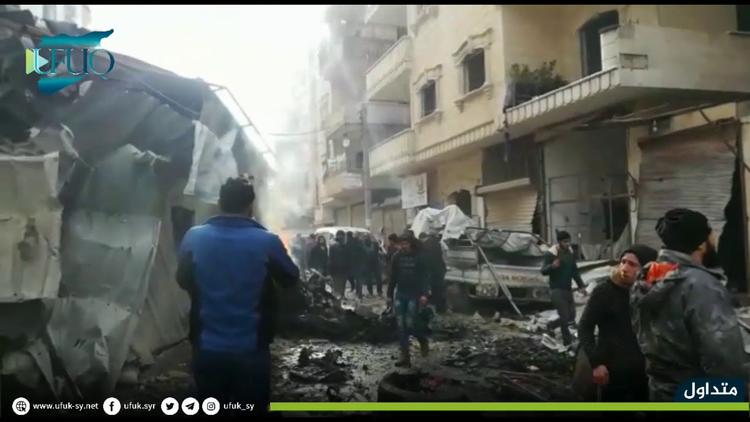 ( Human Rights Watch) – The Russian military marked the fifth anniversary of its intervention in the armed conflict in Syria on September 30. The consequences have been devastating for many Syrian civilians, with hundreds of thousands killed and millions more forced to flee their homes. While all sides to the conflict have committed serious laws-of-war violations, Russia’s intervention has been characterized by the indiscriminate bombing of schools, hospitals, and markets – the civilian infrastructure essential to a society’s survival.

The cost for Syrians who have lost loves ones and whose entire lives have been uprooted – often for the second, third, or fourth time since the war started – is incalculable. But Russian taxpayers may not realize that they are bankrolling this abuse, to their own detriment.

As Russia’s engagement in Syria drags into its sixth year – already over half the length of the Soviet Union’s war in Afghanistan – and as the country reels from the human and economic fallout of the Covid-19 pandemic, Russian taxpayers would be right to question why their tax rubles are being used to bomb of schools and hospitals in Syria.

A new Human Rights Watch report examines the most recent offensive by the Syrian government and its Russian ally: an 11-month operation to retake Idlib governorate, one of the last strongholds of anti-government armed groups, from April 2019 to March 2020. We detailed 46 unlawful attacks that killed civilians and damaged and destroyed civilian infrastructure.

While a ceasefire came into force in Idlib in March, Russians should be pressing their government for answers before any fighting resumes.

In at least one case, a Russian military officer temporarily commanded an entire corps of the Syrian army. The coordination of this support has involved the highest levels of the Russian military, the defense ministry, and President Vladimir Putin.

In only the first six months of the Russian intervention in Syria, President Putin said the war had cost the country approximately 33 billion rubles. Another study put the cost of the operations at between $2.4 and $4 million per day, factoring in the costs of sorties, airstrikes, personnel, and supplying Russian airbases. An anonymous Russian government official told the Russian media in late 2015 that Russia was initially spending 244 million rubles per day, but that the amount had nearly doubled, to 444 million rubles per day.

A detailed analysis in 2015 by RBK found that each airstrike cost up to 5.5 million rubles. Given the large number of sorties and airstrikes conducted by the Russian Aerospace Forces, RBK concluded that Russia spent over 1 billion rubles per week on airstrikes alone.

More recently, a 2018 study by Yabloko found that the war cost Russia up to 245 billion rubles from September 2015 to March 2018, with air and missile strikes alone totaling up to 209 billion rubles.

And what is this money funding? We spoke to a teacher from Ariha, in Idlib, who described how the Syrian-Russian military alliance fired a rocket that struck right next to the Khaled Bashir Halabieh primary school, where she teaches, at about 1 p.m. on January 5, 2020. She said that as she rushed out of the school with her students, “They were all screaming for me out of fear. And I, like them, was helpless. There was nothing I could do for them. I looked at them and there was nothing I could do other than calm them, tell them not to be afraid, tell them to pray, tell them that it would soon be over.”

She was particularly fearful because her own children were among the 445 students attending the school, and she thought they might have been killed. The explosion shattered the windows and damaged the doors of her school, and also damaged another primary school and a nearby preschool, as well as many neighboring homes. The strike killed 13 civilians and wounded another 25. The teacher’s children were luckily spared. She described how teachers scrambled to repair the damage immediately after the attack – students would need to sit for their national midterm exams five days later.

What she did not understand was why the Syrian-Russian military alliance had fired a rocket toward her school since there were no fighters or military bases in the area. Syrian and Russians officials have said their attacks in Idlib are targeting terrorists. But our interviews with over 100 victims and witnesses, and analysis of dozens of satellite images and over 550 videos, showed no evidence of fighters or military targets in the vicinity of this attack or any of the other 45 attacks we documented.

Our research suggests that these repeated attacks on civilian infrastructure in populated areas – in which there were no apparent military objectives – were deliberate, and the objective may have been to deprive civilians of the means to sustain themselves and force them to flee. With over 20 million Russians

Channel 4 from last spring: “How we investigated a hospital bombing in Syria – and found evidence suggesting Russia was to blame”