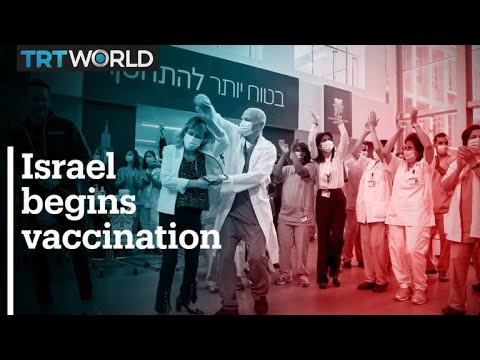 Ann Arbor (Informed Comment) – Some ten percent of Israelis have already been given the coronavirus shot, showing what an efficient government can do for its citizens with the right medical and administrative infrastructure. The Trump administration has not been able to ramp up the actual shots in arms, despite shipping millions of doses of vaccine to states and localities.

There’s just one problem with Israel’s success. It is only within Israel proper. Israel militarily occupies the Palestinian West Bank and keeps the little Palestinian Gaza Strip under blockade. In international law, Israel is responsible for the health and well-being of the people it militarily occupies. Not vaccinating them against a pandemic is a war crime.

You know how many shots Israeli physicians have given the Palestinians under their rule? None.

This, even though Israeli squatters who have stolen Palestinian land in the West Bank are being given the shot.

There has been a dangerous spike in cases and deaths during the past two months in the Palestinian Territories.

The ministry of health of Occupied Palestine announced on Friday that 18 people died of COVID-19 that day, and 1,450 new cases were recorded, this for a population of 5 million.

These statistics are almost certainly missing many cases and deaths, since Palestinians living under the Israeli boot have lost tens of billions of dollars in potential income and their medical infrastructure is ramshackle. There is a severe shortage, for instance, of intensive care units. On top of all that, the Trump administration has cruelly and ruthlessly slashed aid to the Palestinians and has knee-capped the UN Relief and Works Agency that used to help out Palestinian refugees. These are families ethnically cleansed by the Israelis in 1948 and 1967.

As far as the health ministry can tell, 13% of the Palestinian population tests positive for the virus and about 1% of those stricken end up dying. That would be 650,000 people stricken, of whom 6,500 will die. They wouldn’t die at that rate if they were getting the vaccine.

The official Maan News Agency reports that the spokesman for the ministry of health, Dr. Kamal Al-Shakhra, said this week that the first doses of the coronavirus vaccine will likely arrive in the Palestinian Territories some time in the next two weeks. The Palestine Authority has corresponded with the vaccine producers, including Astrazenica, Moderna, Pfizer and Russia’s Sputnik 5. It wants to buy 4 million doses, which will arrive in succession over the coming months. He said that 100,000 doses would be reserved for frontline workers such as medical personnel, as well as those with severe or chronic diseases, the elderly and security personnel.

The ministry had wanted to get all of the vaccine doses from a single supplier, but the companies said they could not meet that demand any time soon.

This story sounds worse and worse to me the more I hear about it. It sounds as though Palestinians won’t be getting vaccinated any time soon, or even just have access to a vaccine for months. And one of the vaccines they mentioned, the Russian Sputnik V, isn’t even out of third phase clinical trials.

A further problem is that a weak, helpless and oppressed people like the Palestinians are suspicious, having been screwed over by us so many times, about something like an American-made vaccine. Dr. Al-Shakhra urged them not to pay attention to the conspiracy theories circulating about vaccine side effects.

The ministry of health is training medical teams and readying clinics throughout the Palestinian Territories so that they will be ready when the first doses finally do show up. Well, they seem to be better in that regard than the Trump administration.

The only thing Palestinians have going for them in this health crisis is that they are an incredibly young population, with a median age of only about 21. The median age of Israel is 30, and that of the the US is 38. So far, young people have had less of a proclivity to fall ill, and have survived much better if they do than their elders — though of course some tragic deaths have occurred among children and youth.

As for the Israeli government, declining to inoculate the Palestinians is not only a war crime, it is terminally stupid. Thousands of Palestinians work in Israel, and the possibility for transmission of new cases of the virus is always there. We don’t know how long the various vaccines work. In this issue as in all others, Israelis cannot be safe and have well-being if Palestinians lack safety and well-being.

As for war crimes, here’s the cite: The 1949 Geneva Convention on the treatment of occupied populations, which was intended to stop people from acting as the Axis leaders did, has this to say (Article 56):

“To the fullest extent of the means available to it, the Occupying Power has the duty of ensuring and maintaining, with the cooperation of national and local authorities, the medical and hospital establishments and services, public health and hygiene in the occupied territory, with particular reference to the adoption and application of the prophylactic and preventive measures necessary to combat the spread of contagious diseases and epidemics. Medical personnel of all categories shall be allowed to carry out their duties.”