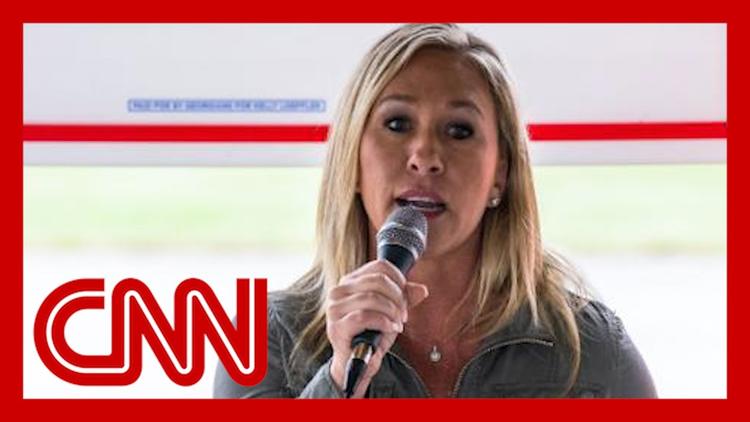 Ann Arbor (Informed Comment) – Kevin McCarthy, the minority leader of the US House of Representatives, and his fellow Republican leaders, have assigned Marjorie Taylor Greene to the Education Committee. Greene has called the 2018 school massacre in Parkland, Fl., a “false flag,” so her service on that committee should be reassuring to all American parents of school-age children. Gee, if the Republicans take back the House in 2022, maybe they’ll make her chair of the Education Committee.

I should make clear that I am the educator in my title. I am deeply offended, as an teacher for nearly 37 years, that the GOP would so demean my field as to saddle us with this violent conspiracy theorist who disrespects every core value of American education. We are about evidence and critical reasoning, not about believing every whacko allegation anybody on the street makes.

If a teacher quoted in the classroom some of what Greene has said, they might actually be disciplined, and their students would certainly complain. So why is it all right that she should help shape Congressional education policy? Why should she have a vote on the education budget?

The United Nations has a system of representative, rotating committees, and there is no prerequisite for serving on them. Republicans like Nikki Haley, former ambassador to the UN, used to complain when a country with a particularly horrific human rights record was chosen to serve on a human rights committee.

But now the Republican Party is behaving in exactly the same way.

Mind you, the Republican Party supported Greene’s run for Congress. Key party leaders campaigned for her. The Republicans are tied to her like a Siamese twin. You now cannot have the one without the other.

Em Steck and Andrew Kaczynski at CNN undertook the unpleasant duty of reviewing the Facebook activity of Marjorie Taylor Greene (R-GA) in the past few years. They turned up some doozies from before the weird people of Georgia’s 14th Congressional district thought it would be entertaining to send her to Congress.

They write that she “liked” a posting that House Speaker Nancy Pelosi could be more quickly removed by “a bullet to the head.” She also “liked” a posting about assassinating FBI agents, whom she sees as part of a Deep State apparatus that threw obstacles in the way of Donald Trump shutting down a pedophile ring among top Democrats.

Steck and Kaczynski report that she put up the video of a speech of hers in which she opined that Pelosi was “guilty of treason” and continued that treason is “a crime punishable by death.”

If any of her Facebook followers formed part of the Capitol black shirts, they might well have taken Speaker Pelosi out, having been whipped up in this way by Greene.

They say that on being presented with the evidence that she has all along been a violent conspiracy nut, she maintained that her Facebook page was run by others (who?) and that she is not responsible for their behavior (why, if it is her page?)

The Republican Party has become the party of violent conspiracy theorists and of extremist white supremacy. Some 63 percent of Missouri Republicans still are favorable to Sen. Josh Hawley, who tried to overthrow the duly elected government of the United States, and gave a fist salute to the Capitol white terrorists. Only about a third of registered Missouri voters over all still support him.

In a new Washington Post/ ABC poll, 76% of Republicans want the Republican Party to continue to follow the lead of Donald Trump, despite his 30,000 lies, his corruption, and his assault on democracy.

As for Greene, there was that time she posted to Facebook an image of herself brandishing an AR-15 assault weapon, standing before a montage of three members of the Squad, left-leaning congresswomen of color in Congress, Alexandria Ocasio-Cortez, Ilhan Omar, and Rashida Tlaib. 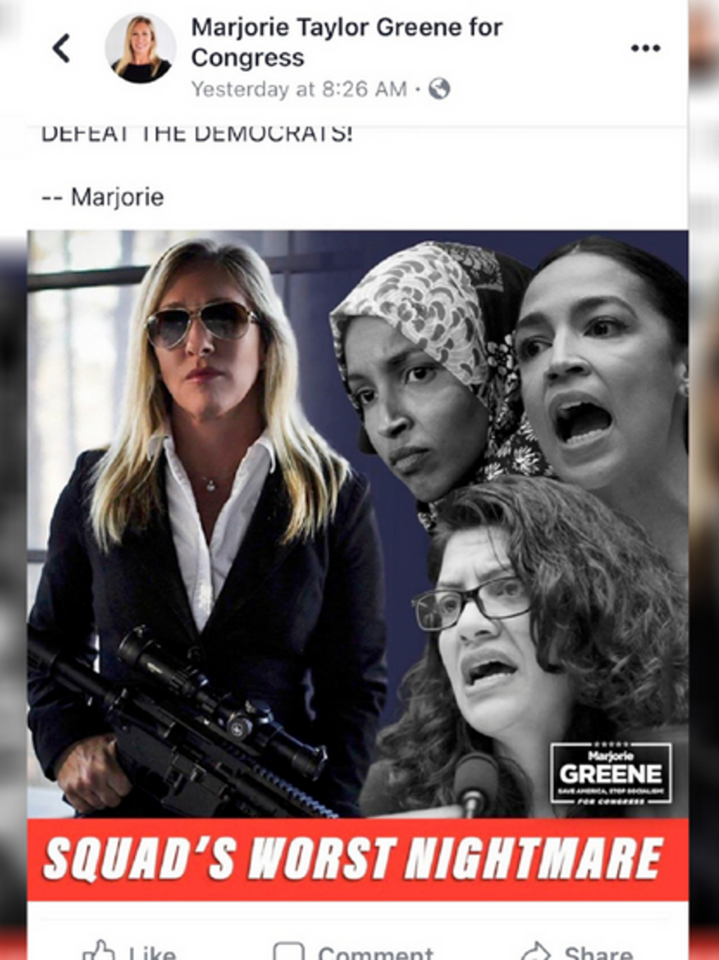 I think it is fairly clear that she is threatening to shoot them. Facebook took down the photo as violating its community standards.

During the white terrorist attack on the Capitol, which Greene helped whip up by asserting that “Trump won” and attempting to decertify Joe Biden, Rep. Ocasio-Cortez said that she declined to go to a safe room where she knew some of her Republican colleagues were sheltering, because she did not trust them.

Gee, I wonder why.