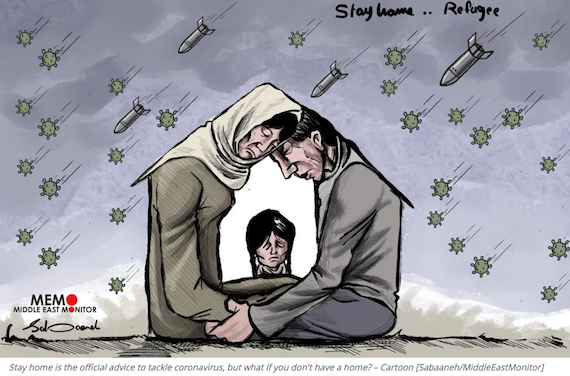 ( Middle East Monitor) – With the onset of the Covid-19 pandemic in late 2019, interest in the plight of the world’s most vulnerable populations, refugees, began to wane. A year later, and it is as if the refugee crisis has disappeared completely.

It hasn’t, though. In fact, the world’s erstwhile leading humanitarian crisis has deteriorated substantially, despite it not being a recurring news item.

Victims of war, poverty and international neglect prior to the spread of the deadly pandemic, the refugees were forced to contend with yet more hurdles that compounded their protracted, collective agony. While worsening the refugees’ existing atrocious conditions — statelessness, malnutrition, lack of healthcare, education and so on — the global lockdowns brought their journeys to a complete halt, stranding them in time and place, and leaving them bereft of hope and, at times, blamed for allegedly spreading the coronavirus. The reality is that refugee camps contain the hidden victims of Covid-19.

It is convenient to argue that a global pandemic which affects the entire population of the world is expected to eclipse what now seems to be a secondary crisis afflicting a far smaller number of people. Not only is this thinking cruel and inhumane — a stricken refugee dying in an enclosed refugee camp with little or no access to proper medication should be treated with great urgency — but it is also dishonest. Indeed, the refugee crisis, which was exacerbated during a decade of political upheaval in the Middle East, has rarely been an international priority.

The many conferences and high-level meetings held to discuss the refugee issue, especially Middle Eastern refugees arriving in Europe, were rarely serious attempts to address collective responsibility towards the world’s rising refugee population honestly, or even earnestly, before responding immediately to its horrific consequences.

Instead, attention was often focused on the political and “security” cost of allowing refugees a safe passage across Europe’s national borders. This has contributed to the rise of racism and chauvinism, which are flourishing due to the politics of fear and sinister theories about refugees being the main source of “terrorism” and social instability.

This unfortunate and dangerous reality is particularly evident in Europe and the United States, as well as other parts of the world. According to this skewed thinking, the refugees are a burden, and a formidable threat.

The pandemic has confounded an already confused and complex picture. Thankfully, there is no need to speculate about this, as the ample research conducted by international human rights groups can help us appreciate the enormity of the challenge at hand.

The most urgent issue pertaining to the refugee crisis now is that of access to proper healthcare which, according to the Mixed Migration Centre, is related to “lack of funds, not knowing where to go, and discrimination against foreigners”. In many parts of the world, especially in Latin America, the lack of documentation serves as a double-edged sword. Without residency permits, refugees are unable to find steady jobs, without which they are also denied access to healthcare.

While income loss resulting from the shutdown of various economic sectors worldwide has aggravated existing inequality, pushing unemployment — and thus poverty — to significantly higher levels, vulnerable refugees are in a far worse situation than anyone else.

According to the UNHCR, an estimated “70 per cent of refugees live in countries with restricted or no right to work”. Considering that the refugees were already below the poverty line, vulnerable and used as cheap labour, the Covid-19 lockdowns have pushed them even lower into levels of want and exploitation unprecedented in recent years.

The same logic applies to other fields, such as education. As the pandemic resulted in new and creative ways of teaching and learning — online, for example — refugee children rarely have the same opportunities. With no alternative to whatever basic schooling is available within refugee camps and, considering the growing poverty among refugees, UNHCR has reported that school enrolment among refugee children has been falling.

Of course, there is also the issue of the direct and deadly impact of Covid-19 on refugees. “Numbers of infections in [refugee] camps across Iraq, Syria, Lebanon and the Palestinian territories have risen sharply,” since the start of the pandemic, Britain’s Guardianreported recently.

Lowering the lethal impact of the disease in these refugee camps is a challenge, not only because of the indifference about helping refugees, but also because many of these camps are located within war zones and effective social distancing is almost impossible. To provide safety equipment, testing kits, life-saving medication or the newly-produced vaccine requires a lot of political will on many levels. Alas, in the context of the refugee crisis, experience has taught us that such willingness is rare.

One can only hope that our collective tragedy and loss could produce enough kindness in our troubled world to place the refugees at the centre of our thinking and policymaking. We have to look beyond the short term because, when Covid-19 has come and gone, the refugees will still be there, hungry, stateless and abandoned.