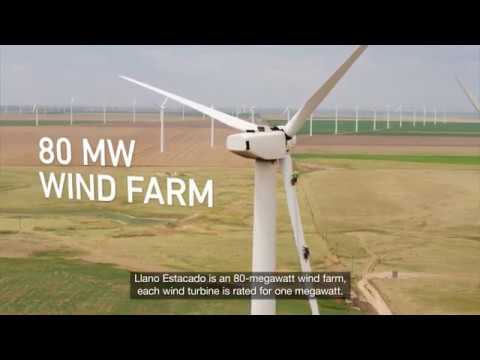 Ann Arbor (Informed Comment) – While conservatives like Texas governor Greg Abbott and Tucker Carlson have been busy putting down wind turbines as unreliable, America has been voting with its pocketbook. The verdict? We want more wind-powered electricity, precisely because it is inexpensive and reliable.

The report says, “The U.S. onshore wind sector posted its highest-ever year of installations in 2020, topping 17GW. The sector has shown remarkable resilience in the face of the pandemic.”

“GW” stands for “gigawatt,” which means a billion watts. You know how you might have a 100-watt light bulb in your lamp at home? 10 million of those.

A gigawatt typically powers about 300,000 American homes, so we put in enough wind power to provide electricity to 5,100,000 homes last year, in the midst of the pandemic and its accompanying recession. That is the equivalent of nearly 4 percent of American homes, that have been provided electricity by clean wind, in just one year.

If we could just repeat our 2020 performance every year for the next ten years, we’d be able to power 40 percent of American homes with wind alone. Unfortunately, new wind farm startups are not planned at the same pace as they were in 2020, in part because of expiring congressional incentives. America, you know what to do.

Of course, that isn’t good enough if we are to reach our Paris Climate goals, which the US government has just reaffirmed as a goal, but reentering the accord under the Biden administration. We have to power not only homes but businesses and other buildings. And we need better storage so that the wind power doesn’t get wasted, and so that we can store it when the wind is not blowing.

So we need a carbon tax to reward companies that use renewables, and punish the dirty polluters. It has to be crafted so that working people are held harmless.

Another piece of good news is that US-based companies made a lot of our wind turbines, creating jobs. The Bloomberg report notes, “The U.S. is now home to four major turbine manufacturers: General Electric (GE), Vestas, Siemens Gamesa Renewable Energy (SGRE). In the U.S., GE and Vestas accounted for 87% of local manufacturing capacity in 2019.” GE is particularly oriented to the US market. The report adds, “Historically, almost two-thirds of GE’s all-time installations by capacity have been in its home market, the U.S., compared to a quarter for Vestas.”

So what do Greg Abbott and Tucker Carlson have against GE? Are they socialists or something?

One big area of potential growth is offshore wind, which has enormous potential. But the sector has run into major permitting problems. To the extent that the Biden administration can, it should swing into action to make permitting easier for offshore wind.

The Bloomberg report notes, “The U.S. offshore wind sector is poised for rapid growth but has been in limbo as as the country’s first potential large-scale project awaits a federal permit. Despite the sector’s great promise, there are still only 42MW of turbine installed in U.S. waters.”

It was a good year for solar, too. Bloomberg says, “Utility-scale installations rose to 12.3GWdc in 2020.” (That is, 12.3 gigawatts direct current, i.e. from the panels themselves.)

That should cover 3,690,000 homes. It means they get their electricity from clean, free sunshine and are not spewing dangerous carbon dioxide into the atmosphere, where it will trap the sun’s heat and keep it on earth.

If this sort of progress could be made in a pandemic year and under a Trump administration that worked against wind and solar on behalf of dangerous, dirty fossil fuels, imagine what we can accomplish under the Biden administration.

If you are the sort of person who writes letters or emails to your congressional representatives and senators, do press them to pass legislation promoting wind and solar and to put in a carbon tax. If you aren’t, you could start. Your representatives in D.C. are very sensitive to constituent letters, and typically they multiply them in their minds because they figure that for every person who writes, there are a certain further number of people who feel the same way but didn’t write.

Mitsubishi: “The Growing Role of Wind Power in America”