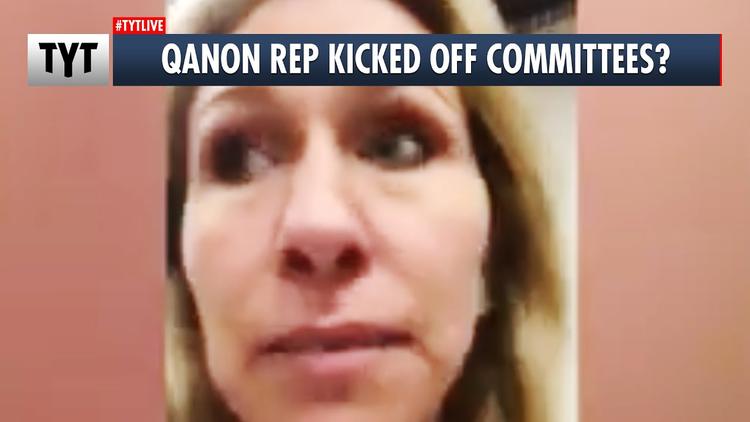 Ann Arbor (Informed Comment) – From Sarah Palin’s alarmist and mendacious charge of death panels in the Affordable Health Act to Benghazi, where the smarmy Mike Pompeo tried to hang a terrorist attack around the neck of secretary of state Hillary Clinton (who was not in charge of military or intelligence decisions), the brand of the Republican Party in recent decades has been a mixture of the Big Lie and outrage.

Now, the party cannot summon any outrage for the Big Lie. Republican Senators will not impeach Donald Trump for inciting a mob that included armed white terrorists to kill them.

The Republican members of the House refused on Wednesday evening to take Marjorie Taylor Greene off the Education Committee even though she had until recently branded major school shootings as false flag attacks staged by gun control advocates. (Yes.) She also actively harassed Parkland survivor David Hogg. She also believes that Trump is a divine agent appointed to break up a high Democratic Party pedophile ring that drinks children’s blood, and that a Jewish-funded space laser set the California wildfires.

David Corn at Mother Jones broke the story on Wednesday that Greene moderated a whole Facebook group characterized by racist slurs and death threats. She is still listed as a moderator, at a site where posters speak of taking a hammer to the heads of Democrats and going Punisher on them.

House minority member Kevin McCarthy has perfected the art of hunting with the hounds and running with the hares. He denounced Greene’s beliefs and those of the QAnon cult to which she belongs, but refused to take any action against her. This, despite the precedent of having stripped Steve King (R-IA) (the R stands for Racist) of his committee assignments after he defended the terms “white nationalism” and ‘white supremacy.” King was a model citizen compared to Greene.

McCarthy is hoping against hope that he can talk the talk without having actually to walk the walk.

About half of the Republic representatives rose to their feet and applauded her.

They gave her a standing ovation.

I guess they thought her space laser idea was really great, not to mention her call to hang Barack Obama or her liking of a Facebook post advocating shooting Nancy Pelosi in the head.

McCarthy also engaged in some whataboutism, trying to draw an equivalence between Greene and Rep. Ilhan Omar (D-MN), who got into trouble for pointing out that the AIPAC lobby exists and funds politicians’ campaigns. I somehow don’t think that is exactly like alleging Jewish space lasers burning 5 million acres or asserting that Muslim immigration to Europe and the US is a Jewish billionaire plot against white Christian workers.

The Democrats in the House are determined now to remove her from her committee assignments and to make their Republican colleagues vote publicly on the issue. If McCarthy were any kind of leader at all, he would have spared his party this debacle.

The House Republicans have experienced this embarrassing loss of spine, which has reduced them to floundering slugs, because Trump is still the leader of their party and he supports Greene. Some three-fourths of the party faithful, moreover, are with Trump. So voting against either one of them bears an uncanny resemblance to resigning ostentatiously from Congress, since they will likely be primaried and lose the 2022 election even before they can enter it. For those relative newbies still not well connected enough in Washington or back home, such an unceremonious departure could mean loss of millions in future lobbying gigs.

So the real problem here is what the Republican Party has become. There are still normal people in the party, but even they are mostly congenial to the white supremacists, the Nazis, and the tin foil hat conspiracy theorists. The Republican base gave us Trump, as they rejected over a dozen better qualified and eminently more sane alternatives in the 2016 primaries. Watching Newsmax and One America and even what they view as inexcusably socialist Fox, listening to outrage 24/7 on radio, following Twitter and Facebook feeds of the Aryan race and the anti-vampirism activists, treasuring each attack on a wealthy Jew they can find, rank and file Republicans have become something ugly and un-American, and party leaders like Kevin McCarthy have decided not to make a stand against it.

The Republican Party backed Greene’s run for Congress. Party bigwigs campaigned for her. The party faithful apparently would be happy to make Greene president in future.

They are now the RepubliQan Party.