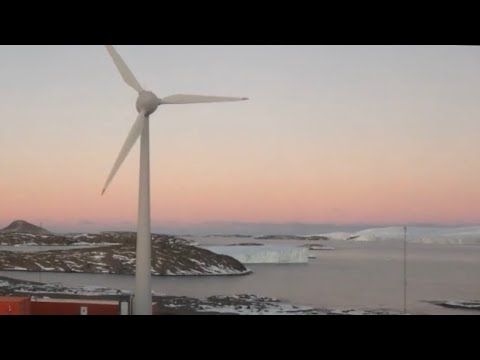 Ann Arbor (Informed Comment) – Texas governor Greg Abbott alleged that the massive power outages in his state demonstrated the unwisdom of moving to renewable energy, attempting to blame the crisis on the state’s wind turbines. Like most of the things Republican politicians say publicly, this allegation was a lie.

The southern-most wind farm in the world, at Ross Island in Antarctica, has three functioning turbines.

We don’t have to go so far to find wind turbines working well in wintry, icy conditions. Take those at Syracuse in New York. They are equipped with sensors to discover when the blades have iced over. They are then turned off and a heating package on the blade is turned on to melt the ice. When that is done, the turbine is started right back up. Of course, the sensors and heating element cost a little money to install and run. The investment makes more sense in New York. But such packages could be installed on the Texas turbines if the owners were willing to cut a little into their profits. Since Texas has a big winter storm as often as every 5 years, that might make sense. But, again, two-thirds of the Texas wind turbines were unaffected by the storm, and they fed in crucial power when it was most needed.

Some 42% of Iowa’s electricity comes from wind, and that state has some pretty bad winters but no outages of the Texas sort. Fernando Garcia-Franceschini reports for ABC affiliate KCRG in Dubuque,

About a year ago, a disinformation campaign was waged on Facebook against solar panels and wind turbines in Germany, alleging falsely that severe winter weather impeded their operation.

I have solar panels in Michigan, so allow me to let you in on a little secret. Solar panels run warm, and they melt the snow. Of course if it is particularly heavy you can get a long-handled broom-like tool to wipe them clean. The panels work by transforming sunlight into electricity in accordance with a finding by Einstein. They aren’t affected by cold.

“On claims that 30,000 wind turbines were idle in Germany, Wolfram Axthelm, managing director of the country’s Wind Energy Association, said by email that “the claim that weather conditions would cause thousands of wind turbines across the country to stand mostly idle is simply false.”

Over the weekend of February 6 and 7, when temperatures dipped below 14 degrees Fahrenheit (-10 degrees Celsius), the amount of electricity generated from wind was actually above the monthly average, Axthelm said.”

Texas in any case only gets 10% of its electricity from wind, and the vast majority of the state’s wind turbines functioned just fine. The crisis was caused when the equipment in the coal, gas and nuclear plants froze up.

The freezing of the instruments happened because the Texas power plant owners did not want to dip into their profits to spend money on winterizing them, even though severe winter storms strike Texas twice every decade.

If people like Greg Abbott and his cronies in the Texas energy industry cared as much about people as about profits, they would have winterized. In fact, they might have been forced to do so if the Texas grid were connected to the federal one. But the Texas elite deliberately did not connect to the federal one in order to avoid regulation.

Abbott was the second great mistake of George W. Bush, with the first being the Iraq War fiasco. Bush appointed the attorney Abbott to the Texas supreme court. He later was elected attorney general and then governor. Abbott did his undergraduate degree in business administration and has none of the intellectual breadth a liberal arts education could have given him. He either doesn’t understand science or doesn’t want to, like a lot of high Texas GOP politicians. He is a creature of Big Oil, which funds his political campaigns.

Abbott won’t acknowledge that human burning of fossil fuels is causing our climate emergency. He could not understand the urgency of mask-wearing and social distancing and lockdowns of certain businesses to fight the coronavirus pandemic, and killed a lot of people with his initial anti-science policies.

Texas gets 25% of its electricity from wind because it is more economical than fossil fuels and the cost of its own fuel, wind, is zero and can be predicted out to twenty-five years. Texas mayors connected to the wind farms in the state’s wind corridor prefer the steady reliability of wind with regard to future costs. As noted, wind supplies 42% of Iowa’s electricity quite reliably, and likely the same thing will happen in Texas.

Abbott should come clean about his lie regarding wind turbines, and should have the decency to admit that burning oil and gas is harming the planet and blighting human lives. All he has to lose is his prison of G.O.P.looniness.