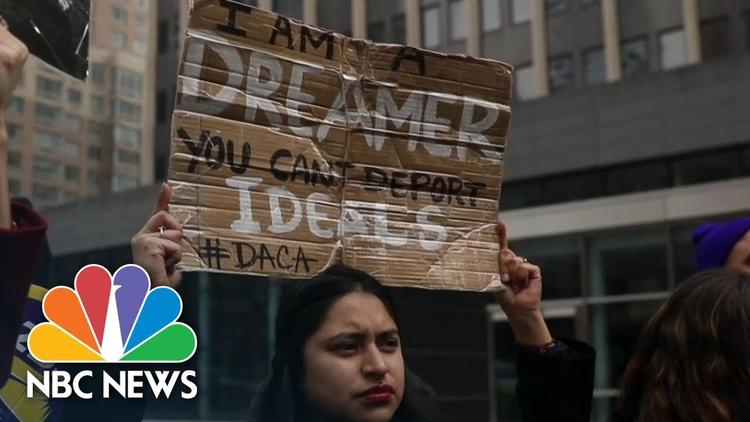 ( Otherwords.org) – Years of advocacy have made DACA the floor of what’s possible, not the ceiling. By Vanessa Meraz | February 10, 2021

My father’s tired eyes lit up in a way that I had not seen since my sister was born. “Esto nos podría cambiar la vida,” he said. “This could change our lives.”

This was his hopeful reaction to the Biden-Harris administration’s proposal of legislation that would create a path to citizenship for immigrants like him.

He is exactly right — it could change our lives. But only if we keep the new administration accountable so that it actually does.

My family and community have lived in the shadows for decades, and I have never felt closer to basking in the sun. But too often, politicians have exploited our hopes for votes, only to backtrack. For these promises to become a reality for my father, mother, and all 11 million undocumented Americans living in the United States, we must continue to push past the status quo.

The early signs, at least, are promising.

On day one of his administration, President Biden signed an executive order announcing his commitment to preserve and fortify the Deferred Action for Childhood Arrivals (DACA) program, which survived years of attack from the Trump administration. DACA temporarily protects undocumented people like me, most of whom immigrated to the U.S. as young children, from deportation.

Our families deserved this moment of relief.

President Biden’s pledge to preserve DACA is a welcome one, not only for the immediate positive impact it has on the lives of hundreds of thousands of DACA recipients and our families, but also because it sets a refreshing change of pace for what’s to come.

By supporting the preservation of DACA at the outset, the Biden-Harris administration has confirmed that DACA is the floor — and not the ceiling — of what’s possible. It’s a commitment to go beyond the parameters of past efforts, moving away from temporary fixes and toward permanent relief for all.

In another encouraging sign, Senators Dick Durbin (D-IL) and Lindsey Graham (R-SC) recently reintroduced the Dream Act, which would offer a pathway to citizenship for over 2 million eligible undocumented people, including DACA recipients. It would also include Temporary Protected Status (TPS) and Deferred Enforced Departure (DED) holders seeking safety from life-threatening conditions in their countries of origin.

Passage of the Dream Act is a necessary step. But it must be just the first of many.

President Biden has encouraged Congress to pass legislation that would create an eight-year path to citizenship for all undocumented people in the United States and place DACA recipients, TPS holders, and immigrant farmworkers on an expedited path to citizenship.

The immediate action we’re seeing from this administration on immigration is no fluke. It’s the result of advocacy, tenacity, and resilience by many Black and brown advocates who have consistently refused to accept the status quo.

In the coming weeks and months, we have a chance to bring safety and opportunity to all 11 million undocumented immigrants and our families in the United States. While the Dream Act is indeed an important step in ensuring millions of undocumented youth no longer have to live with uncertainty, it would still leave Dreamers like me worrying about the ever-present fear of separation from our loved ones who don’t benefit from the temporary security that DACA provides.

Legalization efforts must be inclusive not just of DACA recipients, but also of our children, families, and communities — who, like mine, all call this country home.

Vanessa Meraz, a DACA recipient who immigrated to the U.S. when she was three years old, works on the Immigration and Immigrant Families policy team at the Center for Law and Social Policy (CLASP). This op-ed was distributed by OtherWords.org.