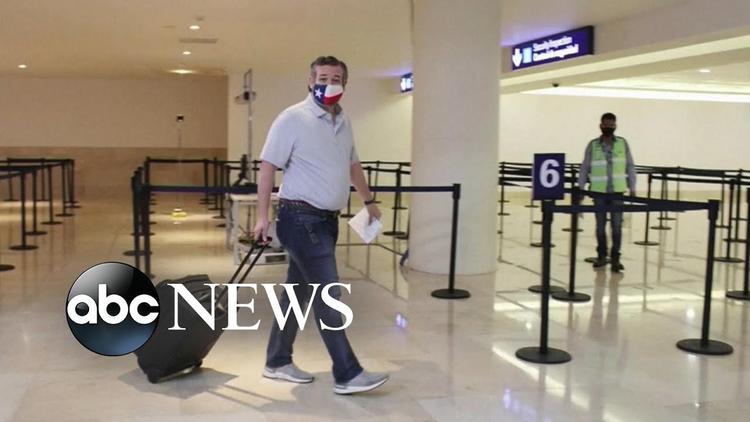 Ann Arbor (Informed Comment) – Sen. Ted Cruz abandoning Texas to its fate, with millions suffering without power, to go off on a vacation in Cancun, Mexico, is the perfect metaphor for America in the age of monopoly capital.

After all, many American corporations have taken a prolonged tax holiday in the Caribbean. Some 18 large US corporations paid no income tax 2008-2015 according to Investopedia, and one of the way to avoid taxes is to offshore the money. You can then borrow the money from your Bermuda or Turks and Caicos subsidiary as a way of repatriating it without paying taxes on it.

US taxpayers even gave their money as pandemic relief to companies that paid no income tax by offshoring profits.

The big problem with Texas electricity is that the state refused to integrate with the federal grid to avoid federal regulations, so that investors could make more money. The owners of the power plants then did not bother to invest in equipment that would keep their equipment from freezing up during a severe winter storm of the sort that comes every five years or so. That was so that the rich could take home more profits.

I say, nationalize the whole US electric grid. We need to do that to defeat climate change.

The Republican Party has made a bargain with evangelicals and other populists, to curb abortion rights and latently uphold white supremacy and white Christianity, in return for which the filthy rich will be allowed to pay virtually no taxes and will avoid environmental and other regulations.

One of the implications of this bargain is extreme hypocrisy. The filthy rich and their go-fers like Cruz don’t actually care about the welfare of the evangelicals, populists, or pitiful white nationalists who have nothing to be proud of but the lack of melanin with which they were born. They don’t actually care, for the most part, whether women have abortions. They care if they can make more money, even if, as with Big Oil, in ways that wreck the planet.

So of course Cruz could not care less if his constituents were freezing to death and had no electricity and their pipes were busting.

Cruz has been completely irresponsible about the pandemic. He has insisted that the CDC instruction that people who have been vaccinated continue to wear masks is “unscientific.” Masks are very effective against the pandemic. Why talk them down? The Austin American-Statesman fact-checked him and found “pants on fire.”

Texas could have had a responsible senator like Beto O’Rourke, who has been working the phones to organize wellness checks for Texas seniors during the crisis. Populism, the lower middle class hatred of elites, has real limits as a governing philosophy. In practice, the Republican version allows tools of the filthy rich to pose as champions of the common person. Yes, you can stick it to the man by voting in pricks who give the finger to polite society.

But then when you need government help, you can’t get it. All you have is a prick in office who can’t get you electricity because he and the people he actually represents are lining their pockets at your expense. They will, however, be willing to pose giving you the finger.