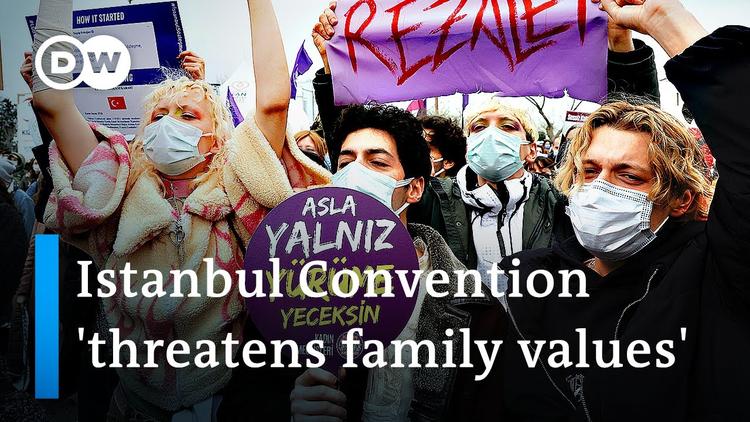 In a single-paragraph statement issued at around 2am on March 20, Turkey’s president Recep Tayyip Erdoğan pulled his country out of the Council of Europe’s Convention on Preventing and Combating Violence against Women and Domestic Violence. Thus, at a stroke – and going completely against Turkey’s constitution – Erdoğan has ended Turkey’s involvement with a human rights treaty that was signed in Istanbul.

The Istanbul convention specifically aims to prevent and combat violence against women through a “four pillars” basis: prevention, protection, prosecution and coordinated policies. The convention is a legally binding instrument which obliges the parties to prevent, investigate and punish violence against women and provide reparation to victims. It also provides a monitoring system to evaluate its implementation.

Yet, there is one major power that Erdoğan cannot force to yield to his regime – women. An alliance of women activists is fighting against the misogynistic, patriarchal climate.

Erdoğan’s decision to withdraw from the Istanbul Convention highlights one of Turkey’s most enduring – and pressing – social problems: violence against women. Official figures for the murder rate of women in Turkey show an increase from 66 women in 2002 to 953 in 2009, an increase of 1400%. In the same year, the European Court of Human Rights (ECHR) acknowledged that there is a “climate that is conducive to domestic violence”.

Erdoğan himself is on the record saying he does not believe in equality between women and men. In his 2014 Istanbul meeting discourse he made clear that he believed “one cannot put women and men on an equal footing … It is against nature.” He has never stopped insisting that he is against gender equality.

Whatever else it says about his attitude towards women, Erdoğan’s decision to withdraw from the Istanbul Convention sets a dangerous precedent. Once we accept that a human rights treaty that is passed into domestic law by act of parliament can simply be withdrawn by presidential decree, it effectively means that Erdoğan can repeal any existing domestic legislation.

Shortly after Erdoğan announced the decision to withdraw, the Istanbul Bar Association issued a press release to the effect that the Istanbul Convention was still in force. The release noted that the convention had been ratified by a unanimous vote of parliament and emphasised that article 90 of Turkey’s Constitution put international treaties on fundamental rights and freedoms above domestic law in the “hierarchy of norms”.

Many are interpreting Erdoğan’s move as a sop to Islamists who consider the convention as an attack on family values. This would explain his move as a way of attracting further support from the Islamists and strengthening his domestic power-base ahead of a possible early election. He told members of his party during a speech in Ankara in August 2020 that: “We will not leave room for a handful of deviants who try to turn the debate into a tool of hostility to our values.”

Since Erdoğan and the AKP came to power in 2002, men killed at least 6,732 women in Turkey. Two days after the announcement of withdrawal from the Istanbul Convention, six women were murdered in 12 hours, four of whom were murdered because they wanted to end relationships.

The majority of femicides happen in spite of women’s complaints and appeals for help to the authorities. For example, Sevtap Şahin filed a complaint 60 times to the authorities before she was murdered. Likewise Ayşe Tuba Arslan brought charges against her ex-husband 23 times.

It is not uncommon for women’s deaths to be found to be suicides, only to be reopened after campaigners were able to demonstrate they were murders. This was what happened in the case of 23-year-old student Şule Çet, who was raped and thrown from the 20th floor of a high-rise building by her former boss and a male friend. Activists who campaigned with the hashtag #SuleCetIcinAdalet (Justice for Şule Çet) were able to get the case reopened and the murderers convicted and sent to prison.

Erdoğan has argued that his government has a “zero-tolerance” policy against violence against women, yet the ECHR has ruled in repeated cases that the Turkish authorities have failed to protect women’s rights to life, to live freely from torture or ill-treatment, and to be equally protected by the law and not be discriminated against.

Women continue to struggle against this misogyny and creeping authoritarianism in Turkey. Despite the pandemic and its associated restrictions, mass protests continue. The witty tweet below reads “picture of advanced democracy”. The picture illustrates how worried Erdoğan’s regime is about women’s resistance as several activists are surrounded by police with riot shields as well as eight police vans.

Women’s organisations have urged the Council of Europe to act, while some women have even filed individual lawsuits calling for the withdrawal to be annulled.

Meanwhile Erdoğan must consider that women will not cave in – more and more women are now fighting against the misogynistic climate. This is a problem for Erdoğan that won’t go away because women know that resistance means survival.