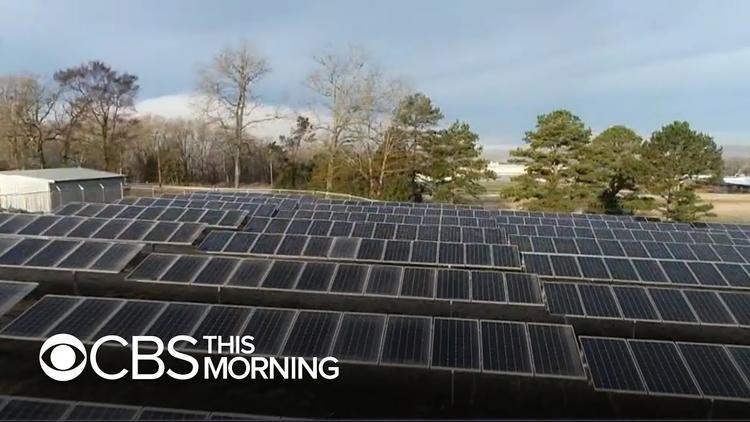 Ann Arbor (Informed Comment) – Climate Wire reported last fall on a remarkable story about the way renewable energy not only saves the earth from the destructive climate emergency but can at the same time improve our lives and those of our children.

Our hero is Michael Hester, who some years ago became the superintendent of the Batesville School district in Independence County, Arkansas. He faced the problem that his district was underfunded and the teacher pay was in the bottom quarter for the state. Teachers kept resigning because they could not live on the pay. The American custom of supporting local schools mainly with local taxes means that poor communities have poor schools, which is not right.

Back in 2017, Hester was having to pay $600,000 a year in utility bills for heat and electricity generated by coal and gas, which generate 38% and 28% of the state’s power supply respectively. Coal is the dirtiest fossil fuel, putting out enormous amounts of the heat-trapping gas carbon dioxide, which sits in the atmosphere and prevents the sun’s heat from radiating back out to space after it strikes the surface.

So Hester in 2018 partnered with Entegrity, an Arkansas-based solar company, to put 1,500 solar panels on school land, which is plentiful, and well as above the bus stops and the entrance to the school. He also had the schools made more energy efficient. (Some 25% of buildings in the US don’t even have insulation.)

Jordan Howington of the THV-11 television news station in Little Rock, Arkansas did further reporting on the story in December.

Unlike coal, gas and nuclear, which use pricey fuels, solar panels convert free sunlight into electricity. Free fuel is free. Of course, you have to pay for the panels. But they get paid off pretty quickly, and then it is all gravy. I put up solar panels on my house and my summer electricity bill in Michigan has been as little as $14 a month (and some of that is natural gas for our oven). That’s with air conditioning. So, yes, it saves a lot of money along with the planet. Those who own their own home and plan to be in it for at least 10 years are actually costing themselves money by not putting up solar panels.

Since 2018, Hester’s project has saved the school $1 million in utilities costs.

What comes next is the kicker. Hester used the savings on his district’s utility bills to give the teachers bonuses, ranging from $3,000 to as much as $15,000 a year.

He says he no longer has the problem of teachers resigning because of poor pay, and applications to teach in his district have risen.

Climatewire says Hester was surprised by how welcoming the people of Batesville were to the idea. A huge dirty coal plant is just 30 miles away. But people say they know its days are numbered, and the cost savings of solar, and they way it could increase teacher pay, came as a pleasant surprise to them. It quotes Hester as saying, “People know that that coal plant has a limited life . . . It’s a loss of revenue; it’s a loss of jobs. There’s an anxiety about that . . . So when this started showing how there are ways to help offset [those losses] and move on in alternative ways … it became a very pleasant surprise,”

7,200 schools around the U.S. use solar panels to generate some or all of their electricity. There are 130,930 K-12 schools in the U.S., we just have 123,730 to go. It seems especially cruel to use the children’s parents’ tax money to buy them lumps of coal and vapors of natural gas at high prices, and then to burn them for the kids so as to make their future lives more difficult because of the climate emergency. Let’s give our children the gift of a less challenging life with fewer megastorms or wildfires, and solarize their schools.

The Biden administration will do what it can to promote this greening of America, from which we will all reap rewards.

On Tuesday, CBS this Morning picked up Howington’s story for national coverage.

This is a great segment, and lays out clearly, without using the term, what we progressives mean by a green new deal.

If we can transition quickly to renewables, we can give everyone in America, on average, a 6% raise.

Let’s give ourselves a raise and save the planet at the same time. What could be more satisfying?