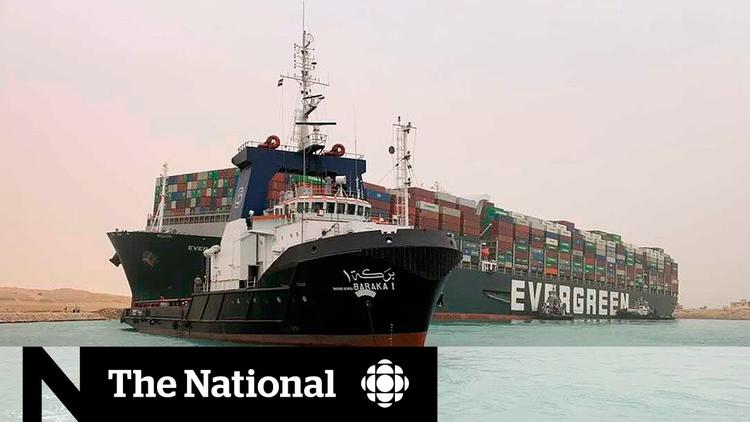 Ann Arbor (Informed Comment) – The super-super tanker Ever Given is stuck kitty-corner in the Suez Canal, having apparently run up on a sand bar. It is blocking dozens of other ships from going through the canal. The ship, one of the largest in the world, is a quarter of a mile long and can carry 20,000 containers. So far attempts to refloat the massive vessel have failed, and salvage teams are saying it could be days or even weeks before the ship can be moved.

Over fifty ships go through the canal on a typical day, some 19,000 a year. Twelve percent of global trade moves through it, including oil supertankers and ships bearing liquefied natural gas (LNG). Ten percent of the world’s petroleum moves through the canal. A third of Britain’s natural gas is imported through the canal from Qatar. If it really does take weeks to unblock this essential global waterway, it will have an impact on the prices of oil and gas, and on some other commodities. So far that impact is muted by the fourth Covid wave and the prospect of more economic lockdowns. The alternative route is for the vessels to go around the Cape of Good Hope, adding thousands of miles and a great deal of expense to the journey between Asia and Europe.

The Suez Canal was a dream through history. Anyone who ever traveled from the Mediterranean to the Red Sea overland along that route noticed how short the distance was between the two bodies of water. The ancients talked about it. Napoleon Bonaparte, who invaded Egypt in 1798, talked about it.

And the Utopian Socialists, the Saint-Simonians, members of a movement founded by social philosopher Henri de Saint-Simon (d. 1825) theorized the way the world could be unified. Many were engineers. Some went to Egypt to do public works for the Ottoman viceroy, Muhammad Ali Pasha (r. 1805-1848), and they pressed him to dig a Suez Canal. They were led by Prosper Enfantin, who had been jailed briefly in France for radical feminist views. Muhammad Ali collected too much in tolls from overland trade through Egypt to want a Suez Canal in the 1830s, but he did have the Saint-Simonian engineers work on a dam near Alexandria for him. Most left in 1836 when Egypt was hit by a plague pandemic that killed a third of Cairo’s population.

Enfantin met diplomat Ferdinand de Lesseps, the French consul in Alexandria and then Cairo, and also pressed on him the importance of a Suez Canal

The Saint-Simonians not only thought that uniting the world through infrastructure would bring world peace, they also thought that such a major set of works in Egypt would revive the country and bring back its Pharaonic grandeur. The Egyptian reformer and modernist Rifa`ah al-Tahtawi wrote in the 1860s that three great projects could bring the globe together– the Suez Canal, the Transcontinental Railroad in the US, and the Panama Canal. He appears to have mixed Saint-Simonian utopian socialism with Sufi ideas about a labor theory of value.

In the 1850s de Lesseps formed a company through subscriptions to pursue a canal, raising 200 million francs. The Ottoman Viceroys Said (d. early 1863) and Ismail (r. 1863-1879) became favorable toward the project because of their relations with Napoleon III, and permitted work to move ahead. Enormous numbers of Egyptian workers were pressed into digging, in an age before automation. They were paid a wage and fed, but the viceroys did not give them a choice of whether to do this work or not.

“Suez Canal. When Sa’id (1854-63) granted to Ferdinand de Lesseps the right to dig the canal in 1856 he also gave him the right to use Egyptian labour on the project. The Suez Canal Company was to provide food and shelter for the workers and pay them the prevailing wage; the Egyptian govern- ment was to provide the workers. Peasants were gathered in groups of 25,000 to 30,000 and sent off to dig in the desert for shifts of twenty to thirty days, after which they were replaced by a new group. 16 The tasks and conditions of Suez Canal workers prompted Yisuf Nahhas to complain: “The work of the peasants in digging the Isthmus [of Suez] clearly differed from the normal corvee; nothing remained of its elements save the coercion of workers to come to work.”

The canal was completed in 1869, and Viceroy Ismail threw a big bash at Port Said, inviting Europe’s crowned heads and other dignitaries. Giuseppe Verdi was commissioned on this occasion to compose “Aida,” set in ancient Egypt, which was performed in the new Cairo opera house in 1871. So the Saint-Simonian dream of Egyptian revival and global connectivity lived on as de Lesseps and his Egyptian partners brought the canal to fruition.

Viceroy Ismail borrowed a lot of money for infrastructural improvements and was bilked by European banks, who charged exorbitant fees and high interest. He borrowed at the height of the cotton boom of the 1860s, when the US North had blockaded the South and caused a world cotton famine that Egypt’s fertile Nile Valley helped remedy. But then the war ended and the South gradually got back to work and prices fell. Egypt had trouble with debt servicing. By 1876 Egyptians per capita were the most indebted people in the world. In 1876, Viceroy Ismail was constrained to sell the canal to the British for a song. Then in 1882 the British, who depended on the new canal to increase their control over their Indian Empire, just invaded and took over Egypt, creating what London called a “veiled protectorate.” It was a colony.

Egypt gained a sort of independence in 1922. But only in 1956 did Gamal Abdel Nasser nationalize the canal. In response, Britain connived with Israel and France to take it right back, mounting the conspiracy of the 1956 War. President Ike Eisenhower was not informed of this plan, and when he understood what was happening, he threatened to use US economic might to call in French, British and Israeli loans and crash their economies if they did not get right the hell back out of Egypt. He said he was offended that the United Nations ideal of the end of wars of aggression had been so blatantly flouted. I think he was also afraid that the aggressors would drive Egypt into the arms of the Soviets.

So Egypt got ownership of the canal in a seminal moment in post-WW II decolonization. Fears that Egypt would deny Israel use of the canal contributed to the 1967 War and Egypt crossed the canal to take back control of it in 1973.

Unfortunately, the dream of the Saint-Simonians that a global transportation infrastructure would in and of itself lead to world unity, peace and a renaissance of the global south proved unfounded. In some ways their vision has been revived by the Chinese Communist Party, with its One Belt, One Road project of united Eurasia.

But the canal is a major money earner for Egypt and it has become a major artery of world trade. It is actually too narrow at some points now, however, for the really big container ships, and that is one of the reasons the Ever Given disaster has occurred. Egypt expanded parts of the canal in 2015, but this accident happened south of that expansion.