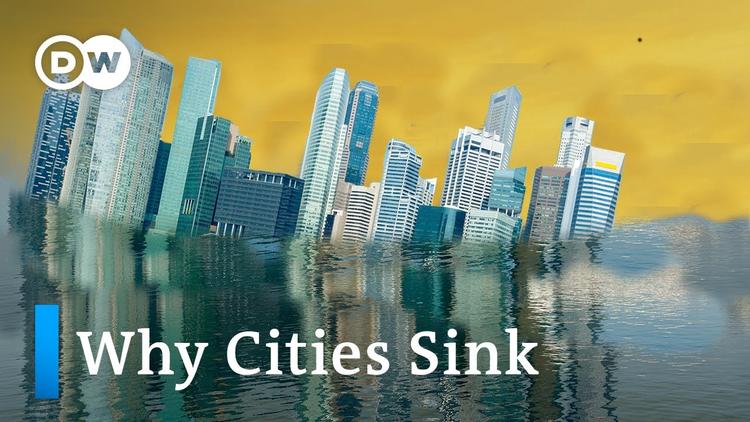 It is well known that climate-induced sea level rise is a major threat. What is less well know is the threat of sinking land. And in many of the most populated coastal areas, the land is sinking even faster than the sea is rising.

Parts of Tokyo for instance sank by 4 metres during the 20th century, with 2 metres or more of sinking reported in Shanghai, Bangkok, and New Orleans. This process is known as subsidence. Slow subsidence happens naturally in river deltas, and it can be accelerated by the extraction of groundwater, oil or gas which causes the soil to consolidate and the surface to lose elevation.

Subsidence can threaten flooding in low-lying coastal areas, much more so than rising sea levels, yet scientists are only just realising the global implications of the threat with respect to coastal cities.

In fact, while the average coastal area experiences relative sea level rise of less than 3mm per year, the average coastal resident experiences a rise of around 8mm to 10mm per year. This is because so many people live in deltas and especially cities on deltas that are subsiding. That’s the key finding of our new research, where we analysed how fast cities are sinking across the world and compared them with global subsidence data including less densely populated coastlines.

Our finding reflects that people often choose to live in river deltas, floodplains and other areas that were already prone to sinking, and in doing so will further enhance subsidence. In particular, subsiding cities contain more than 150 million people in the coastal zone – that’s roughly 20% of people in the world who live by the sea. This means relative sealevel rise will have a more sudden and more severe impact than scientists had originally thought.

Here are a few of the most affected cities:

The Indonesian capital Jakarta is home to 10 million people, and is built on low-lying land next to the sea. Groundwater extraction caused the city to sink more than three metres from 1947 to 2010 and much of the city is still sinking by 10cm or more each year.

Subsidence does not occur evenly, leading to uneven risks that make urban planning difficult. Buildings are now flooded, cracks are appearing in infrastructure which is being abandoned.

Jakarta has built higher sea walls to keep up with the subsidence. But since groundwater pumping continues, this patching-up policy can only last so long before the same problems occur again. And the city needs to keep pumping since groundwater is used for drinking water. Taking water, the very thing that humans need to survive, ultimately puts people at risk from inundation.

The battle against subsidence is slowly being lost, with the government proposing in 2019 to move the capital to a purpose-built city on the island of Borneo more than 1,000km away, with subsidence being one of many reasons.

Developing rapidly in the past few decades, and now with a population of 26 million, Shanghai is another sinker. The city has maximum subsidence rates of around 2.5cm a year. Again this is mostly caused by lowering groundwater levels, in this case thanks to drainage to construct skyscrapers, metro lines and roads (for instance Metro Line 1, built in the 1990s, caused rapid subsidence).

If no additional protection is built, by 2100 this rate of subsidence and sea level rise mean that a storm surge could flood around 15% of the city.

In New Orleans, centuries of embankments and ditches had effectively drained the city and sunk it, leaving about half of it below sea level.

When Hurricane Katrina breached the levees in 2005, the city did not stand a chance. The hurricane caused at least US$40 billion (£29 billion) in damage and particularly took its toll on the city’s African American community. More than 1,570 people died across the state of Louisiana.

If the city had not subsided, damage would have been greatly reduced and lives would have been saved. Decisions that were made many decades or more ago set the path for the disasters that are seen today, and what we will see in the future.

There are no simple solutions

So what can be done? Building a sea wall or dike is one immediate solution. This of course stops the water coming in, but remember that the sea wall is sinking too, so it has to be extra large in order to be effective in the long-term. In urban areas, engineers cannot raise ground easily: that can take decades as buildings and infrastructure are renewed. There is no simple solution, and large-scale urban subsidence is largely irreversible.

Some cities have found “solutions”. Tokyo for instance managed to stop subsidence from about 1960 onwards thanks to stronger regulations on water pumping, but it cannot get rid of the overall risk as parts of city are below sea level and depend on dikes and pumps to be habitable. Indonesia’s bold proposal to move its capital city may be the ultimate solution.

Increased urbanisation especially in deltas areas and the demand for freshwater means subsidence will remain a pressing issue in the coming decades. Dealing with subsidence is complementary to dealing with climate-induced sea level rise and both need to be addressed. A combination of rising seas and sinking lands will increasingly leave coastal cities at risk.