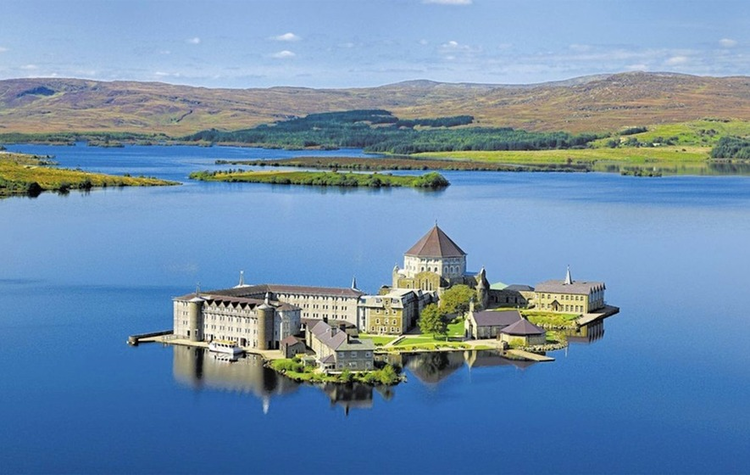 (Special to Informed Comment) – St.Patrick’s Purgatory at Lough Derg was first written about in the 11th century as one of the most rigorous pilgrimages in Europe. Our small family went there for a three-day retreat and given only bread and water while having to walk in bare feet throughout the three-day retreat.

According to an ancient legend there was a battle that Patrick had to fight against a monster that inhabited the lake. He was compelled to fight this giant lake creature so he entered naked into its great mouth with his pointed crozier and managed to slay the monster from the inside out. This is why the lake is called Lough Derg (the red lake).

Older legends maintained that St. Patrick responded to the doubts of his converts, who told him they would not accept his teachings until they had substantial proof. He went to the island of Lough Derg and on Station Islnd a large cave was revealed to him which eventually became to known as “purgatory”.

By the 12th century a basilica was built to replicate the cave, and instead of a quest for visions, the emphasis was placed on penitence. The name “purgatorium” in Latin, meant a place for cleansing and purging. The idea of “purgatory” as a place for punishment in the afterlife did not come into use until the thirteenth century, being adopted by Dante Alighieri in the early 14th century as the name for an after-life existence between heaven and hell. The famous poem was “The Divine Comedy”.

By the twelfth century pilgrims came from continental Europe, landing at Dublin or Drogheda. From those ports they made their way by foot, stopping at monasteries along the way on a fourteen day pilgrimage across the countryside. At that time many sinners and criminals were sent on pilgrimage to atone for their misdeeds and to seek forgiveness. Lough Derg was one of the chief destinations for such penitential pilgrims, since communities of anchorites (hermits) living there were believed to have special powers to absolve afflictions and sins.

The monastery on Saints Island offered hospitality to pilgrims, who visited in a spirit of penance and prayer. It also served as a place where pilgrims prepared themselves to visit the Purgatorial cell. They spent fifteen days on Saints Island, fasting and praying to prepare themselves for the visit to Station Island. At the end of the fifteen days they confessed their sins and underwent final rituals before being locked in the cave for twenty-four hours. The day following that the abbot brought the pilgrim back to Saints Island for another fifteen days.

Due to its penitential nature Irish poets, such as Seamus Heaney, attended the retreat and wrote about it in“Station Island”. This was his way of reflections on the “troubles” taking place in Northern Ireland.

That eternal fountain, hidden away, I know its haven and its secrecy …,which is all sources’ source and origin …

Lough Derg, St. Patrick’s Purgatory in Donegal, …The twentieth century blows across it now But deeply it has kept an ancient vow.

”I fasted for some forty days on bread and buttermilk…

Round Lough Derg’s holy island I went upon the stones”

By the 20th century the retreat duration had become contracted into several days and no longer required preliminary preparations. My father made two retreats to Lough Derg before coming to the decision to immigrate from Ireland to North America with his large family and seek his fortune in gold mining and working in the Arctic, although there was no fortune to be had and there was more than enough misfortune.

St. Patrick’s Purgatory at Lough Derg continues to be a place for making decisions with many thousands coming each year to pray for good results in their school exams or how best to lead their lives, whether to immigrate or not, and among the elderly, to find some degree of solace in the besetting problems of illness and age.

Each year the Lough Derg retreat season begins in late May and ends in mid-August and is open to anyone from any religious tradition with retreatants expected to be at least fifteen years of age and in good health. Our son was fourteen at the time but an exception had been made since he was accompanied by his parents.

In earlier days, as in Dante’s Purgatorio, the main purpose of going to St.Patrick’s Purgatory at Lough Derg was to overcome the vices of envy, greed, anger, indolence, lust and gluttony and aspire to the virtues of humility, generosity, charity, moderation, patience, temperance and kindness. There is little doubt that many pilgrims felt they had achieved some equanimity and peace by the time they returned home.