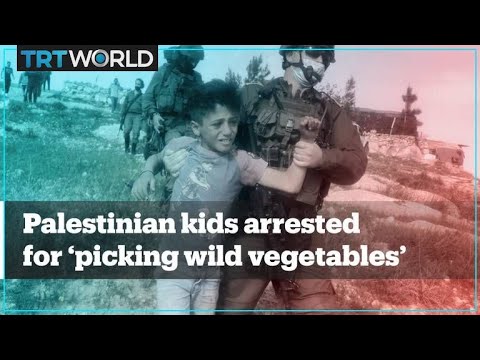 ( Middle East Monitor ) – As I was reading an article headlined “Israel says 600 children given Covid jab had no serious side effects”, my twitter feed was filled with messages expressing outrage about a video of some other children: Palestinian children.

This told a very different story. Palestinian children aged 7 to 12 were being manhandled violently by fully armed and masked Israeli soldiers equipped to arrest dangerous criminals. The images were obscene. The might of the Israeli army — the so-called Israel “Defence” Forces —being used to terrorise children simply because it can.

Pro-Israelis jumped immediately to the defence of the soldiers, claiming that the children were “stealing” private property; there was little compassion shown for the situation that the children found themselves in. In fact, the children were collecting akkub, an in-season prickly wildflower that is the main ingredient for a Palestinian casserole with the same name as the flower. Their crime, apparently, was to be on “private land” near the illegal Israeli settlement of Havat Mi’un in southern Hebron. Those who took the side of the soldiers claimed that the incident was not portrayed accurately — that the video was pure “Pallewood” — and that the children were being taken to a nearby “holding station” before being released to their parents. I wonder if they would have been as forgiving if the children had been Jews caught by soldiers of a foreign army.

The contrast between these two news reports could not be starker. In one, Israel seeks to protect Israeli children from Covid-19; in the other its soldiers terrorise Palestinian children. I want all children to be protected from harm and do not distinguish between Israeli and Palestinian children, but Israel discriminates between them on a daily basis.

Israel’s abuse, mistreatment and, indeed, shooting and killing of Palestinian minors is well documented. It is also worth reminding ourselves that the ordeal of Palestinian children does not end with their arrest; they are usually abused at every stage on the way to the military courts which not only deal with them, but also have an almost 99 per cent conviction rate. Israeli children and their families, even those who live in the illegal settlements, are subject to civil, not military law.

Behind the Israeli soldiers’ capture of the children lies another problem that Palestinians under occupation are encountering; the increasing number of attacks by illegal settlers using the “Defence Forces” as a shield. Put simply, settler violence is on the rise aided and abetted by Israeli soldiers. The most common type of attack is against something that is symbolic of the people of Palestine and an essential part of the economy: the olive tree. Not only has Israel as a state cut down more than a million olive trees in the occupied territories, but settlers also regularly cut down and burn the trees out of sheer spite and as a way of attacking the livelihood of Palestinians to push them off their land.

The illegal settlers have been emboldened by their certain belief that they will not face any consequences for harassing and attacking Palestinians and their property. They also rely on the belief that Israel considers the land it occupies to be Jewish land to which the indigenous Palestinians have no right. On two occasions recently, notorious and fully-armed Israeli settler Zvi Bar Yosef was emboldened to order Palestinian families to leave their picnic at a tranquil location. He lives in a settlement outpost called Havat Zvi which is illegal under Israeli law as well as international law; it is near the village of Jibiya. On the first occasion, he was accompanied by soldiers who ordered a Palestinian Israeli family to leave what is a public area. The fact that they were Israeli citizens made no difference to the outcome. That is what “equality” means in apartheid Israel.

Settlers regularly attack Palestinian villages during the night, daubing walls and cars with anti-Palestinian graffiti. The illegal outpost of Yitzhar is infamous as a hotbed of hate, home to young Israeli settlers who see it as their mission in life to make the lives of Palestinians as miserable as possible. Settlers from this outpost have even seen their attacks on Israeli soldiers go unpunished, when similar attacks by Palestinians would have resulted in a harsh and possibly deadly response.

It is worth remembering that settler violence has not been confined to damage to property or minor injuries to Palestinians. In 2015, Amiram Ben-Uliel, an Israeli terrorist, firebombed the Dawabsheh family home in Duma village near Nablus, killing 18-month-old Ali and burning his parents Riham and Saad so badly that their injuries were fatal. Four-year-old Ahmad survived with severe burns. Ben-Uliel had spray-painted “Revenge” and “Long Live King Messiah” on the walls of the Dawabsheh’s and another home in the village.

While the number of fatal attacks by settlers thankfully remains rare, their violence against the Palestinians is escalating. Is it coincidental that this has happened since Prime Minister Benjamin Netanyahu’s government threatened to annex vast swathes of Palestinian land last year? While the threat of de jure annexation has been suspended to allow for normalisation agreements with some Arab states, the belief remains among Israelis, especially the fanatical settlers, that all of the land between the River Jordan and the Mediterranean Sea belongs to them.

This has encouraged settlers to terrorise Palestinians in an effort to get them to abandon their homes and land. Even though I am confident that Israel and its illegal settlers will fail in that endeavour, the lives of the Palestinians on the front line of settler terrorism will continue to be difficult. If the occupying state of Israel ignores its legal obligation to protect the people under occupation, the international community shouldn’t. The latter should impose sanctions on Israel until it meets its international obligations as an occupier and impose law and order on its illegal settlers. And it should vaccinate vulnerable Palestinian children while it is at it.