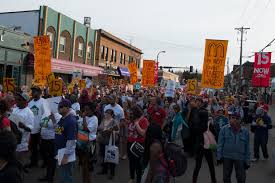 Southwest Harbor, Maine (Special to Informed Comment) – Conservatives in both political parties want citizens to believe opposition to an increase in the minimum wage is a simple matter of supply and demand economics. If government regulators increase the price of hamburger, consumers will buy less hamamburger. Increase the price (wages) of labor and businesses will hire fewer workers.

They hold that if you want to keep the economy at or near full employment, government should leave the market alone and let it set wage levels for skilled and unskilled workers. There is however, one big problem. Supply and demand don’t work in the smooth way the textbooks portray, and no market could endure without plenty of regulation and support.

In theory the market price of unskilled labor is a reflection of its productivity. Since wages of unskilled workers in inflation-adjusted terms are less than in the late sixties one would infer the counterfactual conclusion that there has been no increase in labor productivity for more than a generation. This statistic alone should make us suspicious about simplistic market models. James K. Galbraith of the University of Texas challenges these models:

“the proposition that with a higher average wage, fewer people necessarily will be employed. This is a textbook verity, often repeated, and beloved by business lobbies. But it is eminently doubtful in the real world. The real world is shot through with high unemployment in low-wage regions and fuller employment in high-wage regions,

Why this is the case might be more clear if we consider the difference between a market for hamburgers and a market for hamburger flippers. Hamburgers do not alter their aspirations or actions in response to movements in their sale price. An increase in wages is a cost to business owners but also a possible if indeterminate source of future expenditures for their products. In the real world at the same time burger flippers’ wages go up, public health groups issue new reports about the health effects of beef, advertisers find new ways to glamorize their product, whole sale beef prices respond to an unexpected reduction in the herd of beef cattle.

In such a scenario multiple supply and demand factors operate in intersecting markets. Periodic patterns and regularities emerge, but these also are vulnerable to internal tensions and surprises. Long lasting and fully predictable equilibria are a myth. Prices are often imposed via tacit or explicit interaction of collaboration among economic oligarchs, legal requirements, tax policy,, price leadership by the big players, contracts.

In the quarter century following WWII this combination was often challenged and partially checked by another combination, the large industrial unions. John Kenneth Galbraith’s countervailing powers helped assure steady increases in wage and benefits equal to gains in worker productivity. Periodically increased and inflation adjusted minimum wage standards were one essential part of the system of countervailing powers.

As it is, the weakening and undermining of unions, tax policy, urban and suburban planning and minimum wage standards no longer adjusted for inflation have left an obscene gap between worker productivity and poor and working class wages and benefits. Julie Hollar, Extra’s managing editor, cites Dean Baker’s finding that: “ if the minimum wage had kept pace with gains in productivity—as it did from 1938 through 1968—it would today not be $15 an hour, but $24. ” For African Americans the gap is even worse.

A more generous minimum wage is only one tool allowing us to work toward a more just society but it is important. It is widely popular, even receiving support from a large minority of Republicans. With worker productivity in many sectors far in excess of current wages there is ample space for the infusion of purchasing power.

Furthermore lifting their wages helps overcome ugly stereotypes about the poor. Higher wages also press management to have more regard for the long- term development of their workers, whose own self-esteem is enhanced in the process. Most importantly a livable wage enables more opportunity to participate in the political and economic issues of the day

In addition to deflating the simplistic claims of its opponents progressives might well address the moral failings of market fundamentalism. Its advocates tout it as an absolute when the subject is regulations on behalf of social justice even as their businesses often quietly rely on government.

Here is one progressive entrepreneur’s reaction to the hypocrisy—“I may be old fashioned, but I believe that I should not be relying on government subsidies to stay in business. If I am paying my employees at a level where they are relying on food stamps to eat and Section 8 for housing, the government is picking up the tab on my substandard wages. That’s not an ethical business; that’s stealing from the taxpayers”.

In the post WWII era, wage growth was translated into consumerism, but this was a collective social choice, not merely a product of market forces. Political culture and climate catastrophe will demand other choices today if we are to fashion compelling visions of countervailing powers.

Worker productivity gains might occasion more interest in expanded leisure time and/or a larger voice in workplace decisions. If periodic or regional bouts of unemployment may be inevitable in dynamic market systems maybe it is time to talk about a new safety net, the guarantee of a living wage job.