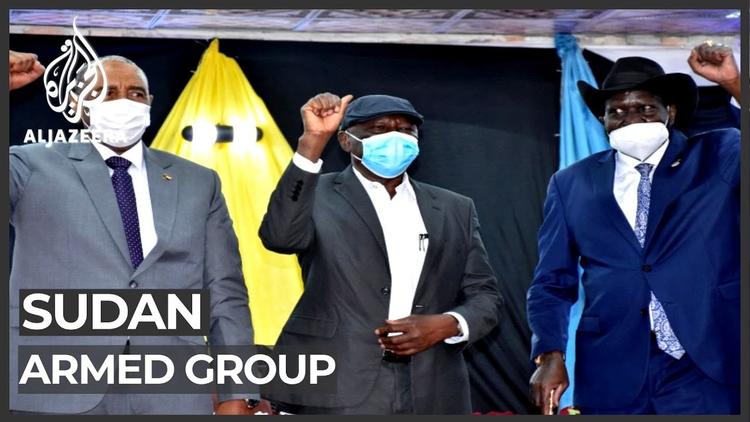 Ann Arbor (Informed Comment) – The Sudan Tribune reports that Sudan cemented the separation of religion and state on Sunday. Military leader Abdel Fattah al-Burhan signed a declaration of principles with one of two remaining rebel groups who had not yet put down their arms and accepted the new transitional government. The group is the Sudan People’s Liberation Movement – North, headed by Abdelaziz al-Hilu. The agreement was signed in Juba, South Sudan at a meeting hosted by the president of that country, Salva Kiir.

The agreement specified that Sudan would have a lay, federal government that would guarantee freedom of religion and worship, saying that it would be achieved “through the separation from the state of cultural, ethnic, religious and local identities; such that the state shall impose no religion on any person nor adopt an official religion, and such that the state will be neutral with regard to religious and doctrinal affairs and matters of conscience.”

Fighting between the old dictatorship of Omar al-Bashir and the southern guerillas had displaced an estimated 400,000 Sudanese in the past decade.

Obviously, the phraseology echoes the US First Amendment as well as the preceding Thomas Jefferson and James Madison’s statute on religious freedom in Virginia. I think Americans are often not sufficiently aware of how inspirational their constitution has been for people around the world. The Sudanese have suffered under fundamentalist dictatorship for decades and are as tired of the Muslim Brotherhood and the Salafis as Madison and Jefferson were of the official Anglicans.

Al-Burhan is the leader of the military Sovereignty Council that forms one half of the transitional government. The other half is made up of civilian revolutionaries, including prime minister Abdalla Hamdok, who signed a similar document last fall. The officer corps had been tied to Muslim fundamentalism in recent decades.

Al-Burhan said that the signing was the true beginning for the transitional government of the achievement of real change that would lead to a just peace and would create a state of its citizens, along liberty, and justice. These are the slogans chanted by the revolutionaries in March, 2019, when they overthrew fundamentalist dictator Omar al-Bashir.

Al-Burhan emphasized that the transitional government is determined to achieve the change that the people want and for which they sacrificed, even those who took up arms, and all those who dream of a dignified life. He vowed that a Sudan would be founded on the principles of equality for coming generations, wherein all Sudanese would be proud of a nation in which there was no discrimination between north and south, nor based on religion or ethnicity.

Al-Hilu for his part praised the declaration of principles as the step toward more wide-ranging negotiations toward a democratic Sudan that would respect human rights. In the past four decades the country has been wracked by regional and ethnic violence and even genocide.

Al-Hilu praised al-Burhan for this “bold step” that could lead to the attainment of a permanent peace and a just unity. He considered the signing of the principles by the cabinet, as well, asa sign that there was a will both in the civilian and military wings of the transitional government to perfect the peace.

The agreement also envisages that the guerrillas of the SPLM-N would be made part of the regular Sudanese army.

The declaration of principles was hailed by several Sudanese political parties, including the left-leaning Sudanese Professionals Association that had spearheaded the 2019 revolution.

Despite the confusing title, the guerrilla group represents the provinces of Kordofan and Blue Nile in the southern Sudan, which have substantial Christian and animist populations. Most Sudanese are Muslim. Since the old far southern provinces seceded as South Sudan in 2011, the southern provinces that remained under Khartoum’s rule were now the northern part of the south.

Al-Hilu is a fierce proponent of the separation of religion and state and in 2017 established a breakaway faction of the SPLM-N under his leadership that insisted on this principle. Al-Hilu was a disciple of John Garang, the socialist revolutionary who fought for greater southern autonomy. The southern Sudanese guerrilla group he led was more grounded in a desire for “states’ rights” than in a particular ideology, but Garang was a secular socialist of the twentieth-century sort, and al-Hilu, despite being of Muslim heritage, took up these ideals, as well.

After its revolution, Sudan has a hybrid transitional government with a military junta co-existing with a civilian government made up of prominent revolutionaries who ousted Muslim fundamentalist dictator Omar al-Bashir.

Sudan’s officer corps had backed al-Bashir, even after he was charged with crimes against humanity, and had long tilted toward religious fundamentalism. The officers, however, came to terms with the mass mobilization that ousted him. After all, you can’t take hundreds of thousands of people out and shoot them. Al-Burhan’s willingness to sign this document may indicate a major shift of thinking among the officers in favor of the separation of religion and state. After all, Sudan is a multicultural society and al-Bashir caused endless trouble, and the break-up of the country, by trying to impose sharia or Muslim canon law, as the law of the state.