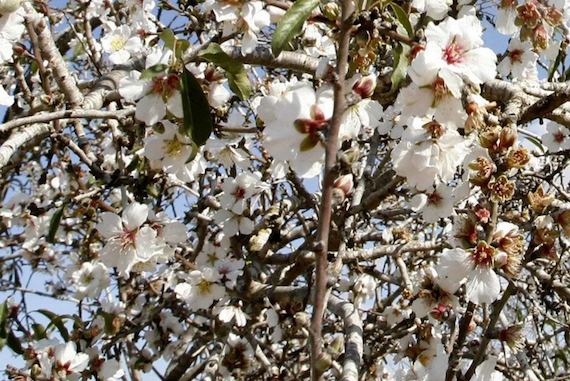 ( Middle East Monitor) – As we headed to the east of Deir AlBalah, a town in the middle of the Gaza Strip, I was shocked to see barren land. The area was once home to thousands of almond trees that dotted the landscape but farmers have been forced to uproot their trees and those who haven’t done so have seen theirs damaged by the occupation.

Palestine is known for its olive trees, its symbol of steadfastness, the oil from which is exported the world over. However, its vital almond trees have failed to make themselves known on a global scale. The beauty of the almond tree is that it doesn’t need fertilizers or much care and yet grows to a lofty ten metres high and bears fruit from its third year.

If a writer were to compose a successful piece

describing the almond blossom, the fog would rise

from the hills, and people, all the people, would say:

These are the words of our national anthem.

Adding value to the trees’ value to Palestinian patriotism and resistance.

Husam Abu Sa’da, head of the Khan Younis agriculture governorate, says that in spite of this, almond trees risk extinction because of the occupation authorities’ abuse of groundwater supplies. This has led to purer groundwater being replenished with sea water which is salty and damaging. According to UN estimates, 96 per cent of drinking water in Gaza is contaminated with sewage and sea water.

Israeli occupation forces also force farmers to uproot trees located near the Gaza-Israel fence, claiming they are a security risk. According to the Ministry of Agriculture, the occupation forces have uprooted hundreds of historic almond trees since the occupation of Gaza. In addition to this, the occupation sprays toxic chemicals on vast tracts of agricultural lands planted by Palestinians in Gaza in an effort to damage crops.

The almond trees, which are at risk, have been passed down through the generations. Some 25,000 dunams (25 square kilometres) of land was once cultivated with almond trees. It was a stable garnish of Palestinian dishes and people would chit chat with dried almonds as snacks. Children would compete to see who could crack an almond shell but keep the nut whole.

They grew so well in Palestine that when asked how they are, locals would reply “almond!”. It was a sign of goodness, health, greatness. No longer. Now, only 800 dunams (0.8 square kilometres) are cultivated.

Almonds have four seasons; one for flowering, another that sees them turn green and two ripe almond seasons including when they are dry.

The beautiful almond blossom is one of the first indications that spring has arrived. The flowers last from two to three weeks. Once the flower petals fall, the fruits appear and take a few more weeks to ripen into green almond shells. These are sold on every street corner and are consumed heavily during their short season. The green almonds are eaten whole, with their shell, providing a real crisp bite.

The fruit then begins to harden, no longer edible, it continues to grow until the almond pulp transforms from a white bag filled with tasteless water to a white nut. The outer part is broken and the core is consumed. Before the 1948 Nakba, almonds were sold at this stage on carts in Jaffa and Haifa, in Nablus and in Jerusalem and across all Palestinian cities.

After the almond dries, the green outer shell cracks and turns into a brown dry colour leaving the hard, woody part, which contains the almond kernel. It is often eaten with honey or to garnish sweet and savoury Palestinian dishes including qatayef in Ramadan because there are no walnut trees or pistachios, but almonds are readily available. But for how long?