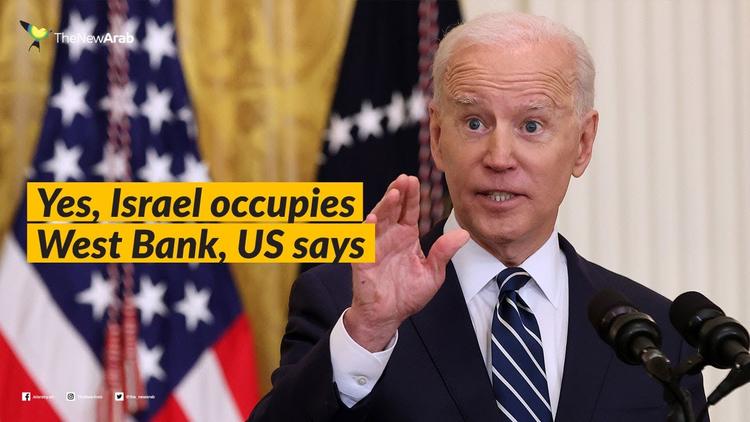 ( Middle East Monitor) – In another move that shows US President Joe Biden is navigating between the Trump administration’s era and the return to the two-state politics, the US State Department’s 2020 Country Reports on Human Rights presented two facets of the current administration’s policy.

The title reads, as it did during former US President Donald Trump’s tenure, “Israel, West Bank and Gaza“. In the text, the report acknowledges that the lands have bene occupied since 1967, with a disclaimer: “Language in this report is not meant to convey a position on any final status issues to be negotiated between the parties to the conflict, including the specific boundaries of Israeli sovereignty in Jerusalem, or the borders between Israel and any future Palestinian state.”

Acting State Department Official Lisa Peterson said that the choice to assign geographical names was for clarity. “That’s in line with our practices generally. We also believe it is clearer and more useful for readers seeking information on human rights in those specific areas.”

Using the term “occupation” while assigning fragmentation to the title is the Biden sdministration’s way of hovering between two disastrous policies. Israeli media have not taken too kindly to the US reverting to “occupation” to describe Israel’s settler-colonial enterprise, while the clarification on remaining purportedly neutral to any “final status issues” has been quoted as the report’s saving grace, for Israel, of course.

While the harm caused to Palestinians through using the term “occupation” cannot be solely attributed to Biden, the US, which hails itself a beacon of human rights, persists in promoting Israel’s annihilation of Palestine’s past.

If geographical clarity is the excuse the State Department has used to justify the title pertaining to colonised Palestine, why is there a discrepancy between the title and the content? Furthermore, if clarity is the desired outcome, how do Israel, the West Bank and Gaza clarify Palestine’s past?

US State Department Spokesman Ned Price clarified the current US position. “Our ultimate goal here is to facilitate – to help bring about – a two-state solution because it is the best path to preserve Israel’s identity as a Jewish and democratic state while bestowing on the Palestinians their legitimate aspirations of sovereignty and dignity in a state of their own.”

Only the two-state paradigm merely fulfils the first premise at the expense of Palestinians losing their land and independence. The US State Department report’s language is another example of how Palestinian loss is affirmed, building upon earlier land appropriation as legitimised and normalised by the UN. To the point that the destroyed Palestinian towns and villages are now merely projects of historical memory significance, rather than evidence of the Palestinian right to land.

Language plays an important part that is disregarded by many. Decades of denying Palestinians their right to liberate their land has resulted in inaccurate depictions of Palestinian territory and the debate is now simplified to using Trump’s designation or the standard term upon which there is international consensus. But Palestine is almost lost, and triumph or indignation about the title used by the US State Department and the clarification in the report gloss over the colonial reality that has barred Palestinians from their land and geographical accuracy.