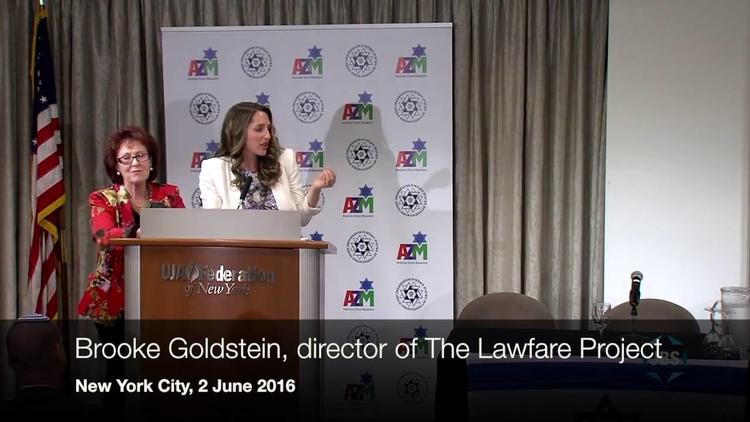 ( Middle East Monitor) – “This is the real apartheid,” Jewish American lawyer Brooke Goldstein tweeted last week. “The fact that Jews can’t enter into ‘Palestinian territory’,” she claimed, “I reject that some places are dangerous for me to enter because I AM A JEW.”

Goldstein accompanied her tweet with a photo of a large red sign in the West Bank that reads (in Hebrew, Arabic and English): “This road leads to Palestinian village [sic] the entrance for Israeli citizens is dangerous.”

But Goldstein, even aside from her egregious conflation of Jews with Israelis, left out one vital fact – the sign was made by Israel, not by Palestinians. In doing so, she misrepresented Palestinians as being guilty of “Jew hatred”.

It is Israel’s apartheid regime that dictates who can go where in the West Bank. It is Israel’s dictatorial system of military checkpoints, army bases and elaborate pass system that decrees who can move, where and why.

It received what young people call “a ratio”. In other words, it received far more replies (1,100 at this time of writing) than “likes” (378) or retweets (only 145). The replies and quote-tweets are almost all critical and derisive, and some of them quite hilarious.

This is an Israeli sign. Israel mandates this, not Palestinians.

It's also pathetic that your issue is that you can't freely traipse around the bantustan rather than its existence in the first place. https://t.co/36QEgILUa5

This is the real apartheid. The fact that Jews can’t enter into “Palestinian territory”. I reject this. I reject that some places are dangerous for me to enter because I AM A JEW. Enough with this hate. #EndJewHatred pic.twitter.com/gL3Ennf3AE

These red signs are a common sight around the West Bank. Anyone who has travelled there has seen them while entering larger built-up Palestinian areas.

But such exclusions are a consequence of the racism of the Israeli apartheid regime, and not some imagined, endemic Palestinian anti-Semitism. The Israeli army began putting the signs up around the year 2006, the time I was living in the West Bank.

These signs are not unique in the history of racist and colonial separatism. It is widely remembered that in the Jim Crow South in the US (before the civil rights movement won its most decisive victories in the 1960s) and in apartheid-era South Africa, those regimes engaged in what is sometimes termed “petty apartheid”.

They put up signs and other infrastructure designating many public spaces for “Whites only” or “Europeans only”. Black people were famously denied access to public water fountains, and even diners and other businesses.

Thanks Winstanley for your stand with justice and the rights of Palestinian people against Israeli apartheid. Hope others will join you in this path. 💪❤️🌷

But the natural corollary of the racist “Whites only” signs were accompanying “Blacks only” or “Coloured only” signs, also put in place by those same white supremacist regimes. In a very similar fashion, the Israeli apartheid regime erects these red signs as a way to keep Palestinians “in their place”.

They are not so much intended to keep Israelis – and certainly not Jews – out of Palestinian areas of the West Bank. Rather, they aim to enforce the European ideology of racial separatism, denying equal humanity to indigenous “non-white” people.

The goal is to enforce something that in the Jim Crow South was spun as “separate but equal”. Of course, in reality, it was anything but equal. African Americans were systematically kept in the most appalling poverty, in a very similar way to how apartheid South Africa kept the Black African majority in systemic poverty.

The Israeli apartheid regime denies Palestinians equal access to schools, funding, infrastructure and other normal functions of the state, compared to the generous investments it makes in Jewish Israeli communities. This applies to Palestinians who are allegedly “citizens” of Israel, before you even get into the issue of the occupied West Bank, which is a pure dictatorship dominated by the Israeli military, in which Palestinians have zero rights.

Understanding this ideology, you can begin to see why many of the people mocking Goldstein for being stupid may have been slightly missing the point, even though it’s absolutely correct and right that she should be mocked.

Goldstein did not make a simple misunderstanding. Neither is it likely that she was unaware of the fact that it is Israel who puts up these red signs. It’s far more plausible that she was deliberately lying as a way to deflect attention from the increasingly mainstream acceptance of the fact that Israel is an apartheid regime. That’s why she claimed that the sign is the “real apartheid”.

Goldstein is not just a random clueless blue tick on Twitter, you see. She is a committed anti-Palestinian . . . dedicated to campaigning hard for the enforcement of Israel’s apartheid regime – and even to punish and harass supporters of Palestinian rights around the world.

She runs a Zionist organization called the Lawfare Project, dedicated to attacking Palestinians and their supporters in the US and around the world using spurious lawsuits.

She even once claimed: “There’s no such thing as a Palestinian person.”

So Goldstein’s false claim of Palestinian anti-Semitism was a typical case of projection in which the racist assumes that everyone else – especially their victims – shares their racist views.