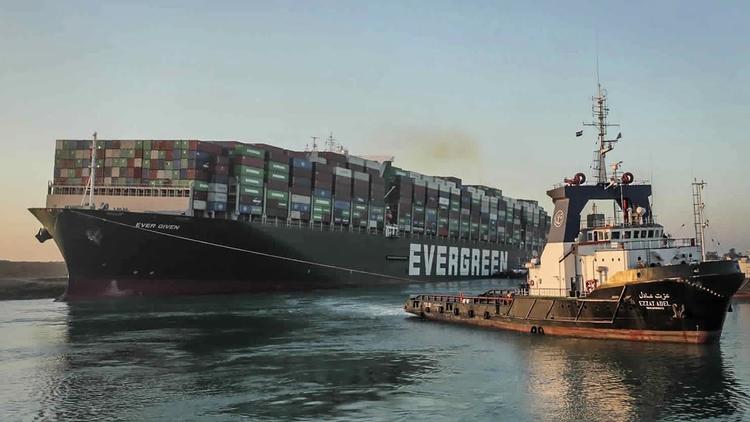 Southwest Harbor, Maine (Special to Informed Comment) – News media, maritime experts, and a curious public could hardly take their eyes off the Ever Given, the mega cargo ship as long as the Empire State Building is tall. Viewers were stunned to see the ship swung sideways to the canal and thus blocking transit in either direction. Though the physical facts of this story are impressive the larger and more enduring theme may well be that the Ever Given lies at the intersection of some key trends of contemporary global capitalism.

The megaship clogging the Suez Canal for nearly a week reminded a Covid – weary world of the global supply chains on which so much of our manufacturing and commerce depends. Scrutiny of the supply chains upon which we depend is a healthy development, but by itself it is inadequate. Globalization via today’s institutions and practices is vastly different from 19th century globalization. Today’s maritime activity depends on and helps make possible capitalism’s past and its future.

The new includes a faith in design and engineering that can allow ever bigger and more efficient ships to traverse the seas. Ever Given has a capacity that when fully loaded accommodates four times the volume of state of the art vessels two decades ago,

As for its debts to old capitalism brutal past, Longshoreman Justin Hirsch, writing in Labor Notes, points out: “20 or so years ago, there were dozens of different independent ocean carriers, or “steamship lines,” plying the world’s oceans. Today there are far fewer; independent lines consolidated and gobbled up their rival…s.

Three alliances of the world’s largest ocean carriers (2M, THE Alliance, and Ocean Alliance) now dominate the industry, carrying more than 80 percent of the world’s cargo.”

Markets in which three players are heavily dominant will have inordinate impact upon the rates they are able to charge, wages, and political influence, especially when in dialogue with developing states,

Labor too badly suffers under these conditions. Hirsch adds, ”If it wasn’t for the International Transport Workers Federation, few people ashore would ever know about the mistreatment of crews—unpaid wages, long hours of work and isolation, abandonment, and the crew change crisis, in which seafarers are forced to work long after their individual contracts end, without the option to return home.” (The Ever Gone crew was just 25 sailors.)

Despite the dangers and difficulties associated with fossil fuel powered maritime freight world commerce still relies heavily on it. It has always struck me as counterintuitive that large manufactured good or massive volumes of agriculture commodities can be shipped round the globe and still be cost competitive. Part of the answer is the amount of government subsidy the industry receives, much of which is not apparent to the casual student of budgets. Those budgetary tricks include below- market –interest- rate loans, Federal Reserve purchase of petro company bonds, free or reduced price access to public lands, assumption of the social costs caused by the whole cycle of fossil fuel use. The totals are staggering. Political economists Neil McCulloch and Radek Stephanski point out:” . Despite an

The volume of global maritime commerce is driven by exploitation of the sailors who do the work and exacerbation of the global climate crisis. Thus the case for advocacy of more local supply chains becomes even stronger than the terrifying sight of a mega cargo ship grounded in the Suez Canal. Even if ships like this or even larger are more carbon efficient on a per container basis owners will have a strong incentive to do all in their power to fill these ever larger ships. Policy makers should not be encouraging or enabling trade that has so many negative consequences.

CBC: “How small tugboats helped free the MV Ever Given from the Suez Canal”