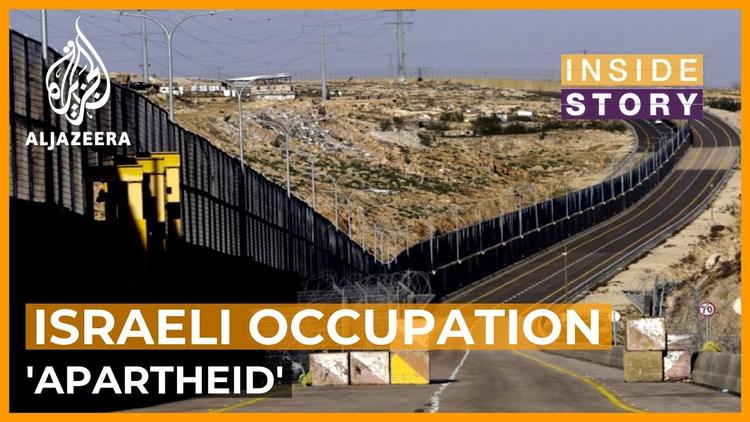 ( Middle East Monitor) – The Palestinians mentioned apartheid in connection with Israel long before B’Tselem used the description. Now it is the turn of Human Rights Watch (HRW) to — rightfully, if belatedly — accuse Israel of apartheid in its latest report titled A Threshold Crossed: Israeli Authorities and the Crimes of Apartheid and Persecution. Also belated, but still welcome, is HRW’s recognition that the “temporary” nature of Israel’s military occupation of Palestine is no longer an accurate depiction of an ongoing colonisation process that the international community has done nothing to halt.

HRW says that its apartheid definition comes not from comparisons with South Africa, but is based upon the systematic violence of demographic change, oppression and control of the Palestinian people. “When these three elements occur together, they amount to the crime of apartheid.”

A US State Department spokesperson said that the Biden administration rejects HRW’s report. “It is not the view of this administration that Israel’s actions constitute apartheid,” it announced, not surprisingly. The department no doubt wishes to shield its client state from the very serious apartheid allegation, and itself from equally serious complicity charges.

Israel, of course, is none too pleased at the renewed scrutiny of its policies and actions. With a pending investigation by the International Criminal Court which Prime Minister Benjamin Netanyahu has rejected, and B’Tselem’s January accusations of apartheid coming from within, so to speak, the democratic façade which has served the colonial state so well with the international community has been dented.

How far reaching the impact will be remains to be seen. The duality of calling Israel an apartheid state while emphasising its legitimacy is a contradiction that bolsters the settler-colonial entity’s policies and practices. The same goes for the two-state compromise, which has facilitated Israel’s apartheid by placing the burden upon the Palestinians to make concessions to their coloniser.

Predictably, Israel’s Foreign Ministry accused HRW of an anti-Israel agenda, the same allegation levelled at the UN and its institutions despite the fact that the international organisation has played a major role in enabling the Zionist colonisation of Palestine. “The fictional claims that HRW concocted are both preposterous and false,” bleated the ministry.

To call HRW out for having an anti-Israel agenda is absurd. Many human rights organisations, HRW included, have routinely given Israel the benefit of the doubt in the past, shifting the onus of blame upon Palestinians and using terminology such as “conflict” to evade the reality of settler-colonialism and related violence by a nuclear-armed state against a largely civilian population. Israel’s “security” and “self-defence” narrative, after all, is so widely promoted by the UN and world leaders, that it is basically exempt from criticism. Moreover, the Israeli narrative has shielded it from accusations of war crimes and apartheid for decades, due to the international community’s insistence on the Zionist state’s “legitimacy”, despite its contempt for international laws, conventions and institutions.

US President Joe Biden’s approach to Israel’s apartheid practices speaks volumes about Washington’s insincere rhetoric about Palestinians enjoying equal rights with Israelis. It was only a few weeks ago that Secretary of State Antony Blinken urged this to be rectified, within the context of the two-state paradigm which has contributed to the entrenching of Israel’s apartheid system.

The joint US-Israeli expectation is that Israel will continue to commit apartheid and other crimes while the international community normalises and accepts them. Considering the military aid that Israel receives from the US — $3 billion every year — it is clear that Biden and his successors will need to alter US legislation, which precludes American aid going to countries guilty of human rights abuses, rather than admit that Israel is, indeed, an apartheid state.

Will Israel be held accountable for ‘apartheid’ of Palestinians? | Inside Story