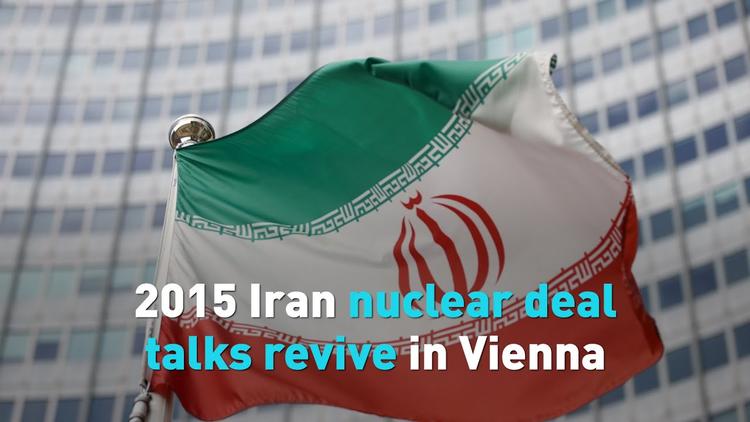 Ann Arbor (Informed Comment) – The current signatories to the 2015 Iran nuclear deal (Joint Plan of Comprehensive Action or JCPOA) met in Vienna Tuesday with Iran. The United States delegation, led by Robert Malley, met on the sidelines with Deputy Secretary-General European Union Enrique Mora, who engaged in shuttle diplomacy between Iran and the US.

It was decided that Mora would continue his efforts on Friday, when the signatories will meet again, with Malley again on the sidelines. The 2015 treaty was signed by the permanent members of the UN Security Council (China, Britain, France and Russia) plus Germany as an informal representative of the European Union, along with the US, which subsequently violated the treaty under Trump.

Two working groups will be established by the P4 + 1, one to examine which sanctions the US needs to lift first and the other to rank Iran’s possible steps back toward full compliance with its treaty obligations. Iran had scrupulously observed the JCPOA from 2015 until 2019, but from that year began departing from compliance (in relatively minor ways, it has to be said). Iran mothballed 80% of its civilian nuclear enrichment program in return for an end to economic sanctions and isolation, but the US never allowed other companies or countries to invest in or do major business with Iran, so Tehran never received any quid for its quo.

The Russian delegate to the meeting, Mikhail Ulyanov, head of non-proliferation at the foreign ministry, called Tuesday’s talks “fruitful.”

The US signed under President Barack Obama in 2015 but in May, 2018, the odious Trump abruptly breached the treaty and imposed an economic and financial blockade more severe than any country has ever applied to another in peace time. The US destroyed the Iranian economy, killing the middle class, greatly increasing poverty and sickness among civilians, and reducing oil exports from 2.5 million barrels a day to a few hundred thousand. Iran was treated this way even though it complied with its JCPOA obligations. Trump even declared Iran’s National Bank a terrorist organization, making it impossible so much as to send charity to Iran (much less purchase goods) without risking being charged for material aid to terrorism. The latter move has harmed Iran’s health system, access to medicine, and covid-19 response.

Iranian nuclear negotiator for the ministry of foreign affairs, Abbas Araghchi, took a different view of the talks from that of the other signatories, and certainly from Mr. Malley.

In remarks on Press TV reported by the Mehr News Agency, Araghchi said, “The talks are moving forward on the right path. But for now, it’s early to talk about the success of these talks. However, we are hopeful and are acting according to our own policies and procedures, and if the other side can meet our requests, that is where we can deem these negotiations successful.” He called the first day “constructive.”

He went on, however, to belie some of this cautious optimism. He said that from Iran’s point of view, it was not negotiating with the US, even indirectly, only talking to the P4 +1 signatories. If the latter wanted to talk to the US, that was their business.

He insisted that the US had to lift its economic blockade and sanctions on Iran all at once and completely before Iran would take steps to come back into compliance. That has been Iran’s position ever since the Biden administration came into office, and it has been rejected by Washington. My suspicion is that Iran will soften this all-or-nothing approach, or there was no point in even attending the Vienna summit, since its entire purpose is to come up with gradual and step-wise moves each side can take to climb down from their current maximal positions.

In an interview with NPR’s Steve Inskeep, Lisa Weiner, Denise Couture and James Doubek, Mr. Malley called the Iranian position that Trump’s financial and economic blockade is illegal and must be lifted before Iran would begin taking compliance steps “not serious.” He said, “it’s not going to work that way.”

Araghchi fired back, “Mr. Malley’s remarks show the lack of seriousness on the part of the other side, because they were the ones who left the JCPOA and imposed sanctions on Iran. Even now, it is obvious that they must lift all these sanctions in one step, and this is a completely logical request from the Islamic Republic of Iran.”

I have to say that Araghchi seems to me to have a point. You can’t sign a treaty with a country, but then decline to lift sanctions as you promised to, then tear the treaty up and go full bore with an economic blockade, and then say the other country isn’t serious.

It is like shaking on a truce with a guy in a bar, and then going martial arts on him and beating him to within an inch of his life, and keeping the beating going. And so he pulls out a knife. You say he has to drop the knife or you won’t stop beating him. He says, no, you stop beating him and then he’ll put it away. You say, you’re not serious, as you land another blow.

The Biden team was wrong to keep the odious Trump’s “maximum pressure” measures in place on coming to power. It is in fact not clear that they are legal in international law. If they had just lifted the ban on dealing with the National Bank and stopped interfering with ordinary Iranian commerce such as oil sales, there still would have been plenty of sanctions in place that would have been perfectly good bargaining chips.

Malley admitted all this to NPR:

“Listen, we’ve had a real life experiment with this. The last three years the Trump administration tested the proposition that putting Iran under maximum pressure and telling it either it needs to come back and forget about the existing nuclear deal and agree to more stringent requirements, or else the pressure would continue.

So if this Trump financial and economic blockade failed, why keep it in place? it is illogical.

Also, the US side exaggerates the degree to which Iran is out of compliance with the JCPOA. It hasn’t militarized its civilian nuclear enrichment program in any way. It has deployed a few more centrifuges than was permitted (and better centrifuges).

What is going on here is that the 2015 JCPOA was formulated to extend Iran’s breakout time (the time it would take to produce a nuclear bomb if it abruptly decided to do so) to a year or more. Iran has been bringing that time back down to maybe six months. Iran is saying, we’ll go back to a twelve-month breakout time if you stop going all Derek Chauvin on us. So far, the US is saying, the knee stays on the neck.