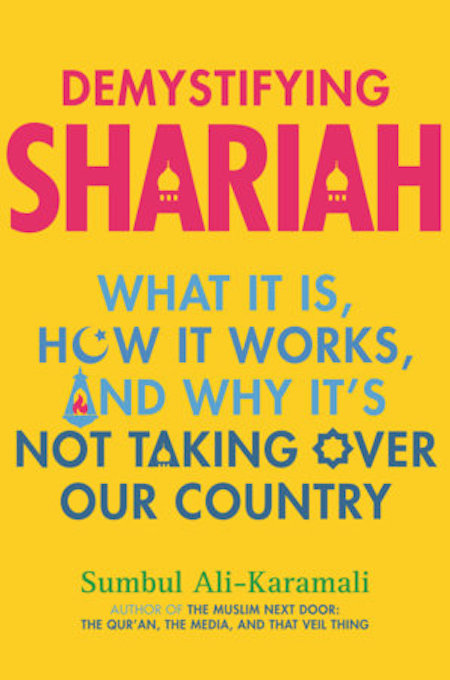 (Special to Informed Comment) – When I first read Jack Shaheen’s seminal book, Reel Bad Arabs, which documents negative stereotypes of Muslims and Arabs in American film, I was shocked. Not shocked that such stereotypes have saturated film and television. Rather, shocked that I myself had seen several of these films and never noticed the stereotypes! And I am Muslim! How could I have missed them? Easy: stereotypes of Muslims are so normalized in American and European historical, news, entertainment, and educational narratives that most of us, even Muslims, don’t notice them.

Anti-Muslim prejudice, commonly called Islamophobia or anti-Muslim racism, is like any other racism, some of which we as a nation are finally addressing. Racisms are not biological classifications but sociopolitical constructs, defined as prejudice against a group of people for no reason other than their membership in the group. For example, in nineteenth-century America, Christian Syrians were legally classified as white but Muslim Syrians as nonwhite![1] Whiteness included more legal privileges. Non-Muslims today have been attacked because they “look” Muslim, though Muslimness is a state of belief, not appearance.

Demystifying Shariah: What it is, how it works and why it’s not taking over our country [Click here to buy]

I’ve always thought that the Muslim American experience encompassed elements of both the Black American and the Jewish American experiences. Most Muslims are people of color, and we are a misunderstood religious group. Yet, Muslims have not been typically included in Diversity, Equity &amp; Inclusion narratives. This is because we’re still the bad guys in the public discourse. But why?

Stereotypes of Muslims long predate 9/11. They come from 1,400 years of Western European views of Islam as the enemy. The modern Islamophobia industry – a well-documented, loose network of individuals and organizations profiting from disseminating fear and misinformation about Muslims – is simply the newest vehicle in a Western historical tradition that has always perceived Muslims through the lens of fear and hostility.

When Islam was born, in the seventh century, Christian Europeans viewed it as a false religion – all religions consider subsequent religions to be false religions or cults – and viewed Muhammad as Satan, the anti-Christ, a false prophet, a lecher, an epileptic, and all manner of other monster. Europeans didn’t personally know Muslims, who were geographically distant, and they knew little of what Muslims believed. As a result, an entire body of continually expanding mythology about Islam and Muhammad developed in Europe, to which successive generations added new tall tales to the old tall tales. It was a closed system of European myths unaffected by facts; even eyewitness accounts from visitors to Muslim lands failed to penetrate it.

Muslims may have disagreed and clashed militarily with Christians, but they didn’t harbor the same sorts of tall tales about them, because they knew Jews and Christians personally. Muhammad had Christian relatives and Jewish allies. Muslims accept the Judeo-Christian tradition as part of Islam itself. The Qur’an considers Jews, Christians, and other monotheists to be believers with a hope of heaven, not “infidels.”

In fact, up to half of the early (post-7th century) Christians in the world lived in Muslim-ruled lands, not Europe, and they did personally know Muslims. But because these Christian records were in Syriac, which few Western scholars could read, modern Western history doesn’t include their views. Instead, our modern Western views of Islam come from European records, from people who only met Muslims on the battlefield.[2]

The image of the feared and loathsome Muslim mutated over the centuries, from “Saracens” in the earlier centuries to monsters of the Middle Ages (often depicted with blue, black, or purple skin![3]) to mainly Ottomans or Turks in the Renaissance, to the Victorian savages of Orientalism and colonialism, fanatics and barbarians whom the white man had an obligation to colonize and civilize. As political power shifted from the Ottomans to the Europeans, fear decreased and contempt replaced it, but the negative stereotypes never abated.

These tropes survive largely intact, sometimes verbatim, into the present day. They infuse all aspects of our culture, including the secondary-school textbooks that educate us, the literature we still read, the narratives from which we learn world history, the artwork we study, the internet we find indispensable, the news media that conditions us and has been conditioned itself by our cultural biases, and the television and movies that overwhelmingly portray the only good Muslims as dead Muslims. Or, at best, “secular” Muslims.

In America, we inherited this historical and cultural tradition—this framework—from the British, though it was mostly dormant until the Iranian Revolution of 1979. Then, almost overnight, it resurged, and negative current events began to be fitted into that same historical tradition, framed as confirmation that Muslims were to be feared and loathed and not like us. Whenever Muslims commit criminal acts, such as 9/11 (which absolutely violated Islamic law in countless ways), these are seen as confirmation of this anti-Muslim tradition, rather than criminal acts committed by the same kinds of outliers that exist in any community.

It’s important to understand that Islamophobia need not arise from intentional hatred or malicious intentions. We’re all conditioned to think a certain way about Islam and Muslims. That’s what makes Islamophobia systemic, just as anti-Black prejudice in this country is systemic.

Systemic, or structural, Islamophobia means discrimination embedded into our institutions, government, policies, and media. The two dimensions of Islamophobia—individual and structural—feed on each other. Governmental policies (like war-on-terror and surveillance policies) endorse anti-Muslim stereotypes and validate individual Islamophobia. In return, individuals with Islamophobic views spur those in government to enact more policies targeting Muslims. For example, Muslim criminals on average get sentences four times longer than non-Muslims committing similar crimes, and they are covered seven times longer in the media, [4] which increases Islamophobia in individuals and results in more systemic discrimination.

What can we do? Education is critical! Islamophobes cannot pull the wool over our eyes if we know some basic facts about Muslims. We must stop giving Islamophobes a platform, pressure our news media to stop covering Muslims only in negative contexts, celebrate portrayals of Muslims as normal people, and perhaps even meet a few. Then perhaps we can set aside over a thousand years of prejudice.

Sumbul Ali-Karamali grew up in California in a South Asian Muslim family. She earned her bachelor’s degree (BA) in English from Stanford University. She earned her law degree (JD) from the University of California at Davis. She practiced as a corporate lawyer for several years and then attended the University of London’s School of Oriental and African Studies (SOAS), from which she earned her masters degree (LLM) in Islamic Law. She has published The Muslim Next Door: the Qur’an, the Media, and that Veil Thing, Growing up Muslim, and Demystifying Shariah. She is also an activist in Muslim community and women's causes. Her home page is Sumbul Ali-Karamali.