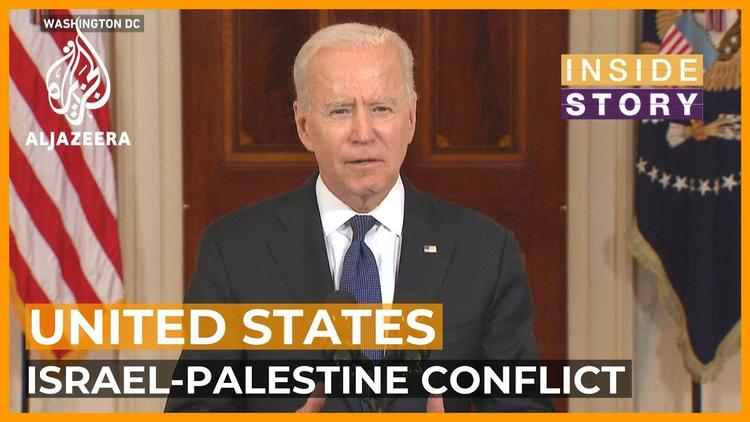 The Biden administration thought it could muddle through with the usual pro-Israel platitudes, but rising awareness of Israeli apartheid is making that impossible.

Why did Biden take so long to respond to the violence as it spiraled out of control in Jerusalem and Gaza? Why do Biden’s repeated “Israel has the right of self-defense” litanies so closely match the positions of his predecessor, despite the wide disparity between Biden and Trump policies on so many other issues?

Throughout his campaign and the first months in office, President Biden made his main priorities clear: the pandemic and the economic crisis it created. People across the United States are suffering, and Biden’s first tier of importance has been to deal with those intersecting crises.

That makes a lot of sense — but there are consequences. Foreign policy, for one, gets virtually no priority. And transforming U.S. policy towards Israel-Palestine? Not on the agenda at all. Biden has yet to even appoint an ambassador to Israel, and waited nearly a week into the current crisis to send a special envoy.

There have been no meaningful policy shifts so far — only some effort to supplant Trump’s hardline language. Even then, Biden’s team only slowly, even reluctantly, began to respond to the violent escalation of Israel’s treatment of Palestinians across occupied East Jerusalem and the West Bank, inside pre-1967 Israel, and especially in its air war against the Gaza Strip.

The administration seemed to want to hold on to their operative position that “it’ll just have to wait.” Until suddenly it couldn’t wait, because the escalation of violence veered out of control.

The longstanding reality of Palestinians facing violence and eviction, living under occupation and blockade, denied the right to move, and being killed by Israeli settlers, police, and military forces — that’s all considered normal in official Washington. But when Israelis were suddenly threatened with the primitive rockets from Gaza, that turned it into a crisis.

During a briefing in the first days of the crisis, journalists pushed back against White House press secretary Jen Psaki’s familiar statement that Israel has “the right to self-defense.” They asked whether Palestinians also have the same right. But while she had said in other circumstances that “Palestinians and Israelis deserve equal measures of freedom, security, dignity and prosperity,” she had to twist herself into a verbal pretzel to avoid saying the words she had clearly been ordered not to say — that Palestinians also have the right of self-defense.

But amid rising opposition to this uncritical support for Israel from within Biden’s own party, this usual line hasn’t been sustainable. Biden himself has dealt with the tension by largely avoiding most public comment on the issue. But now, others in his administration are using language that not so subtly criticizes Israeli actions alongside Hamas’s.

When Biden’s UN ambassador Linda Thomas Greenfield pushed “all parties to protect medical and other humanitarian facilities, as well as journalists and media organizations,” she was talking to Israel, not Hamas. The U.S. is “particularly concerned about protecting UN facilities as civilians seek shelter in about two dozen of them,” she added. Israeli airstrikes have destroyed medical, media, and UN facilities alike.

Similarly, when Greenfield urged all parties to avoid “evictions — including in East Jerusalem — demolitions and settlement construction east of the 1967 lines,” she was talking about Israel’s threatened evictions of Palestinian families from Sheikh Jarrah to turn their homes over to Jewish settlers.

Greenfield has also called for an end to the home demolitions and settlement expansions that have been going on in occupied East Jerusalem and the West Bank for more than 50 years. That’s all on Israel — Palestinians are not dispossessing Jewish families of their homes.

So the language is changing. But the fundamental challenge is when and how will the policy change?

Despite hints and claims to the contrary, the Biden administration does have a policy in place on Israel-Palestine. Biden’s gone back to assert support for the widely discredited “two-state solution” that Trump discarded. But the rest of his policy so far preserves Trump’s recognition of Jerusalem as the sole and undivided capital of Israel. It includes keeping the U.S. embassy in Jerusalem, in violation of international law and UN resolutions.

And it maintains the false claim that settlements are not illegal, paving the way for Israeli annexation of huge swaths of West Bank territory. Nor has the Biden administration issued a word of criticism regarding Israel’s 2018 “Nation-State Law” that states that only Jews, no other citizens of Israel, have the right of self-determination in Israel.

Those policies sound pretty extreme — and they are. They violate international law, they defy longstanding U.S. diplomatic practice (which was already overwhelmingly pro-Israel), and they guarantee permanent oppression of Palestinians.

Do Joe Biden and his top policy advisers actually believe in all that? Probably not. But those are the components of the policy that Biden inherited from Trump. And however extreme they may be, until Biden changes the actual policy, not just the rhetoric, they remain U.S. policy.

Beyond helping to end the devastation underway in Gaza, Biden could, in a minute, transform U.S. policy towards Israel and the Palestinians to one that actually reflects the human rights he claims are central to his foreign policy.

He could announce the U.S. embassy is leaving Jerusalem to return to Tel Aviv. He could acknowledge the clear reality that settlements are illegal, and that annexation is an unacceptable act of further colonial expropriation. And Biden could state unequivocally that regardless of how many states there are, U.S. policy towards Israel and towards the Palestinians from now on will be based on human rights and equality for all — for everyone, from the river to the sea.

If he looks carefully at U.S. opposition to Israel’s apartheid policies — now rising among young people, Democrats, African-Americans, Jews, and so many others across the country, as well as in the media and even in Congress — he’ll realize changing his own policy is just not that hard.

Equality for all — turns out it’s pretty popular in this country too.

Al Jazeera English: “Is U.S. opinion shifting on the Israel-Palestine conflict? | Inside Story”