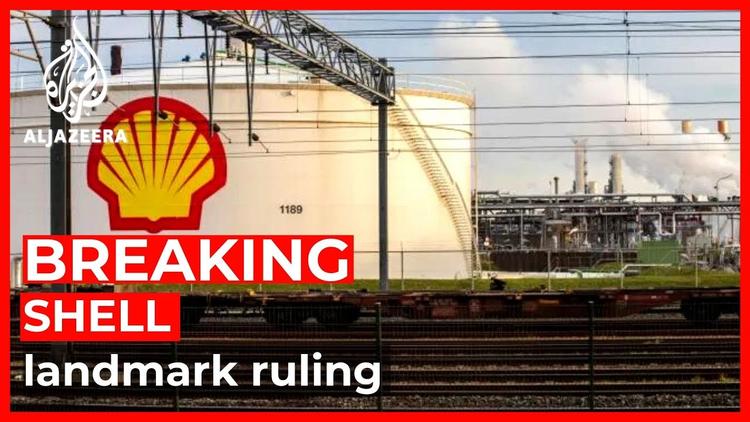 Ann Arbor (Informed Comment) – In a historic ruling, a tribunal in the Netherlands has ruled that Royal Dutch Shell must reduce its and its customers’ carbon dioxide emissions by 45 percent by 2030 from its 2019 base, according to Le Soir. Shell had already committed to a 20 percent reduction by that date, but now must scramble to more than double the planned cut-back in only nine years. The ruling is harsh, since Shell’s business model has for over a century been to produce carbon dioxide emissions.

The Dutch branch of Friends of the Earth (Milieudefensie) launched the suit along with several other non-governmental organizations (NGOs), such as Greenpeace, with 17,000 Dutch citizens also signing on. Their case argued that the Netherlands had signed the Paris Climate Accord, which seeks to keep extra global heating to 2.7 degrees F. (1.5 degrees C.). These seem like small numbers, but during the last ice age temperatures were only 6 degrees below the current global average, which produced a mountain of ice over Manhattan and Detroit three miles high.

Milieudefensie’s lawyer, Roger Cox, said, “This is going to change the world.” Indeed.

The ruling only affects Shell’s emissions in the Netherlands. But the plaintiffs pointed out, according to EuroNews, “Shell is the biggest polluter in the Netherlands. The company emits nine times as much CO2 as the entire Netherlands combined. Shell has known since the sixties that the use of oil and gas are harmful to the climate.”

Shell’s attorneys unsuccessfully argued that governments, not private companies, should be responsible for ameliorating climate impacts.

Moreover, the likelihood is that the ruling will influence other judges in other countries. This could be like the moment when the first court in the U.S. imposed penalties on a tobacco company for killing its customers with lung cancer.

In the 1980s, Shell had its scientists assess the likely damage its carbon dioxide emissions would cause to the earth and its people, and they concluded it would be catastrophic. The Shell executives covered up the findings and ran disinformation campaigns against climate science. In other words, some people high up in that Anglo-Dutch company are psychopathic monsters beyond anything ever dreamed in the James Bond films.

Shell, like other big polluters, does a lot of greenwashing, so you may have heard it is turning to green energy.

Not so much. Only 4 percent of its expenditures are in the area of renewable energy.

Friends of the Earth and the other NGOs argued in court that the Netherlands could not hope to meet its treaty obligations under the Climate Accord unless a handful of giant corporations who were responsible for the lion’s share of emissions cut back their production of carbon dioxide substantially.

You see now why ExxonMobil had Trump take the US out of the Paris climate accord. As a treaty, it can produce legal obligations that can be adjudicated in the courts.

“This is great news for all of us, ourselves and our children. Shell will adjust its policy so that it will also emit less CO2 in real-time. It is not up to the judge to say how Shell should do this, but the company will not be able to continue pumping as much oil and gas as they do now. Even if Shell decides to appeal, the ruling will lead to more cases worldwide and politicians and oil and gas companies will feel the pressure to change their course.”

The ruling had a precedent. In 2019, Steve Hanley at Cleantechnic wrote, the Netherlands Supreme Court ordered the government itself to reduce CO2 from natural gas emissions by 25 percent below 1990s levels by the end of 2020. The court in that case depended on the European Convention on Human rights, saying, “a reduction obligation of at least 25 percent by end-2020, as ordered by the district court, is in line with the State’s duty of care.”

When the Dutch government attempted to argue that its reductions would have only a small global impact, Hanley reported, Justice Streefkerk replied icily, “Every country is responsible for its share.”

Shell’s predecessor company was formed in 1890 to exploit the petroleum in the Netherlands’ colonial possession of Sumatra in what is now western Indonesia. So it not only helped wreck the world, but did that as part of the imperial brutalization of the people of island southeast Asia. Royal Dutch Shell was formed in 1908 in a merger with a British company, in an attempt to compete with Standard Oil. The two became part of what in the later twentieth century became known as the Seven Sisters, oil majors who sometimes dictated foreign policy to presidents and prime ministers. By 1970 they controlled 75 percent of the world’s petroleum, taking the profits for themselves even though the wells were in Iran, Iraq, Indonesia, etc.