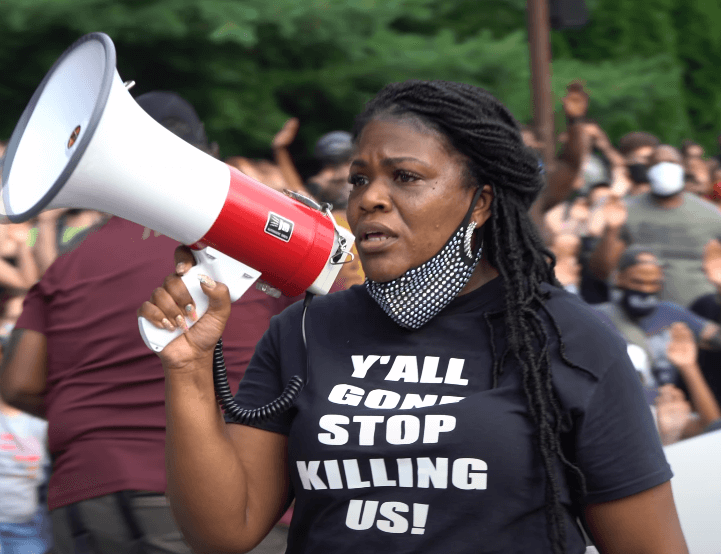 Rep. Cori Bush’s statements in support of Palestinians during the most recent uprising reflect how the US discussion of Israel-Palestine is increasingly impacted by the anti-racism and anti-colonialism of the Black Lives Matter movement.

(Mondoweiss) – Rep. Cori Bush’s (D-Missouri) statements in support of Palestinians during the most recent uprising are a significant intervention in the US Israel-Palestine debate. In particular, she references the term apartheid to illustrate comparable structures of oppression at work in both contemporary Israel-Palestine and Ferguson, Missouri, while her support for Palestinians speaks to the organic nature of Black-Palestinian solidarity. Moreover, Rep. Bush’s co-sponsoring bill H.R.2590 represents a legislative way to impose conditions on US military aid to Israel.

On May 13, Congresswoman Cori Bush of Missouri’s 1st District of St. Louis gave a speech on the House floor. In response to the rising violence in Israel-Palestine she stated,

“St. Louis and I today rise in solidarity with the Palestinian people […] The fight for Black lives and the fight for Palestinian liberation are interconnected. We oppose our money going to fund militarized policing, occupation, and systems of violent oppression and trauma. We are anti-war. We are anti-occupation. And we are anti-apartheid. Period.”

Predictably, conservative media outlets roundly criticized Bush for her stance, while representatives from among the collection of Democrats affectionately known as “The Squad,” also spoke out in support of the Palestinians. However, Bush’s contribution to the debate over Israel-Palestine represents a distinct intervention that is significant in its own right.

We oppose our money going to fund militarized policing, occupation, and systems of violent oppression and trauma.

We are anti-war. We are anti-occupation. And we are anti-apartheid. Period. pic.twitter.com/DO42FEre0W

In the current US Israel-Palestine debate, what has been most notable is the increasing usage of the term apartheid to describe the situation Palestinians face: be it in the occupied Palestinian territory in East Jerusalem, Gaza, and the West Bank that fell under Israeli control following the 1967 War, or within Israel itself. Many Israelis bristle at the term apartheid, especially when it used rhetorically to describe the essence of the Israeli state or imply that the Zionist project to build a Jewish state is in itself a racist endeavor. However, it is noteworthy that Rep. Bush does not use the term in that way. In her May 13 speech, Rep. Bush recalled her relationships with Palestinian solidarity activists during the Ferguson Uprising saying,

Here, as Rep. Bush elaborates on her reference to apartheid we can see further that her usage of the term describes a comparable set of structures, laws, and policies that facilitate the domination of one group over another, which could be dismantled given the right conditions and political will. Thus, in Rep. Bush’s argument apartheid is a useful term that sheds light on the situation of structural racism at work in Ferguson (a city within greater St. Louis that rose up following the police killing of Michael Brown Jr. in 2014) and contemporary Israel-Palestine. This reference is similar to that used by B’Tselem and Human Rights Watch to describe the situation of structural racism in contemporary in Israel-Palestine rather than as a means to argue there is an essential similarity with Apartheid South Africa. In Ferguson, though these apartheid structures operate in a distinct way, for Rep. Bush the similarities with Israel-Palestine are clear. As Bush put it in an earlier statement on May 10, “As someone who has been brutalized by police, I continue to stand in strong solidarity with Palestinians rising up against military, police, and state violence.” Bush made that statement in response to the then breaking news that Israeli police had injured hundreds of Palestinian worshipers at the al-Aqsa mosque compound in Occupied East Jerusalem. To Bush, then, the current structure of apartheid in Israel-Palestine facilitates not only expulsions of Palestinians from their homes, which was the legal process unfolding in the East Jerusalem neighborhood Sheikh Jarrah that sparked the most recent violence, but also the “brutalization” of Palestinian worshipers at prayer at the al-Aqsa mosque compound, one of Islam’s holiest sites.

In her May 13 statement, Bush cited Bassem Masri as inspiration for her stance. Masri was a Palestinian from St. Louis and Jerusalem, who had been a leading solidarity activist during the 2014 Ferguson Uprising. In particular, Masri was remembered for his live-streaming of events in Ferguson as they unfolded and giving the protesters a voice to the world. Masri passed away in 2018, and Bush drew on her memory of him saying, “Bassem was one of us. Bassem showed up ready to resist, to rebel, to rise up as St. Louis mourned Michael Brown Jr.’s state-sanctioned murder […] I remember Bassem putting his life on the line for us.” Bush’s memory of Masri and other Palestinian solidarity activists facilitated her comparisons with the Ferguson Uprising and the struggle of the Palestinians, “Palestinians know what occupation of their communities look like […] they know this reality and so much more. So, when heavily militarized police showed up in Ferguson in 2014, Bassem and so many others of our St. Louis Palestinian community, of our Palestinian siblings, showed up too.”

Rep. Bush’s words, “Congress must stop funding human rights abuses by the Israeli military” are backed up by action. She is one of 18 co-sponsors of H.R.2590, a house bill introduced on April 15 by Rep. Betty McCollum (D-Minnesota). H.R.2590 seeks to impose conditions on US taxpayer aid to Israel. One of these conditions is that US taxpayer aid is not used for, “the unlawful seizure, appropriation, and destruction of Palestinian property,” precisely what was occurring in Sheikh Jarrah and sparked the most recent upsurge in violence. Indeed, the US gives approximately $3.8 billion to Israel every year, most of which is spent on the military. In a context where President Joe Biden’s own staffers have published an open letter calling for accountability for Israel’s use of force, Rep. Bush and her colleagues’ effort the condition US military aid to Israel is an important contribution, and can help bring a negotiated peace a little closer. Indeed, Bush drew a further comparison between the Palestinian situation and that of Black Americans with regard to the call to “defund the police” in cities like Ferguson and greater St. Louis by redirecting funds toward projects that would arguably have a greater impact on public safety. Rep. Bush said,

“That’s what we fund when we send our tax dollars to the Israeli military […] if this body [Congress] is looking for something productive to do with 3 billion dollars instead of funding a military that polices and kills Palestinians, I have some communities in St. Louis City and St. Louis County where that money can go.”

For Bush, then, effectively defunding US military aid to Israel would provide billions of dollars a year for more worthwhile projects. Notably, by all accounts the US debate over Israel-Palestine has shifted in recent weeks, both politically and among the public, a fact evidenced by Sen. Bernie Sanders’s widely-supported resolution to block a $735 million arms sale to Israel on the basis that such sales may be “simply fueling conflict.” The US discussion of Israel-Palestine is increasingly taking place within a new framework under girded by the Black Lives Matter movement, anti-racism, and anti-colonialism. Bush’s interventions are particularly significant for this change, and she will surely continue to be a major figure going forward.

Dr. David Warren is a Postdoctoral Research Fellow in the Department of Jewish, Islamic, and Middle Eastern Studies at Washington University in St. Louis.

Reprinted with the author’s permission from Mondoweiss

Mondoweiss is an independent website devoted to informing readers about developments in Israel/Palestine and related US foreign policy. We provide news and analysis unavailable through the mainstream media regarding the struggle for Palestinian human rights. Founded in 2006 as a personal blog of journalist Philip Weiss, Mondoweiss grew inside the progressive Jewish community and has become a critical resource for the movement for justice for Palestinians.