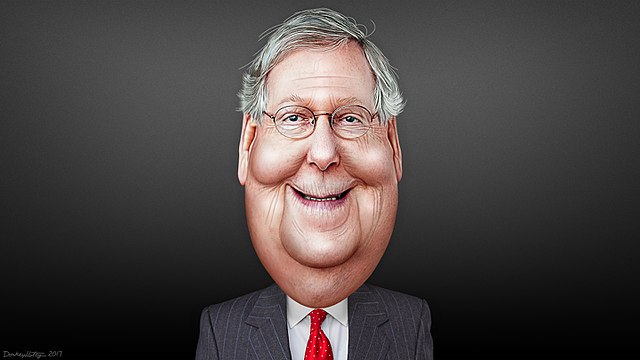 Mitch McConnell will go down in history as one of the most destructive men in American History. If obstructing all the positive legislation and court nominations of President Barack Obama wasn’t enough; if enabling all the horrors and cruelties of President Donald Trump wasn’t enough; if brazenly changing Senate rules to undermine . . . let’s call it Democracy wasn’t enough; if dispensing with his reasoning for not giving a hearing to Merrick Garland, and then changing the Senate rules again to ram the Barrett SCOTUS nomination through the Senate wasn’t enough; now comes McConnell’s greatest attack on Democracy yet. It is commensurate with the scale of the terror inflicted on the U.S. Capitol on January 6. He is now officially the “Shepard of Shame,” for blocking the Congressional investigation into the causes and responsibility for the riot. He is protecting the criminals who threatened the lives of his colleagues and his own. All in service to Donald Trump and the millions of morons whom he inspired to come out and act out their violent, racist fantasies.

He is protecting the members of his party, whom he shamed earlier this year for trying to block certification of President Joe Biden’s election: criminals such as Senators Josh Hawley, Ted Cruz and Representative David Kustoff, among others. In doing so, he has officially given the Republican Party over to Trump and truth-deniers such as Rep. Lorena Boebert (who recently passed her GED just before getting elected.) He is giving credence and standing to Rep. Marjorie Taylor Greene, who has not only trivialized the Holocaust, but used it as a political prop by comparing mask mandates to the madness of the Holocaust.

McConnell and his flock don’t want America to know the extent of Trump’s role in trying to undermine the legitimacy of Biden’s presidency, or those of Roger Stone, Reps. Mo Brooks and Madison Cawthorn. McConnell is protecting these people from the consequences of the greatest betrayal in American History. We won’t know if Trump’s operatives sabotaged police and National Guard response to the riot. So we are left to assume that is true, but they will never be held accountable.

As a result, Dante is excavating a new, deeper Circle of Hades, beneath that of the common traitors. The new layer is for special traitors, who have betrayed every function and ideal of representative democracy and the American Revolution. These are traitors who have expressed greater confidence in former KGB Director Vladmir Putin, than in America’s own intelligence agencies. Traitors who have expressed affinity for the very forces America and the free world defeated in World War II. Traitors who align themselves with the forces defeated in the American Civil War. They have betrayed every war veteran since the American Revolution, not to mention the millions of people suffering the consequences of Trump’s anti-human agenda.

McConnell is protecting Texas Attorney General Ken Paxton, who argued that states that actually counted their votes and certified Biden as the winner had “capitulated” to some nefarious, anti-democratic force. He is protecting the dark princes, Eric and Don Jr. and Gavin Newsom’s ex-wife Kim Guilfoyle, who riled the crowd with challenges to “be a hero or a zero.”

He is protecting Amy Kremer, who barnstormed the southeastern states, rallying the Trump faithful to go to Washington and fight to overturn the election. He is protecting Q-Anon, Proud Boys, 3%’ers and other openly fascist organizations, and the elected officials who give them cover and faux legitimacy.

McConnell argues that a January 6 commission would be superfluous, because of existing investigations by local law enforcement agencies and the Justice Department. He said, ““It’s not at all clear what new facts or additional investigation yet another commission could lay on top of the existing efforts by law enforcement and Congress.” The problem with that dismissive tactic is that criminal investigations investigate crimes; not the motivation, networking and planning behind them. A formal commission would look into the instigators, who have not been charged with crimes. A commission could determine how the rioters got to Washington, what they did when they got home, and what they did during the riot. McConnell and Trump don’t want anyone to know the motivations of the 500 criminals who have already been charged. This gives cover to the Fox News and ONE Network truth benders who still say the rioters were antifa operatives DISGUISED as Trump supporters.

The Justice Department and local law enforcement look into the individuals charged with crimes, but not the broad network conspiratorial activities that lead up to January 6. That is what the commission is for. The existing Congressional investigations are focused on police and security failures, but not what fueled the violent mob.

Bipartisan investigations build and foster trust across the aisle. Under McConnell’s leadership bipartisanship has died. The commission would insure that there is never a repeat of January 6. McConnell wants to leave that possibility on the table, because Republican hegemony has become more important to 30% of America than the health and security of the Republic. He has made “country over party” a quaint and dated concept, with no sense of shame.

McConnell is protecting at least three members of Congress who gave recon tours to the rioters the day before. He is protecting extremist groups from being investigated for their planning, coordination and networking. We’ll never know who else was involved beyond those already charged, and there could be many.

McConnell is not interested in preventing a recurrence of the greatest attack on American Democracy in history. And he is enabling Congressional reps such as Rep. Andrew Clyde (R-GA), Andy Biggs (R-AZ) and Ralph Norman (R-SC) to continue their efforts to peddle fictions, and re-write the history of that day with no interference of challenge. The Republican Party is no longer about standing up for police, truth or the founding principles of the Republic. It remains deeply invested in protecting Trump’s fictions. Clyde said the whole thing was a normal tourist visit. And it was a bunch of French tourists who stormed the Bastille on July 14, 1789 staying within the velvet ropes.